Through The Ages, A Hero Remains

One character's name appears over and over in world literature.  Most readers and listeners of nursery rhymes, folktales and fairy tales can name him.  He can jump over a flaming candle stick, pull out a plumb with his thumb, eat no fat, build a house, fetch a pail of water, grow a stalk that reaches into the clouds from a magic bean, paint frost or triumph over giants.

In the eastern mountain regions of the United States his stories are so numerous they warranted their own collection.

Jack, of the Jack Tales, embodies some of the common characteristics of culture hero.  He is the third son---the magic number.  He is the honest, straightforward, guileless one who never suspects the tricks and deceptions of others.  He is the western European hero who lacks all sophistication but is exceptionally clever. 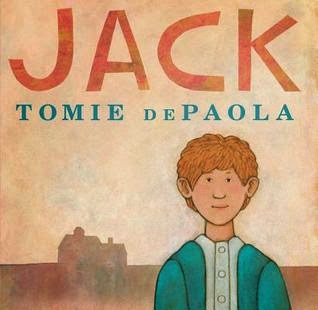 Leaving home to search for wealth, success or a home of his own is a common theme in the Jack tales.  Master storyteller Tomie dePaola in his most recent title, Jack (Nancy Paulsen Books, an imprint of Penguin Group (USA), September 16, 2014) spins his own singular version for our youngest readers.

This is a story about Jack.
Jack lived with his grandpa
on a tiny farm way out
in the country.

Jack has decided to seek a life for himself in the city, hopefully making new friends.  He is not sure how to do this but his grandfather is positive the king can offer sound advice.  Wearing new shoes, Jack journeys toward the King's castle.

That's the sound Jack hears as he walks down the road.  The first being he meets is a peeping chick.  The curious bird wants to know where Jack is going.  When the chick hears the answer he wants to come along.  Jack is only too happy to have the company.  Now there are two sounds as the duo head toward the city.

In short order a duck, a goose and a dog have joined the travelers.  Each with their unique tones makes a cheery tune as they continue on their quest.  Other curious animals ask to become part of the group.  Eleven animals trail behind and with Jack as he gets his first sight of the homes and buildings at his destination.  A cawing crow serenades the adventurers adding his voice to the chorus.

At the entrance to the royal residence a friendly guard greets Jack and his companions.  When Jack questions the King about finding a home in the city, the King, having heard about the band headed in his direction, offers him a key and some encouragement.  Jack and his new pals gladly welcome the challenge. A feast for one's eyes, ears and heart assures everyone the neighborhood will never be the same.

Simple sentences with faithful attention given to word choices mark the voice of a gifted wordsmith.  Tomie dePaola clearly understands his audience.  Each time Jack meets an animal a new sound is introduced but the same questions are asked and answered in a refrain promoting participation by listeners.  It's interesting to note after the chick joins Jack the

"I'm going to the city to ask the king for a house,"
answered Jack.

In my way of thinking this says something about the character of Jack and his willingness to be a friend.

The matching dust jacket and book case not only introduce readers to Jack but give a before and after glance of the two different locales in which he resides.  The back or image on the left is of the street in the city where he and his friends find their home.  A lighter wash, in the same shade as Jack's coat and the author's name on the front, covers the opening and closing endpapers.  Jack's home in the country is shown on the title page and the first two pages.  Tomie dePaola inserts a decorative dedication into the landscape.

with acrylics on Arches 140 lb. cold-press handmade paper that was first coated with gesso.
The animal sounds were created with specially made rubber stamps reproduced from hand-lettering.

On the second reading of this book I think I gasped aloud when I discovered how deftly dePaola had included more elements from nursery rhymes, fairy tales and childhood games in each of the pictures.  I was initially enjoying his admired use of line, facial expressions and animated creatures, tiny bugs, a worm, a snail and birds, and folkloric items like hearts, when I noticed a hill being climbed by two familiar people.  What a gift to readers this is!

One of my favorite illustrations is of Jack and his companions arriving in town.  They are shown in silhouette in a line on the road looking at the city.  All their voices are raised making their individual sounds.  In the foreground dePaola has placed a gated stone wall (Guess who's sitting on that?) with townspeople in front of yet another fence.

Children and those young at heart are going to relish Jack written and illustrated by the esteemed Tomie dePaola.  This is one of those wonderful books which get better with every reading.  I can already hear children peeping, quacking, honking, woofing, oinking, mooing, croaking, meowing, baaing, neighing and hooting.  When you add in the crow and the creaky new shoes, it's a musical menagerie.  Finding all the tiny extras Tomie dePaola has inserted is pure bliss.

For more about Tomie dePaola and his huge body of work please visit his website by following the link embedded in his name.  You might enjoy reading these three interviews with Tomie dePaola after he received The Society of Illustrator's Lifetime Achievement Award.  They are here, here and here.  I thank you with all my heart Tomie dePaola for all your books, maintaining a connection with my Mom and for being a common bond between the two of us.  You will always be remembered with great affection. 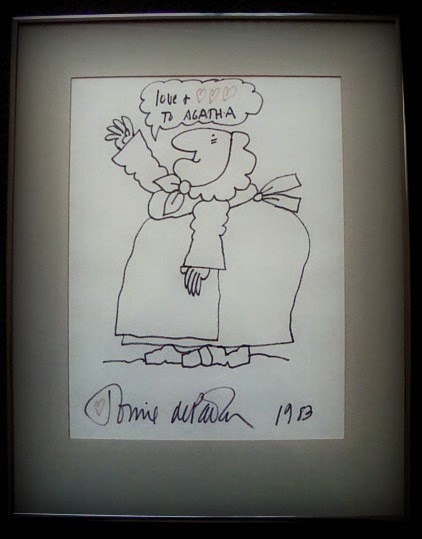