In thinking about writing this fourth post about favorite titles used to express gratitude I can't ignore the snow-covered landscape outside my window.  For the second November in a row we have had plenty of snowfall beginning in the middle of the month; even prompting an early snow day for our schools.  I can't help but think the natural world might be sending us a message.  There will be those who say it's part of a cycle or some propose it's a result of global warming and climate change but perhaps it is a signal to simply slow down more.  We need to take time to pause and ponder; to appreciate all the goodness in our lives, even the littlest of things.  My three previous posts, Thanksgiving Treasures-Tradition, Thanksgiving Treasures-Tradition #2 and Thanksgiving Treasures-Tradition #3, highlight the following six titles. 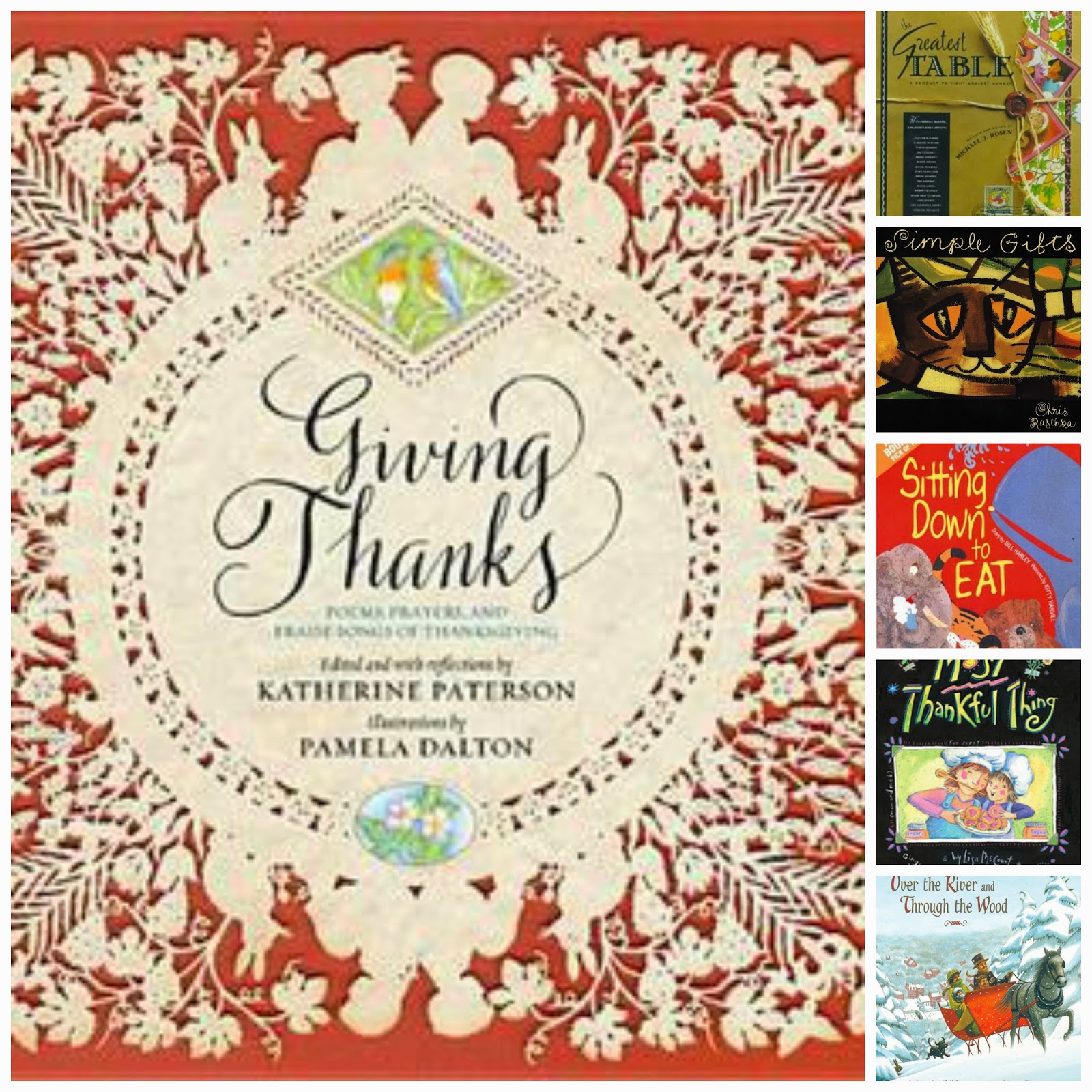 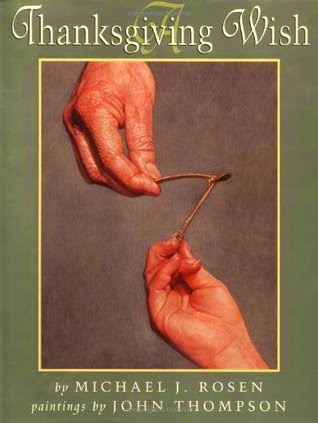 Back in 1999 The Blue Sky Press (an imprint of Scholastic Inc.) released Thanksgiving Wish written by Michael J. Rosen with paintings by John Thompson.  In collaboration the two bring readers a heartbreaking and heartwarming book based upon tradition, family and making memories.  You truly wish you could talk to both of them to see how the narrative and artwork were created.  Is this story based upon a real life experience?  Who served as models for the people in the pictures?
ONCE A YEAR, ever since Amanda knew the word Thanksgiving, her family would travel to her grandmother Bubbe's house for the holiday.  Even more than Chanukah or Passover or the other Jewish holidays that Bubbe loved to share with her family, Thanksgiving had always been Bubbe's special holiday.

Amanda's grandmother spends the entire month of November cooking dishes, the same dishes year after year, to serve to her family at Thanksgiving.  It is a gift from her heart.  While all the food and family, uncles, aunts and cousins, is an important part of the day, it's right before falling asleep when the best part happens.

All year long Bubbe saves the wishbones from the birds she cooks so every single child can make a wish.  She comes to them at bedtime holding various sizes in her hand depending on the size of the wish needing to be granted.  After the pull, whoever has the largest piece is sure to get their wish fulfilled.  Even when Amanda asks Bubbe she will never talk about her wish.  If a wish is shared it can't possibly come true.

When Bubbe passes away, the first Thanksgiving without her is to be held at Amanda's family's new house; a very large, very old house.  Using her Grandmother's recipes kept in a special file, Amanda, her parents and two sisters try to cook up a feast the day before all the relatives arrive.  They continue through the night working together.

On Thanksgiving morning, they keep on preparing and cooking food.  It is a rainy gloomy day.  When two sets of uncles, aunts and cousins arrive they are soaking wet.  Being told by Amanda's mother dinner will be a little late, they settle in, drying themselves out, watching television and talking about Bubbe.  Suddenly all the lights go out.  There is no power.

Everyone else in the neighborhood is fine.  Fuses in the old electrical system can't be replaced until the following day.  A knock at the door announces the beginning of a day like no other, a day of gratitude, remembering and the creation of a new tradition.

Characters so real they could be your next-door neighbor woven into events so true to life they must have happened are the mark of Michael J. Rosen as a storyteller.  His blend of narration and dialogue between the characters make readers feel as if they are there.  He understands the dynamics of families and the connection between children and their grandparents.  Here is a sample passage.

The Thanksgiving before Bubbe died, as unexpectedly as anything you want to live forever dies, Amanda asked her a question. "Bubbe, I've always wondered:  What are you wishing for tonight?  I know we're not supposed to tell, but maybe...well, can you tell me what you wished for last year?"

Her grandmother held out the wishbone for Amanda to grab, and said, "Tonight?  Last year?  I'm wishing for the same thing I wish for every time."

The illustrations, the paintings, on the matching dust jacket and book case are images taken from the interior of the book.  The grandmother's and child's hand getting ready to make a wish and Amanda's mother holding her at the Thanksgiving table as she tells Amanda and the rest of the family, Bubbe's wish each year.  Opening and closing endpapers are a warm, golden brown.  A single wishbone is framed on the title page.

John Thompson includes a full framed picture on a single page with a small detailed inset on the opposite page within every two pages.  The skill in his paintings is so masterful as to be photographic in quality.  It appears as though he might use some type of underlying wash giving all his illustrations a glow.  The play of light and shadow are stunning.

One of my favorite illustrations is of Amanda lying in bed with Bubbe offering her the choice of three wishbones.  They are both smiling in anticipation.  Everything, the facial expressions, body postures, clothing, hair, quilt on the bed, teddy bear and angel hanging on the bedpost, speaks of comfort and love.

Without a doubt attending the National Storytelling Festival in Jonesborough, Tennessee for several Octobers over the years, is a lifetime highpoint.  I, with many others, listened in fascination to Native America teller and author, Joseph Bruchac.  Listening to him tell stories or reading his many books, gives us valuable insights into the culture from which he comes. 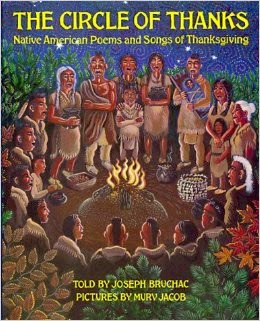 THE CIRCLE OF THANKS
As I play my drum
I look around me
and I see the trees.
The trees are dancing
in a circle about me
and they are beautiful. ...

Beginning on the northeast coast with the Micmac people we are introduced to the importance of the drum, the circle it represents and sending praise for the trees, sun, moon, stars and people.  Mother Earth is shown honor by the Mohawk for her constant and strong presence.  Without rain, the Papago of the southwest would be unable to sustain themselves with their corn crops.  Praise for both can be found in their traditions.

The Cherokee of the southeast and the Kwakiutl of the northwest coast pay tribute to the blessings bestowed on their people by the generosity of plants and trees.  The Kwakiutl of the Pacific Northwest believe if gratitude is expressed to the black bear for the giving of their life, traits of that bear will be passed to the hunter who killed it.  In the southwest the Hopi sing to the Kachina who come to their villages dancing, depicting things in the universe over which they have no power.  These songs are sung in thanksgiving.

Songs and poems about thunder from the Navajo, the sun from the Osage and the stars from the Pawnee of the southern plains signify the appreciation held for these natural wonders.  The final piece, WORDS CALLED TO THE FOUR DIRECTIONS, is a reverent plea for calm and peace everywhere.  This collection pays tribute in words as true today as when they were first uttered.

Joseph Bruchac opens this book with a note to the reader and closes with an afterward.  He also provides two pages of further explanations about each of the thirteen poems and songs and the beliefs of the people. Each telling can be easily understood by even younger readers providing points for discussion and further research.  There is a feeling of devout respect to be found on every page.  Here is one of the poems.

SONG TO THE DANCING STARS
Look as they rise,
look as those stars rise
there over the line
where the earth meets the sky.

Those Star Dancers,
they rise up together.
Look, as they rise up,
how they come to guide us.

They lead us safely,
they keep us as one.

Dancing Stars,
we watch you as you rise.
Teach us to be, like you, united.

Each illustration with the exception of the front dust jacket, book case, title page and final page spans across two pages.  These paintings by Cherokee artist, Murv Jacob provide a background for the framed text set upon each of them.  A full color palette evoking seasons, housing, activities and dress are done with infinite care.

In all the images flora and fauna native to a specific area are showcased focusing on one or more element as well as the people.  Jacob chooses to alter his perspective by providing us with a panoramic or close-up view depending on the poem or song.  One of my favorites is for the shared Pawnee poem.

It is night with the sky a swirl of tiny colored dots.  Seven stars are brighter than the others with the bodies of women outlined in the sky attached to them.  Beneath the sky is a grassy plain upon which three riders gallop on their ponies.  In the lead is a woman followed by two men.