How Deep Will You Go?

Place a child in a sandbox or a patch of dirt.  Give them a pail and a shovel.  I can guarantee they will be content for hours.  I'm pretty confident I was.  Over the years with gardeners for parents, my play advanced to the more cultivated pursuits of landscaping but nevertheless digging in the dirt is still a desired pastime.  Fourteen years ago I met my match, discovering a true champion in the art of hole-making, my chocolate Labrador retriever Xena.

She can't be near a beach and water (or any stones and nearby dirt for that matter) without doing two things, diving for or grabbing rocks and creating enormous holes in the sand.  When she digs both front paws are used simultaneously in sync until the space is so big, not only will the rock be buried but she disappears from view.  (Those boys at Camp Green Lake (Holes by Louis Sachar) certainly could have used her skills.) 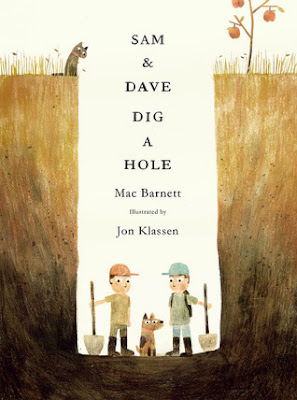 In the most recent collaboration between author Mac Barnett and illustrator Jon Klassen (Extra Yarn, Balzar + Bray, January, 2012, Caldecott Honor and Boston Globe-Horn Book Award) we have all the required elements for a first-class adventure, two boys, two shovels, a dog and dirt.  Sam & Dave Dig A Hole (Candlewick Press, October 14, 2014) is a story you simply can't read only once.  It's a true head-shaker and a major rule-breaker.

On Monday Sam and Dave dug a hole.

Digging a hole, in and of itself, is only as important as the reason why the digging is being done.  According to Dave, in reply to Sam's question of when they will stop, they are going to dig until they find

As they dig first waist deep, then twice as tall as their heights, their dog goes along with them.

He knows, like we do, they have already passed by a gem of extremely large proportions.  It's to the reader's right of the current hole.  Not having found anything, Sam and Dave keep on shoveling creating a tunnel deeper and deeper. With a page turn we get excited.

They are on a direct path toward a colossal discovery.  Within inches of this amazing find, they decide to take a break.  Instead of focusing on their dog's nose pointing downward, they savor a snack of chocolate milk and animal cookies.  As they are resting Dave proposes digging to the right.  Sam readily agrees.

Again they pause, not noticing the efforts of their puppy pal behind them.  Dave has a further proposition.  Sam's not too sure, but they decide to split up going in opposite directions.  It's obvious they should have stayed the course.

Eventually meeting at the previous level, they decide to follow their original plan, going down, farther and farther.  If they had x-ray vision perhaps they would not have made this choice.  The word gargantuan comes to mind.

The last of their provisions have been shared.  These two explorers are filthy and tired but they keep digging until they can dig no more.  As they fall sound asleep, their canine companion keeps digging having smelled true doggy treasure, a bone.  His efforts succeed in more ways than one where their attempts failed.  Is this the


Combining the barest of narration with conversation between Sam and Dave readers are taken on a journey of astonishing surprises.  The story line of Mac Barnett is the most marvelous of maps leading readers to make their own conclusions.  The

We are not sure of the relationship between Sam and Dave except they share a grandfather.  Dave may be the one to pose changes but Sam supports him.  They are definitely a team comfortable with one another.  Here is a sample passage.

But they did not find anything spectacular.
"Maybe we should go back to digging
straight down," said Dave.
page turn
"Yes," said Sam.
"That is a good idea."

The matching dust jacket and book case are nearly identical images.  On the back in place of the text, Sam, Dave and the dog, we have only the ISBN at the bottom of the hole.  The endpapers pick up the color found in the fruit on the single tree in the yard at the beginning and ending of the story.   The title page image starts the narrative visually as Sam, Dave and the dog walk away from a house toward the tree.  The final page with text (but not the conclusion of the story by any means) is a reverse image in that Sam and Dave are much dirtier, still carrying their shovels, but they are walking toward a house.

The creamy background on a heavier matte-finished paper supplies the needed texture for Jon Klassen's pictures rendered digitally and with colored pencils.  For the most part an illustration appears on a single page with the supporting text on the opposite page.  It's the eyes on his characters, especially the dog, which add an extra layer to the narrative.  No detail is missed; most markedly as to the enigma at the end, even extending it to the jacket flaps.

By having the dog be the silent member of the team (Dave acknowledges him in an earlier illustration with a hand gesture), we can also count him as a partner with us.  He knows because of his nose what we are able to see with the cut-away nature of Klassen's visuals.  His body movements and glances toward the monetary hidden riches, the boys and us, supply a huge dose of humor.

One of my favorite illustrations is when the two boys get dirtier, more tired and hungry and their surroundings are getting darker.  The dog already senses the bone deep below them.  We can see it too.  This bone and the dog's pursuit of his something spectacular change everything.


As I have read Sam & Dave Dig A Hole written by Mac Barnett with illustrations by Jon Klassen, over and over and over, one thought persists.  They must have had a great time creating this book.  The results of the dog's persistence will have readers thinking and guessing for decades.  I am glad this title found a place on our Mock Caldecott list.

To gather more information about either Mac Barnett or Jon Klassen please visit their websites (or Tumblr) by following the links embedded in their names.  Here is a link to a Calling Caldecott post by Martha Parravano.  Be sure to read Cynsations Author & Illustrator Chat & Giveaway: Mac Barnett & Jon Klassen on Sam and Dave Dig A Hole.  After you've read this title you should probably stop by teacher librarian and blogger Travis Jonker's blog 100 Scope Notes to read 6 Theories on the Ending of Sam & Dave Dig a Hole.  John Schumacher, teacher librarian and blogger at Watch. Connect. Read. recently hosted a visit by Mac Barnett and Jon Klassen at his school library.  His author illustrator days are the stuff of legend.