It's like living inside a snow globe someone is constantly shaking.  The landscape is laden with more than a foot of white fluff.  Soon the winds will begin to howl rattling the windows and singing down the chimney. 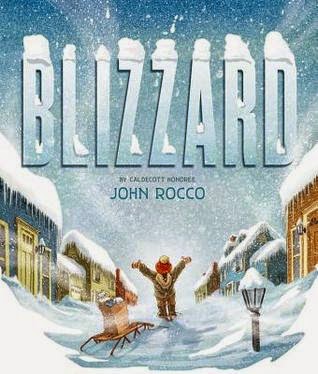 When the National Weather Service issues a gale and winter storm warning together, it's time to expect the unexpected especially when Thanksgiving is ten days away.  Back in February 1978 no one was prepared for the severity of the storm; no one was sure the meteorologists were correct.  Caldecott Honor winning author illustrator John Rocco (Blackout, Disney Hyperion, May 2011) writes and illustrates his version, Blizzard (Disney Hyperion) with all the childlike awe this spectacular event deserves.

One day, when I was a young boy,
nearly four feet of snow fell from the sky.

On a Monday morning when school was in session the flakes began falling.  When they were dismissed early; they were accumulating, getting deeper and deeper.  Even as bedtime approached, the snow kept coming down.

Leaving the house by the door was not an option the next morning.  Moving through the snow was nearly impossible.  Thankfully a working woodstove and hot chocolate warmed up John, his older sister, Mom and Dad.

For the next few days endless shoveling and digging in the snow were on the agenda.  By Thursday no snow plows had been through the neighborhood yet.  Having enough food was becoming a concern.

For a boy who had faithfully read the Arctic Survival guide, there was only one thing to do.  On Saturday, with a list and creative ingenuity on his feet he left the house.  Many stops in the neighborhood were made, delaying his arrival at the local market.

With his goal accomplished, getting home before dark was necessary.  Many stops in the neighborhood were made, making his arrival home all the more welcome.  In 1978 memories were made.  In 2014 we lucky readers get to read a book recreating those meaningful moments and the incredible efforts of one ten-year-old boy.

It's like John Rocco has turned back the clock several decades, allowing his younger self to tell the story.  His sentences highlight those exact things which would capture the attention of a ten-year-old.  The revelation of a series of personal events by using specific word descriptions gives readers a sense of being side by side with John.  Here are a couple of examples.

We laughed as we sank deep in the frozen powder.
But walking was hard---
it was like trying to move through white quicksand.

We made camp by the woodstove,
and our feet tingled as we sipped
hot cocoa made with milk.

How can you look at the front of the dust jacket and not smile?  The ten-year-old boy with outstretched arms standing in his windswept snowy neighborhood is feeling downright joyful.  On the back of the dust jacket a picture taken from the book's interior of him, his dog and sister struggling unsuccessfully in the snow gives readers a precise idea of its depth.  Underneath the book case a bird's eye view of the rows of houses, buried beneath the storm's drifts as flakes swirl around, leaves no doubt as to the extent of the blizzard.  The opening endpapers are in a pale steely blue with heavy snow falling into piles.  Nothing but pure white covers the closing endpapers except for a path of telltale prints extending from one corner to the top of the next page.

I burst out laughing at the page before the double title page spread.  Using a single page John Rocco has a series of six pictures of himself holding a measuring stick.  In each one the snow gets higher and higher until all you can see is the boy's hand at the top of the stick and the top of his ski hat with the white pom-pom. Breathtaking would be a word to define the title page.  Again it's as if we are looking from above through a break in the storm clouds at the neighborhood below before the snow begins to fall.

Rendered in pencil, watercolor, and digital painting the illustrations vary in size according to the amount of white space framing each.  Several span from edge to edge on a single page or across two pages.  Rocco has cleverly inserted the name of each day into the images; as part of the message on the blackboard in the classroom, squirrel tracks over a snow-covered roof, snow-covered branches on a tree, or raisins spilled across the floor from a snack box. His four-page fold-out of the boy's trip to the neighborhood market is wonderful.  The labels of all the stops made couldn't be more perfect.

Two of my many favorite illustrations follow one another.  The first is the scene from the boy's bedroom as he gazes out the window at the falling snow on Monday night.  The Arctic Survival book in tented to a remembered spot on his bed, his penguin lamp glowing.  On the wall hangs an Everest poster.  Lying next to the bed is his dog.  Outside a street light illuminates the Stop sign.  About a foot of the post is uncovered.  On the next page all readers see is blue, lots of falling snow and the Stop sign, now partially covered in snow.

Blizzard written and illustrated by John Rocco marvelously documents seven days during the blizzard of 1978 as seen and experienced by a ten-year-old boy.  It is said you should write about what you know.  John Rocco does it brilliantly in text and illustrations working together in seamless harmony.  This title is on our Mock Caldecott list.

To learn more about John Rocco, his books and illustrations please visit his website by following the link embedded in his name.  Follow this link to a recent review by author and blogger Julie Danielson at Seven Impossible Things Before Breakfast. (My two favorite pages are featured.) This links to a post at Kid Lit Frenzy as part of the blog tour for Blizzard. Several days remain on the tour.