Late in the evening when Xena is lying across my feet gently snoring, I wish the one last thing I have to do is done.  The ease in which she relaxes usually eludes me.  When we are outside she can sit in the yard for hours sniffing the air and watching the people and birds move back and forth.  This is a lesson I need to learn from her; to enjoy those moments instead of mentally going over a to-do list in my mind. 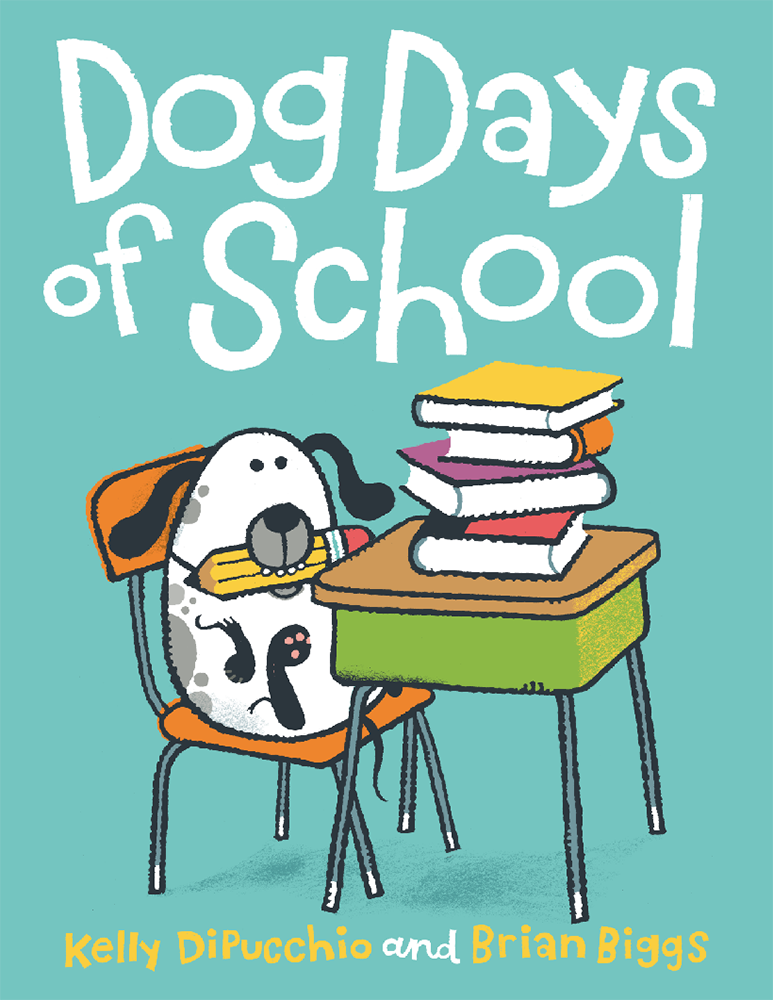 I don't believe I have ever thought about trading places with Xena but I sometimes stop in the middle of whatever I am doing to sit or lie down next to her.  Charlie has a dog too.  His name is Norman.  Dog Days Of School (Disney Hyperion Books) written by Kelly DiPucchio with illustrations by Brian Biggs is their story.

There is not one single thing he likes about it.  As each Sunday draws to a close he gets very anxious about attending class on Monday.  One night, seeing Norman curled up sleeping on his doggy bed, Charlie, looking outside his window at the starry sky, wishes he could be a dog.

Guess what?!  On Monday morning Charlie is Norman and Norman is Charlie.  As if nothing is out of the ordinary, Charlie's mom wakes up Norman reminding him to get ready for school.

Norman eats Charlie's breakfast, brushes his teeth and grabs his lunch running out the door (on all fours) to catch the school bus.  Charlie, on the other hand, gets cozy on Norman's bed for a nap.  Although Norman gets some questioning looks from the students, he does what they do.  Later in the day Charlie climbs up on the couch, watching the leaves drift down from the trees...for a very long time.

On Tuesday, Wednesday and Thursday Charlie and Norman gladly participate in each other's numerous normal daily activities.  By Friday, though, trouble is brewing on the horizon; Norman decides to chew his pencil, the table and the teacher's shoes and Charlie is not at all happy about spending hours at the groomers. Saturday is a disaster for them both.  When Sunday night rolls around, Charlie is desperate to be himself again.  His frantic behavior lands him outside in the dog house.  What will Monday morning bring for this boy and his steadfast canine pal?


Author Kelly DiPucchio establishes a rhythm in her writing.  To begin she makes a statement supported by several sentences which repeat words for emphasis.  Then throughout the story there is a back and forth exchange of three thoughts followed by a single idea.  DiPucchio uses pacing and significant pauses to great effect; eliciting laughter from readers.


As is my habit I opened and removed the dust jacket from the book case.  They are different but my lips are sealed.  The color palette seen on the front of the dust jacket is consistently used in the remainder of the book's visuals.  What you can't see is the back of the dust jacket.  Charlie is blissfully asleep on Norman's bed, dog bone solidly gripped in his teeth.  Above him the single sentence reads:

did
The dog ate my homework.

Brian Biggs use of a heavier black line around the elements in his pictures accentuates the details. On his single page illustrations he brings readers closer to the characters, then giving a wider perspective on the double-page spreads.  With simple lines and dots for his facial expressions, he conveys an array of emotions.

True hilarity is depicted in his interpretation and enhancement of the text.  When Norman goes to school and makes a clay sculpture, it's not a mound like a typical younger student.  It's an exact replica of a fire hydrant.  When Charlie goes on a field trip just like Norman, he ends up at the dog park (on all fours), surrounded by five dogs ready for a game of fetch the Frisbee.

I like so many of these pictures; it's hard to pick a favorite.  Two I really enjoyed are the night scenes; Charlie and Norman in his bedroom at night with the play of light on his face and bed and Charlie outside in the dog house.  The shadows of the tree on the fence and yard is atmospheric in a comforting way as again the light from the moon (street light?) is highlighting Charlie's face.


If you are seeking a light-hearted take on being careful for what you wish, being grateful for the everyday and a guaranteed giggle fest Dog Days of School written by Kelly DiPucchio with illustrations by Brian Biggs is, in the words of Xena, wooferlicious!  The team of DiPucchio and Biggs has created an upbeat read aloud to be enjoyed one on one or with an entire group.  School is really not so bad, especially if you're not a dog.

To learn more about Kelly DiPucchio and Brian Biggs follow the links embedded in their names to access their websites.  Brian Biggs posts lots of artwork about the process for this title.
Posted by Xena's Mom at 8:22 PM