If you've ever been around little guys and gals learning to talk you know various parts of speech are frequently missing from their phrases and sentences.  Their triumphant grins when a person, a place, a thing or an idea are properly expressed are so uplifting, it wouldn't be right to point out the missing words.  It's the same for persons of any age who are attempting to learn a second language; go with the basics first. 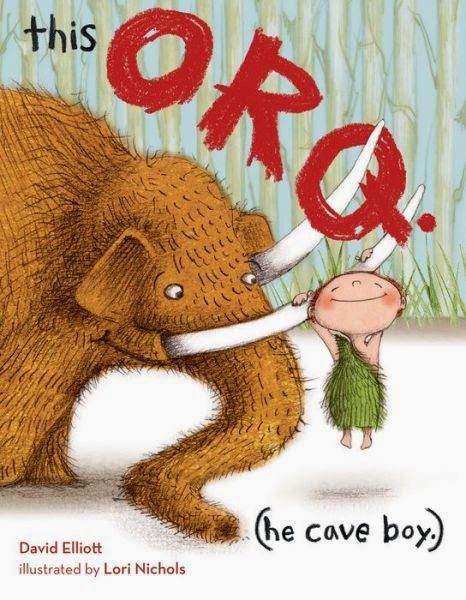 Let's step back in time, way back in time, to a portion of the Stone Age.  Let's imagine a story about a boy and his pet...woolly mammoth.  (You're smiling already, aren't you?) this ORQ. (he cave boy.) (Boyds Mills Press, an imprint of Highlights) written by David Elliott with illustrations by Lori Nichols proves that some things rarely change over the course of tens of thousands of years.  Some things remain the same.

This Orq.
He live in cave.
He carry club.
He cave boy.

Orq has adopted a baby woolly mammoth.  He has named him Woma.  The two are inseparable.

Problems begin to arise when Woma starts to grow in size.  To complicate the situation Orq's mom does not like certain physical characteristics and habits of the woolly mammoth.  He, like some other pets, leaves hairy messes, is rather whiffy and deposits piles of poo inside the rocky residence.

Woma is banished from the cave but Orq's abundant affection for his friend helps him come up with a surefire plan.  He is going to teach him to do three things guaranteed to have his mother loving the woolly mammoth as much as he does.  Oops!  Oh! No! Yikes!  Woma is still not setting one furry foot in the cave.


David Elliott's word choices for this story are splendid.  The spare text conveys his understanding of what his intended audience needs to know.  His repeated use of

is the key to binding pieces of the narrative together and of endearing readers to his characters.  It also acts, with alterations, to define the feelings of Woma and Orq's mom at pivotal points.


When you first hold this book in your hands the tactile experience starts with the matte-finished dust jacket and book case.  Unfolding the two you see Woma stretched out, eyes alight with attention, gently holding a truly contented Orq on one tusk.  Squawking away are the three baby bird characters around the ISBN in the lower left back corner.  The matching opening and closing endpapers showcase Orq's boyhood toys, artistic tools and found treasures; a bird feather, a stony bear, woolly mammoth and sabertooth tiger, assorted writing utensils and a tricycle.  The first two double-page spreads, the title page, verso and beginning text, introduce Orq and his surroundings along with the whimsical mother bird, blue with darker stripes and a bushy red top.

Lori Nichols' illustrations rendered in #4 pencil on Strathmore drawing paper and colorized digitally elevate the humor and love in this story with her extra detailed touches.  Each time the word love is used the color of the text reflects the character.  Three roughly drawn red hearts ascend from the head of the person showing their devotion.

To visualize Woma growing bigger and bigger and bigger he has been placed next to a tree. Along with his growth is the making of bird nest, the babies with open beaks and mama bird, arms on hips in disgust when the hole in the tree is covered.  That final illustration of these three is one of my favorites.  Orq loving Woma, hugging his trunk, both their eyes closed, and completely oblivious of the mama bird's dilemma, is funny and touching.


This book, this ORQ. (he cave boy.), written by David Elliott with illustrations by Lori Nichols begs to be read aloud.  Listeners will be chiming in with the refrain immediately.  I'd be willing to bet you will have plenty of boys and girls speaking Orq for many days later.  Readers of any age will readily identify with the love between a pet and their human.  A huge plus goes to Elliott and Nichols for the pictured two word twist at the end.  I am grinning ear to ear after discovering there is to be a sequel to this title.

For more information about David Elliott and Lori Nichols please follow the links to their websites embedded in their names.  If you follow this link you will be taken to an interview of Lori Nichols at KidLit411.  UPDATE:  Here is a link to a story hour kit by Curious City DPW.