A City, A Cape And Courage

We usually associate certain places with specific people and memorable events.  Growing up in a small community outside a state capital, despite growth and new construction, those connections remain strong for me decades later.  What is strange and a little disconcerting is to see people who have lived in one place for as long as you can remember, happily residing in an entirely different environment. 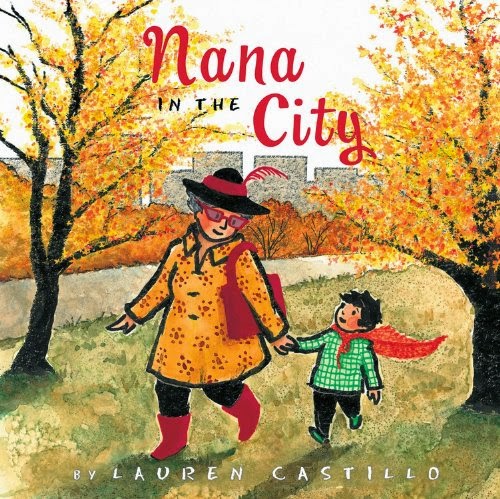 If we enjoy the relative quiet of the countryside, it's an adjustment to become accustomed to the hustle and bustle of a large city.  Nana In The City (Clarion Books, an imprint of Houghton Mifflin Harcourt Publishing Company, September 2, 2014) written and illustrated by Lauren Castillo is about a first visit to the city for a little boy.  What's even more unbelievable to him is that his nana is living here now.

I went to stay with Nana at her new apartment in the city.

After a subway ride and walking down the streets surrounded by tall buildings, the boy is certain this cannot possibly be a good home for his nana.  Regardless of her assurances, he struggles with sleep his first night there.  When he finally drifts off, Nana begins working on her special gift.

Waking up in the morning, Nana presents the boy with a snazzy knitted red cape tying it on over his pajamas.  Later wearing it on their stroll, his perspective of the city is transformed.  In the activity, noise and frightening stuff, he sees people enjoying their favorite things in the park, playing and dancing to music and an act of kindness erases fear.  Is there magic in the cape?  Of course there is!  The best magic of all...love freely given and received.


The text, like the cape worn by the grandson, wraps itself around the reader casting a spell of warmth and inspiring courage.  Lauren Castillo uses what I like to call the timeless storytelling technique of three; guiding readers into a story, reinforcing their connection and releasing them with something new and wonderful.  Busy, loud and scary are noticed by the grandson immediately as he tells his tale.  Nana changes those three words to reflect her appreciation of the city; looking for the positive.  The gift of the cape gives the boy the courage necessary to see his surroundings with the same eyes as his grandmother.


A glowing color palette (look at all the gold, orange and red) on the matching dust jacket and book case is a visible sign of the affection filling this book.  On the back Lauren Castillo has a circular image of the boy running, cape flying behind him, as his nana follows.  The color from the boy's jacket and shoes provides a solid background on the opening and closing endpapers.  Nana's two cats bookend a special ball of yarn on the title page.  A glorious image of the bridge, river and city spans across the verso and dedication pages.

Rendered in watercolor Castillo, whether the illustration extends edge to edge on two pages, a single page or as a circular image on a single page, masterfully uses white space either as a separate element or to frame others.  The characters of Nana and her grandson are utterly charming in their features, body movements, clothing and accessories (Nana has green reading glasses but red sunglasses).  Heavier black lines draw our attention to what Lauren Castillo wants us to notice.  There is a softness to her pictures placed on the matte-finished paper.

One of my favorite two-page illustrations (I have many) is of Nana and her grandson at the kitchen table in the evening.  One cat (white) is resting on the windowsill with the darkened city in the background; the other (black) is playing with a ball of yarn on the table.  Nana is pouring milk into a red cup from a red pitcher for herself as the boy holds his red cup between his hands.  A plate of cookies is between them.  Xena's favorite illustration is of the boy and Nana on a city street, stopping to pet one of five dogs being walked.


Nana In The City written and illustrated by Lauren Castillo is in a word...marvelous.  It could be a cozy one-on-one bedtime story or as a read aloud to a group sparking conversations about grandparents and being brave.  I'm pretty sure every single reader has a special article of clothing they feel is magical.  I can already hear the stories being exchanged.  Be sure to share this as often as possible.  It's a classic gem.

For more information about Lauren Castillo and her work please follow the link embedded in her name to access her website.  This link takes you to a recent interview at Publishers Weekly.  There are numerous illustrations for this title and The Troublemaker at a Seven Impossible Things Before Breakfast blog post by Julie Danielson.  Teacher librarian extraordinaire, John Schumacher, interviews Lauren Castillo at Watch. Connect. Read.


Enjoy the extra artwork Lauren Castillo shared with her followers on Twitter.


NANA's coming to a bookstore near you in 11 days! Here's an early Times Square color study on the desk #nanainthecity pic.twitter.com/af6XnlTDoI
— Lauren Castillo (@studiocastillo) August 22, 2014


Just 13 days till NANA IN THE CITY pubs! Here's one of the interior paintings on the drawing table last fall @HMHKids pic.twitter.com/kUsStiyt5k
— Lauren Castillo (@studiocastillo) August 20, 2014


This hip Nana will be hanging out in bookstores in exactly 4 weeks! #NanaintheCity @HMHKids http://t.co/XlLbcx4pTH pic.twitter.com/gnYqlu0q5f
— Lauren Castillo (@studiocastillo) August 5, 2014