Show me a child who wants a baby-sitter to take care of them and I'll show you someone who is too young to know the difference.  Once boys and girls reach a certain age they are sure, beyond a shadow of a doubt, they are perfectly capable of handling any situation which might arise.  Parents, on the other hand, really never stop thinking you need adult supervision (insert their supervision) no matter how old you get. 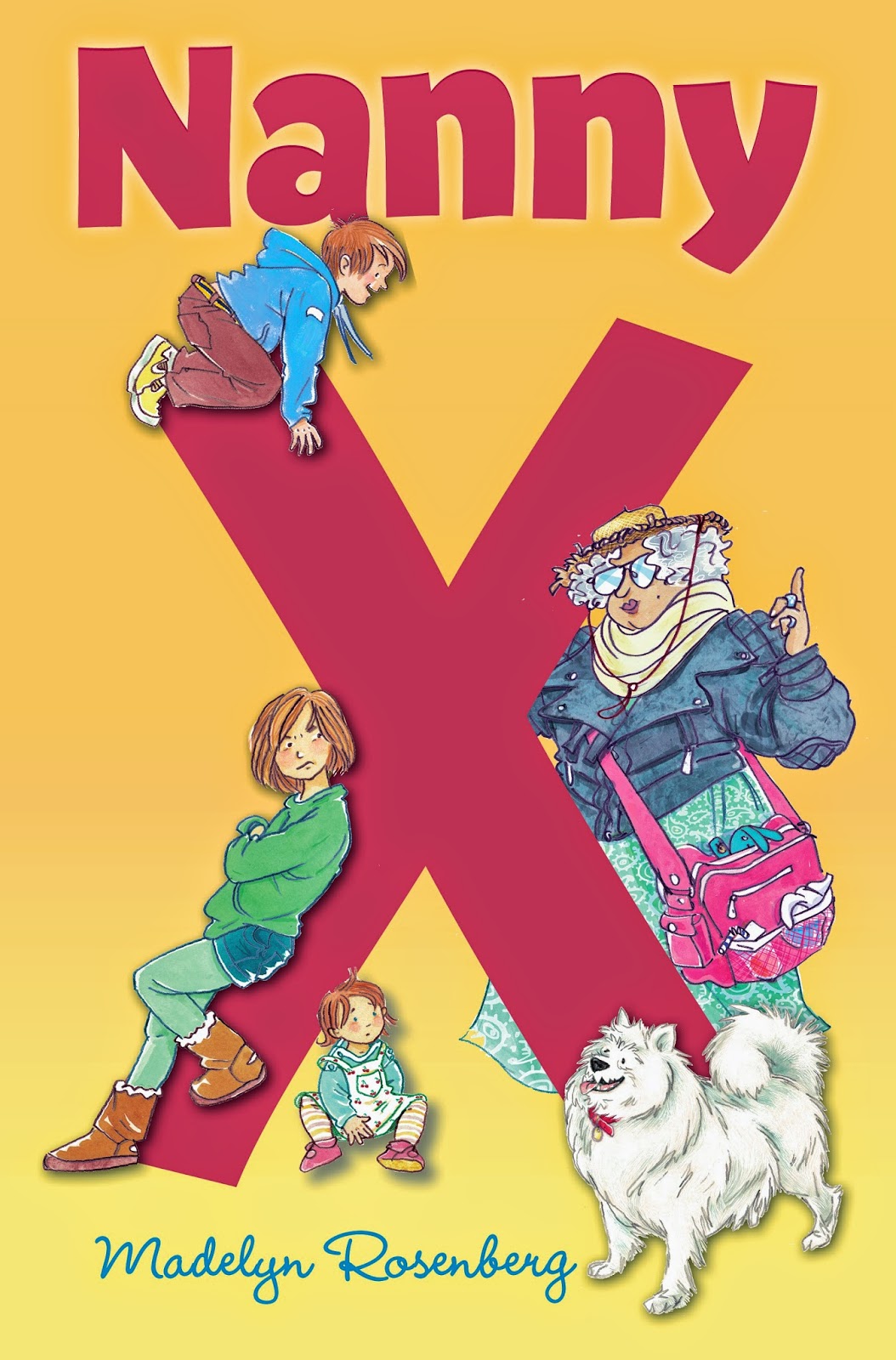 Three children, Alison, Jake and Eliza, ages ten, eight and under two, plus one dog named Yeti are about to get the surprise of their very young lives.  The children's mother has taken a new job as an attorney for the law firm of Mathers and Mathers.  Their dad works at the Museum of Natural History.  Nanny X (Holiday House) written by Madelyn Rosenberg introduces the trio (and us) to a pretty peculiar person hired by their parents.

This someone is none other than the new nanny.  She certainly makes a lasting first impression with every member of the family.

What she had was a woman with silver-gray hair, a straw gardening hat with pink flowers, and no smile.  She wore a black motorcycle jacket and a pair of mirrored sunglasses.  She smelled like a combination of chicken soup and motor oil, and it looked like she had borrowed her shoes from a Pilgrim.

Looking the children over from head to toe, she gives a nod and a soft exclamation of approval.  This dear readers is no ordinary nanny.

She knows tiny details about the family no one should know but them.  It's not like she's got eyes in the back of her head; it's as if she has eyes and ears everywhere.  Her lunch packing skills leave much to be desired; anchovies with peanut butter?

Surprisingly enough she meets Alison and Jake at the bus stop after school, pushing Eliza in a stroller with Yeti eager for a walk.  More noteworthy than this, she suggest they hurry to a public hearing on whether to keep Rawlings Park for the youth of the city or build a huge factory on the land.  Alison and Jake had been talking about this with their friend Stinky on the bus just moments ago.

At the rally when the mayor receives a blow to the head with Stinky wrongly accused, the plot and coconut smoothies thicken.  Nanny X and another member of N. A. P. (I will not disclose what this means) along with her new charges seek clues to the identity of the real criminal.  Nefarious minds are at work with big money to be made.

Readers will be turning pages faster and faster as the action moves from person to person, place to place.  There might be a children's book that moos so loud the walls shake.  There might be a GPS bib for tracking the good and definitely not so good people.  With Nanny X and her diaper bag the only thing you can be sure of is every day will be an adventure.


Madelyn Rosenberg uses the technique of Alison and Jake speaking in alternating chapters in this just over one hundred page book.  Through their perspectives the links of the narrative are tied together seamlessly.  Rosenberg has a completely realistic handle on the language and thought processes of sisters and brothers at these ages.  She has her characters tell it like it is which provides for laugh-out-loud moments.  (I've read some portions three times and I still laugh.)  Here is a sample of a Jake and Alison chapter connecting.

Her lips moved, like she was asking the diaper if it was having a nice day.  If Nanny X expected that diaper to talk back to her, then Ali and I had a bigger problem than the mayor turning our park into a factory.

Something told me that even in New York, nobody talked to diapers.  Maybe Nanny X was just smelling the diaper to make sure it was clean.  And her lips were moving because...that helped her smell better?  But I heard her voice.

Here's part of the conversation between the Chief of Police and Stinky when he is arrested.

"I didn't throw that," Stinky said.  "I was just holding it.  You found it in my hand."
"Where there's smoke, there's fire," the chief said.  "Get me a stick.  I want to roast a hot dog."
"But it's true," Stinky said.  "I picked it up because I thought it might be a geode."
"Throwing rocks at the mayor is a criminal offense," said the chief.  "You have the right to remain silent, and we have the right to take you to the police station."
"My mother is going to kill me," said Stinky Malloy.
"You see," said the chief.  "Even his mother thinks he's guilty."


Nanny X written by Madelyn Rosenberg is, in a word, hilarious.  If all nannies were like her, every child would be in line to have one in their home not just for one but every single day of the year.  Guys and gals are going to gobble this up like dessert and ask for seconds.  I certainly hope there are more Nanny X escapades in the works.

You are going to want to visit Madelyn Rosenberg's website to read posts about her process for this title and the book trailer shown below.  Please follow the link embedded in her name.  Nanny X is set for a September 15, 2014 release.