Looking like a scene out of Alfred Hitchcock's The Birds my backyard and the air above was populated by hundreds and hundreds of blackbirds this morning, feasting on whatever they could find in the lawn and taking flight, heading in a southerly direction.  For more than a week leaves have been turning yellow and falling from the ash trees still remaining on my property.  Despite the flickering, booming thunderstorm passing through earlier, the high humidity day after day, the constant breezes and the official date of the autumnal equinox weeks away, a change is coming.  Something new is on the horizon. 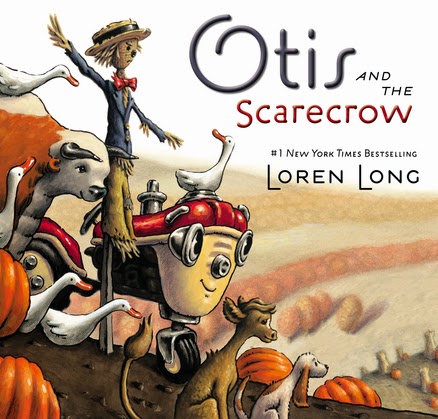 A beloved character in children's literature is returning in a new story.  If you listen closely you can hear him moving about the farm,

Otis and the Scarecrow (Philomel Books, an imprint of Penguin Group (USA), August 28, 2014) written and illustrated by Loren Long brings back our fearless friend; the steadfast red tractor, pure of heart, instinctively doing the right thing.

The farmer first brought the scarecrow to the farm, where the friendly little tractor named Otis lived, back in the summer, when the corn was tall and ripe.

Otis, being Otis, immediately goes to investigate this newest member of the farm family.  To his dismay his good cheer and warmth are returned with a stony, silent look.  Each of the other animals, the horse, ducks, little calf, puppy and the bull, are similarly treated.  All walk away wondering about this scarecrow standing alone, grimly overlooking the cornfield.

As fall edges its way into the end of summer days, the crows gather courage mistreating the sentinel.  He says nothing.  He does nothing.   Days pass with the farm changing; corn shocks lining the rows and bright patches of orange where the pumpkins rest.

For Otis and his friends this season ups their energy level; their game playing is wild and fun.  When the tired tractor leads the crew up the hill to the apple tree, there is still one game to be played, the quiet game.  Otis gives his well-known signature trio of sounds signaling the start.  (These are new and well suited to our treasured tractor.)

With one thing leading to another, pretty soon everyone is laughing like crazy except for Otis, still and smiling.  It does not escape his attention there is another standing still but not smiling.  On another day, a chilly downpour forces the country companions to seek shelter beneath their favorite tree.

Gazing at the rural vista Otis again takes notice.  Still gathered under their leafy umbrella the animals watch as their plucky pal

goes down toward another.  Out in the open during the continued cloudburst they cluster around Otis.  The signals are given.  There is a new winner this day.


Having read the four previous books about Otis and life on the farm, it was with a great deal of anticipation this fifth book was read and read again and read so many times I lost count.  Loren Long has in the character of Otis given readers a guardian of all that is good.  In their purest form Otis embodies bravery, compassion, loyalty and love.  He leads by example.

With each page turn we are transported deeper into Otis' world leaving ours behind.  We get a true sense of each character's personalities through expressive verb and adjective choices.  Long feels the pulse of a farm's heartbeat sharing it with his readers; his skill in portraying a pastoral setting is flawless.  Here are two examples taken from this book.

The bull would twitch his nose, which made the little calf giggle.  This made the bull chuckle with a snort.  The bull's snort would amuse the ducks, and their bottoms would wiggle as they held back their giggles.

There was the overflowing Mud Pond.  There were the shiny wet pumpkins and the soaked corn shocks all in a row.  And swaying back and forth in the cold wind and rain was the scarecrow.


Beginning with what Loren Long describes as a monochromatic scene with shades of black transparent gouache paint he adds color delineating his characters, places on the farm, the season of the year and changes in the weather.  On the front of the dust jacket he portrays characters central to the other books as well as this story.  A tiny Otis is running toward the ISBN on the back beneath a circular image of the cranky scarecrow pestered by pecking crows as Otis watches in the distance.

The formal title page, a single illustration across two pages, showing a happy Otis, puppy and calf amid the rolling hills, with the farmer, his truck and the scarecrow behind them to the left, quickly transports us with a sense of serenity.  It's like we are coming home to what we know and love.  All the pictures, single and double page, are outlined with fine black brush strokes.

Long's backgrounds are white highlighting his setting and characters with the exception of the rain day.  His use of grays clearly depicts the cold, wet and emotion of being alone.  The final page illuminates the change beautifully.

While all these illustrations are well worth framing two of my favorites are of the animals gathering to play the quiet game.  In the first Loren Long gives us a closer perspective, focusing on the faces around Otis.  In the second he zooms out showing the animals full bodies frolicking in joy despite losing the game.  Otis watches them affectionately.


No action is as selfless as that which has no chance of response. Nevertheless in Otis and the Scarecrow written and illustrated by Loren Long, this tractor, doer of noble deeds, goes ahead.  Readers will understand how kindness can be extended without expectation, how others will notice this kindness, responding in kind and everyone...yes...everyone is the richer for the experience.  Share this title as much as you can.  It's a classic charmer.

For more information about Loren Long and his books as well as additional activities and videos please follow the link embedded in his name to access his personal website and the link embedded in the title to reach the Otis The Tractor web pages.  Here are the links to my reviews of Otis and the Tornado, Otis and the Puppy and An Otis Christmas.  I am including this video Loren Long made for his first book, Otis.


"When the frost is on the punkin and the fodder's in the shock." That line from James Whitcomb Riley's poem inspired Otis and the Scarecrow.
— Loren Long (@lorenlong) September 7, 2014