When you live in an area with lakes carved out by glaciers, it's a given the contents of the shore line will extend into the surrounding land no matter how many decades have passed since development by humans began.  Barely an inch beneath the lawn on my property is nothing but gravel and sand.  My gardens flourish because I have dug out the original soil replacing it with bags and bags and bags of organic dirt and peat. 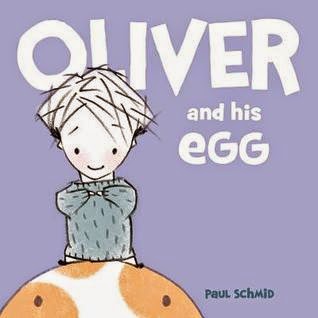 During this summer's months men from the city (our township electricity is supplied by the city) have been digging up lawns replacing electrical lines with newer versions.  They have unearthed geological treasures of all shapes and sizes.  Day after day when walking Xena, a particular rock on the shoulder of the road has caught my eye.

After reading Oliver and His Egg (Disney Hyperion Books) written and illustrated by Paul Schmid, I decided to go back and claim it as my own.  It fits in my hand, nearly perfectly round and warmed by the sun.  Like Oliver I can't stop thinking.

When Oliver found his egg...


In his mind's eye, Oliver sees his egg cracking open.  This is no ordinary egg.  Popping from the two halves is a spotted creature meant to be his friend.

Together they share journeys; traveling to parts unknown.  Like the Vikings of old an island is discovered.  Floating in space wearing astronaut gear, the Earth a distance ball, Oliver and his companion hear a call.  It's Oliver's name being shouted by a little girl.

She understandably wants to know why Oliver is sitting on a... rock.  Holding the rock Oliver looks; his inventiveness shifting.  For a little guy he has big, big ideas.


Spare text, only fifty-two words thoughtfully selected and placed, a few on a page, asks readers to slow down and think along with Oliver.  Paul Schmid wants us reflect about the role of imagination in directing our actions.  He wants us to ponder our place with people realizing even the slightest change in our thoughts can make a difference benefiting us and others.

When opening the dust jacket the lavender background spreads across the left and right sides.  Oliver is sitting on the head of his friend whose tail curls around to the back.  Placed on top of the tail is his rock.  The peach from the jacket covers the book case with loosely but easily identified dinosaurs sketched in a lighter shade.  White eggs on teal decorate both the opening and closing endpapers.

With the first page turn Paul Schmid gives readers glimpses of events to come, showing Oliver, with other children on a playground, riding a bouncing dinosaur when he first spies his egg.  With those introductory five words Oliver's fantasy is pictured on a pale green background surrounded by a liberal amount of white space.  He is looking at a rock; his mind sees a cracked egg with a tiny dinosaur peeking out.

As dreams of their adventures together expand so does the size of the hue of green and the imaginary friend.  To accentuate Oliver's joyful turn of thinking Schmid designs a four page fold-out sure to illicit exclamations.  With a pastel palette and simple lines on characters' faces denoting emotion, Schmid endears readers to his story.

One of my favorite illustrations is when Oliver and his polka-dotted dinosaur are on the island.  Oliver has removed his Viking helmet placing it on the beach.  He is holding a stick roasting two marshmallows over a crackling fire as his friend, resting, closely watches.


I simply can't look at the cover of Oliver and His Egg written and illustrated by Paul Schmid without smiling.  Oliver, his dinosaur and his other playmates are adorable with a capital A.  Schmid's mastery of words opening the narrative door for a higher illustrative impact strikes a chord in his readers' collective hearts.  Huge hugs to Oliver in his latest title.

For more information on Paul Schmid and his work please follow the link embedded in his name to access his website.  Here is a link to my review of Oliver and His Alligator.  In May of this year teacher librarian wonder, John Schumacher, interviewed Paul Schmid on his blog Watch. Connect. Read. Paul Schmid has a board on Pinterest for his books.
Posted by Xena's Mom at 9:49 PM