It's hard not to think about what-ifs sometimes.  What if I was not on social media?  What if I was not a friend with a particular person?  What if I had not checked posts on a specific day?  The facts are I am on social media, friends with a special author and I did read my feed on August 10, 2014.  Based on three sentences written and shared, I went to my bookshelves remembering a title I had purchased.  As soon as I opened the book, my known world slipped away. 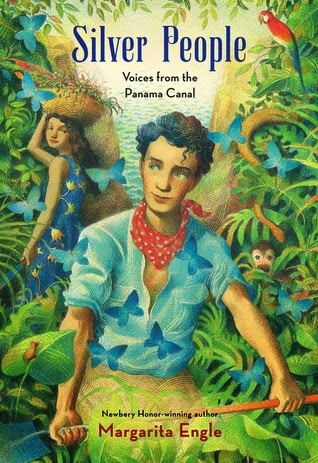 Newbery Honor winning author, Margarita Engle presents readers with a remarkable piece of historical fiction in one of her 2014 titles.  Silver People: Voices from the Panama Canal (Houghton Mifflin Harcourt) spans the years 1906 to 1914 in the country of Panama.  The past is speaking to us and we need to listen.

MATEO from the island of Cuba
JOB HUNT
Fear is a fierce wind
that sends me reeling
down to the seashore,
where I beg for work,
any work at all,
any escape
to carry me far
from my father's
furious fists.

Fourteen years old, strong for his size, willing to tell a number of lies to leave, Mateo, believing the propaganda about working conditions and wages paid to diggers of the Panama Canal, finds himself on a steamship bound to that very place.  Plagued by hunger, the humiliation of segregation by skin color, travel by railroad flatcars and living in boxcars, he realizes he is trapped by a mistaken decision.  The only brightness shining in what is and will become a bleak existence is Anita, a local girl, a seller of native herbs and plants.

As Mateo moves tracks daily, deeper and deeper into the Serpent Cut, another voice is heard.  Henry, from the island of Jamaica is a digger.  Instead of twelve to a boxcar, eighty of his comrades live together in one room.  At lunch break each day he sees how the Americans eat in comfort under a tent, the medium-dark workers sit on the train tracks and he and other diggers must stand with no place to rest.

Pay days come; restless workers wander around in Silver Town made of mud, loneliness, anger and not much else.  Draw to a boxing ring by the ghosts of his past, Mateo find himself the loser in a fight with Henry.  The two now know one another.  They meet in the ring on a regular basis, strangers battling with fists for no apparent reason.

A landslide, an arrest, and a visit from President Roosevelt, define shifted loyalties.  The agony is lessened by another speaker, the voice of Augusto from the island of Puerto Rico, educated in the United States, working as a geologist on this mammoth endeavor.  Augusto sees Mateo's special gift, giving him at least one day a week to hope.

Official visitors, official changes, jungle living, the suffering brought by fever and freedom found alter all their lives.  Chapter after chapter we readers are drawn further into this huge undertaking filled with choices and consequences.  Nothing remains the same then or now; especially for us having read these pages.

As a novel in verse, Margarita Engle is able to create intimate portraits of Mateo, Anita, Henry, Augusto and even Old Maria.  Usually one or two pages long, their voices, thoughts, are realistic portrayals based upon her research.  We build in our minds an understanding of their physical and emotional statuses throughout the narrative.

Interspersed among their chapters are placed real persons, John Stevens, Theodore Roosevelt, George Goethals, Jackson Smith, Gertrude Becks and Harry Franck creating a more intense authenticity.  Margarita Engle sets aside pages, in eight different sections, for flora and fauna from the rain forest, the howler monkeys, glass frogs, a Blue Morpho butterfly, the trees and many others. They each reflect upon (or shout out) the impact of the Canal on their habitat. This technique of adding historical figures and allowing those with no voice to speak gives readers a more complete picture of all the aspects of the building of the Panama Canal during these eight years.

Very early in my reading of this book, I began marking passages until my copy soon had what I call the "porcupine look" from so many added sticky notes.  Here are a few of those many marked words.

Hunger at sea for three days
feels like a knife in the flesh---
twisted blade, rusty metal,
the piercing tip of a long
sharp-edged
dagger
called regret.  ...

...My hands feel like scorpion claws,
clamped on to a hard hard shovel all day,
then curled into fists at night.

At dawn, the steaming labor trains
deliver us by the thousands, down into
that snake pit where we dig
until my muscles feel
as weak as water
and my backbone
is like shattered glass. ...

THE TREES
WILDERNESS
We are fewer
than before,

but each of us
is just as alive
as ever,

our leaves
hungry for sunlight,
our roots thirsty
for rain,

our fruit and seeds carried far
by flying birds and roaming animals
so that young trees can spout and grow,
our shared forest once again spreading
like music.

Highly recommended for upper middle school on up, Silver People: Voices from the Panama Canal written by Margarita Engle is beautiful in its sadness, truth and hope.  Your understanding of the impact of this cut through a country on the place and people there, and those brought from afar, will be long remembered.  Margarita Engle gives depth and breadth to these events changing every reader.

To learn more about Margarita Engle please visit her website by following the link embedded in her name.  This link takes you to a recent interview at Watch. Connect. Read., a blog hosted by the talented teacher librarian, John Schumacher.  UPDATE:  Here is a link to an amazing guide at the Poetry for Children website.