Team Laughter For The Win

Rattling around in my memory banks are cries of Red Rover, Red Rover shouted out by opposing teams as other groups of children of all ages enjoyed their daily respite on the playground of my elementary school.  Every year, same time, same place, those same boys and girls could be seen in another area huddled around a hole carefully made in the dirt as a high stakes game of marbles was being played.  The swings, slide, monkey bars and teeter-totter were our obstacle course.  We invented whole new worlds in this area outside the walls of our building.  It was amazing and we loved every minute of it. 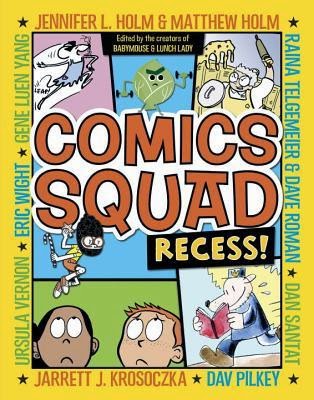 When the word went out over the virtual wire about collaboration between ten outstanding authors/illustrators, you could almost hear the humming buzz growing into a roar of anticipation.  Comics Squad: Recess! (Random House) combines the talents of Jennifer L. Holm, Matthew Holm, Jarrett J. Krosoczka, Raina Telgemeier, Dave Roman, Dan Santat, Dav Pilkey, Ursula Vernon, Eric Wight and Gene Luen Yang.  These short stories take readers into the wonderful realm of one of the best breaks during any given school day.

A company of three dons black T-shirt masks to commence their meeting of a secret club.  Given an impossible task of proving his worth, a fourth surprises everyone with his hard-earned new super-awesome ninja mindset and moves.  Gene Luen Yang's dialog between these eight-year-old guys is genuine to a fault.  Many readers will identify with Daryl cheering him on as he pursues his dream but laughing at how he accomplishes each discipline.


Dav Pilkey starts his story with a letter home to parents from a disgruntled first grade teacher.  (Trust me when I say I was chuckling by the second paragraph.)  It seems their son, George, has made a comic instead of completing a writing assignment as required.  The comic, Book 'Em Dog Man, follows a criminal cat as he attempts to rid the world of reading.  The spelling errors like

You Reeka!
airplain and
instinkts

make this truly hilarious and authentic.


The students may be at recess but Betty of Lunch Lady fame has her hands full in more ways than one when her partner is ill on the biggest lunch day of the week, Pizza Day.  In an attempt to feed the hungry hordes their favorite food on time, Betty creates problems of monstrous proportions. Super tools in hand she seeks to thwart her foe in the hallways with only five minutes to spare.  Betty's thoughts and spoken conversations will have readers nodding their heads and smiling, glad of another adventure by a beloved character from her creator, Jarrett J. Krosoczka.


Scratch calmly reading a book during recess is interrupted by his friend Squeak.  He has found, yet again, a magic acorn.  (Scratch enumerates his previous three hundred false finds.) As these two squirrel pals dash away into the woods and into a clearing, readers and Scratch will get an out-of-this-world shock.  Ursula Vernon provides the perfect platform for innocence is bliss versus being in the know.


Our fearless cupcake-loving heroine has placed herself in a pickle of historic happenings.  Jennifer L. Holm and Matthew Holm send Babymouse on a quest to enjoy recess like the other students in school.  It seems as if her imagination (or something else entirely) has other ideas as medieval meanderings and a zap to Zeus, to name a couple, attempt to foil her plans.  Readers will appreciate the narrative asides in rectangular boxes as well as the Friday finale fiasco.  TYPICAL


Get ready for a puns-tastic story in Eric Wight's tale of new student, Jiminy Sprinkles, a cupcake, in a classroom with a peanut, and other assorted fruits and vegetables.  It quickly starts at recess time when Jiminy asks the peanut if he can play with him.  He replies

I'm interested!  I'm just not used to having friends.  Everyone here thinks I'm a nut.

The Mean Green Gang try to trick the newbie and his pal but never fear peppermint is here.  Super Cool Man!


Not much could be funnier than three guys having a conversation about a three hundred word essay due right after recess when two of them have not even started.  To up the laughter factor the one dude is in a panic about not having even read the book.  (I can't tell you the title because I'm laughing too much. It's a sixty-four page classic.)  Add on the fact this was assigned three weeks ago and the dialogue is downright hysterical.  In a twist of fate (puke and a girl might be involved), Dan Santat delivers a stellar school story with humor at its finest.


It's raining outside; not a drizzle but pouring.  This equals doom for the students in Mr. Guff's class.  Their kickball tournament is cancelled and a fifth-grade monitor from Dullsville (my word not their word) is assigned to their room.  What the students don't know is Boring Becca has a few tricks up her sleeves.  Raina Telgemeier and Dave Roman know guys and gals and... gaming.  It shows on every page.


Edited by Jennifer L. Holm, Matthew Holm and Jarrett J. Krosoczka Comics Squad: Recess! is a rousing read.  Every single story, panels and text combined, is a success.  Babymouse and Lunch Lady act as narrative guides conversing on six separate pages before the stories start and at the end.  Four extra pages from the duo supply extra activities for readers.  Short biographical sketches of the authors/illustrators appear at the end.

Please follow the links embedded in the cartoonists' names above to access their websites.  For a peek at pages inside the book, follow this link to the publisher's website.  On the release date, July 8, 2014, John Schumacher, teacher librarian and blogger at Watch. Connect. Read. celebrated with an interview of Matthew Holm.  Jarrett J. Krosoczka stopped in at the Nerdy Book Club to chat about this title.  I don't know about you but there will be a stack of these at my house to hand out to trick or treat children this Halloween.