Have you ever had that feeling of total panic when two seconds have passed, you turn around and a child or a pet has vanished?  Heart racing you back track as quickly as you can, looking in all the possible places either might be.  Thankfully what seems like minutes is usually less than one, when they are found or reappear. 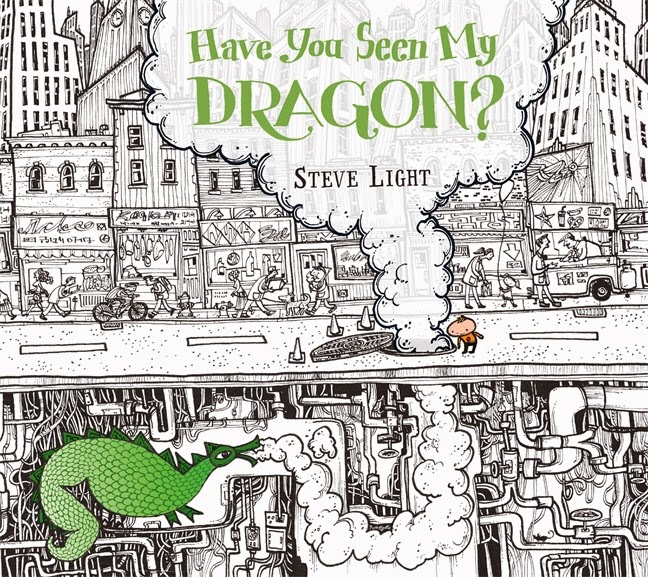 Granted, depending on where you are during this vanishing act or on the size of the beloved being, it may be easier to locate them.  Have You Seen My DRAGON? (Candlewick Press, April 8, 2014)) written and illustrated by Steve Light traces the path of a boy looking for his faithful (but wandering) friend.  Finding a dragon among the busy cityscape is much harder than you think.

Have you seen my dragon?
No? I will look for him.

Traveling to seek his pal, a young boy's first stop is a street vendor selling a favorite food.  He can't see his dragon but we can.  Lots of people travel to the city center on a bus but his dragon does not.

Let's go to the harbor to see if the dragon is riding the waves.  Is he thirsty enough to seek out the water towers on building tops?  Is he feeling playful enough to swing with the monkeys in the zoo?  He may be doing his good deed for the day.

Perhaps his fiery breath is causing problems above and below ground.  Or, best of all, he may be reading a book.  Let's take a look there, on the scaffolding of a painter or among the pigeons roosting up near the sky.

Is he ready for a cool treat?  Will the dog walkers or gathered children notice his presence? How is he moving through the streets?  How is he getting from place to place?  Where is the dragon?  Oh...there he is.


Steve Light addresses the fantastical thoughts held by many children (or children at heart) of having a dragon for a best friend.  He introduces readers to all the many opportunities and symbolic modes of travel, places to visit and structures found in a large city.  Clever readers will easily see which city this is even though there is no mention of a name.

As the boy looks for his adventuresome chum, each statement or question he poses to the reader is accompanied by a number from 1 (dragon) through 20 (lanterns) traveling from point to point.  We follow him because we can identify with his need to be reunited with the dragon.  We follow him because he is speaking directly to us; including us in his search. Here is a single passage.

I want ice cream!
Maybe my dragon wants some, too.


It's impossible to simply glance at the opened dust jacket of this book.  A single intricately detailed illustration extends from the back to the front.  Done entirely in black and white except for spots of color on the dragon and his boy, it invites closer consideration.  The book case is a solid spring green with black outline drawings of the boy with his dragon, different for the front and the back.  A map of the city, again in black and white, arrows drawn from each of the points to the next, are numbered in colored circles on the opening and closing endpapers.  The same colors appear on the pages within the book.

All of the pictures, rendered

in ink using a Mont Blanc 149 with a B nib that"flips" to a fine line,

are double-page spreads; one even requires the reader to turn the book to view it vertically.  The items being numbered are the only color on the pages.  Every visual is an exquisite exploration of a specific area in the city.

Even though the boy is unable to find his dragon in any of the pictures until the final one, we readers seek him out, finding him tucked into each of the scenes.  He is an active element in each of them.  He may be on the roof of the street vendor's cart ready to take the hot dog out of an unsuspecting customer's hand, posing as a fountain inside the monkey's cage, blowing smoke through the underground tunnels forcing it out a manhole cover or peeking around a tree with a ball in his mouth, ready to give it to a grateful dog.

Xena's favorite illustration is for the number 14-Dogs. With the city buildings and a bridge as a backdrop, dogs on and off leash are scampering through a park.  Squirrels are taunting them in the trees as birds chirp away. Dogs greet one another as humans look in opposite directions.  Humans greet one another as dogs look in opposite directions.  Barking dogs, birdsong, chattering squirrels, the laughter of children and quiet conversation can easily be imagined.


This book, Have You Seen My DRAGON? written and illustrated by Steve Light is one to love on several levels.  Captivating illustrations with a conversational narrative make it a wonderful kind of story to share.  The spot color, the hiding dragon, and the counting are captivating and participatory.

To discover more about Steve Light follow the link embedded in his name to access his official website.  This link is to a great interview with many sketches and illustrations about this book at Seven Impossible Things Before Breakfast hosted by Julie Danielson.  Here are links at the publisher's website for A Note From Author-Illustrator Steve Light and an activity kit.  Have fun with this book everyone!
Posted by Xena's Mom at 1:42 AM