Time and time again when boys and girls, my students, get in front of a camera a different truth of which they are emerges.  Hidden talents are revealed.  A previously shy person becomes a comedian.  A rather talkative individual becomes an origami artist. 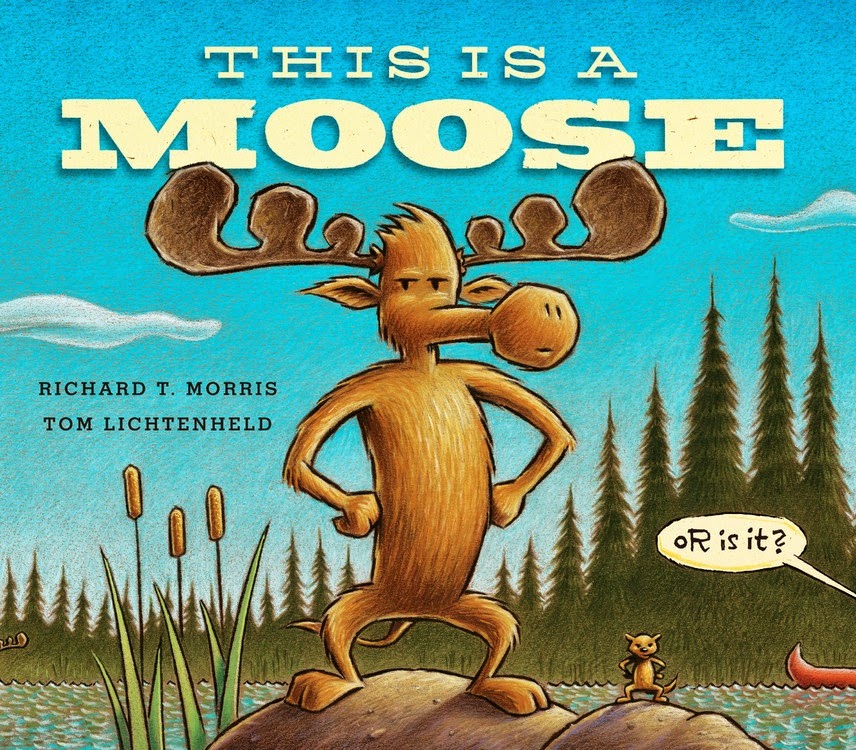 It's as if the camera gives them permission to be the way they want to be.  This Is a Moose (Little, Brown and Company, May 6, 2014) written by Richard T. Morris with illustrations by Tom Lichtenheld records the activity on a documentary film set gone wild.  Moose has a dream; an out-of-this-world dream.  Are you ready to laugh?  Well, then...

So far this is your typical, standard rather dull, but truthful, as we know it, dialogue about a moose.  The problem, as the director sees it, is the next line.  This moose wants to be an astronaut more than anything else in the world.  The director asks someone politely to help the moose out of his space suit.  Yes, readers he is wearing astronaut gear specifically designed for his moose features.

A decidedly grumpier moose is ready for Take Two when a voice calls out from the lake.  It's Grandma Moose suitably attired to be a lacrosse goalie. Take Three is interrupted by giraffe (Isn't he supposed to be in Africa?) who wants to be a doctor.  Take Four has the characters taking matters into their own hands.

What's this?  A giant slingshot tied to two tall evergreens?  Is that moose sitting in a chair in the center?  The director is sputtering with incredulity.  Take Five can't be taken.  It would seem moose is on his way to the moon.

Duck the director is about to go quackers.  In a rage he shouts a question which is met with silence, a long, thoughtful silence.  Take Six---A sound, so loud the trees shiver, reverberates throughout the forest.


You have to admire the mind of an author who can generate a sense of impending laughter within four sentences.  Richard T. Morris manages to increase the hilarity with every take by introducing new characters acting in most unexpected ways.  The humorous tension is increased further with the interplay of conversation and narration.


Three little words in a speech bubble off to the side of the matching dust jacket and book case on this title are a huge clue as to the fun-filled action about to happen.  The placement of the ISBN riding in the center of the canoe with rabbit riding on top and the giraffe paddling are bound to bring on the smiles.  Moose, hands on his hips, glaring cantankerously at the reader makes me burst out laughing every single time.  The opening and closing endpapers in tones of brown are as if we are looking through the lens of a video camera.  A slightly blurry image of a moose is front and center.  Two spoken words,

Focus! and
That's A Wrap!

become part of the narrative.  Careful readers will notice the difference in the battery icon shown at the beginning and ending

A page turn features the title page on the right with the first spoken sentence by the director on the left of a double page panoramic view of the lake and forest.  All the illustrations by Tom Lichtenheld rendered in ink, colored pencil, and gouache extend the text superbly; telling stories of their own.  Most cover both pages, others are single page pictures.

The first time the duo are framed portraits hanging on a tree next to moose.  In the second set of sentences they are part of a fold-out brochure with a picture of Saturn in the center.  When we see them the third time father moose is driving a speed boat, pulling mother moose behind on water skis.

Moose's best friend a chipmunk mirrors moose's actions accentuating the bond between the two while increasing the wonderful wit.  Comic facial expressions, body language and extra details make the visuals soar to the moon along with moose.  Details like chipmunk holding a rope which he uses to pull Grandmother's canoe into shore, the big lipstick lips on pearl-necklace-wearing Grandmother, bear holding a cup of tea, and rabbit using a carrot to point out moose's position in space on a blackboard diagram are playfully perfect.

I have many favorite illustrations in this title but my most favorite has to remain a secret.  I simply can't spoil anything for you.  I can't look at it without grinning like crazy.


When you read the narrative of this book for the first time, in between fits of laughter, you know you can hardly wait to read it aloud to a group of children.  This Is a Moose by author Richard T. Morris with illustrations by Tom Lichtenheld is meant to be shared.  And trust me when I say you will be reading it more than once at each sitting.  You might want to have extra copies on hand too.