Given the popularity of mystery books in a series, Nancy Drew Mystery Stories, The 39 Clues, The Sisters Grimm, The Boxcar Children Mysteries, The Hardy Boys Mystery Stories, A Jigsaw Jones Mystery, Cam Jansen, Nate the Great, Chet Gecko, Sammy Keyes and Encyclopedia Brown (to name a few), it's safe to say most children enjoy gathering clues and trying to crack the case.  Over the years with the introduction of a new series, a different group of boys and girls eagerly await the release of the next volume.  With each subsequent title, the bond between the readers and the fictional characters grows. 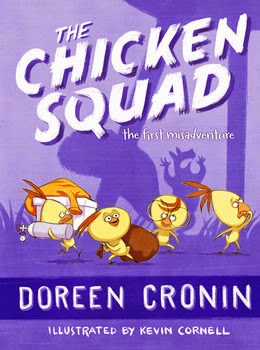 In 2011 author Doreen Cronin and illustrator Kevin Cornell presented readers with a comic cast in The Trouble with Chickens:  A J. J. Tully Mystery (Balzer + Bray) followed in 2012 with The Legend of Diamond Lil:  A J. J. Tully Mystery (Balzer + Bray).  Retired search-and-rescue dog J. J. Tully, mother chicken Moosh and her four chicks, Dirt, Sugar, Poppy and Sweetie are back in a spin-off from the original series titled The Chicken Squad: The First Misadventure (Atheneum Books for Young Readers).  Those four balls of yellow fluff take center stage in what can only be described as merry mayhem.

Welcome to the yard!
Meet the Chicken Squad: Four fuzzy little chicks who should fill their days pecking chicken feed and chasing bugs but instead spend most of their time looking for trouble and finding it.

The voice of J. J. Tully advises readers of the status of this latest episode before going off to do what he does best---take a little nap.  The quartet, minding their own business in their coop, are startled by the panicked cries and arrival of the local squirrel, Tail.  Something big and scary, enormous and frightening and huge and terrifying is after him.

Taking notes on her notepad Sugar praises Tail on his vocabulary but more information is needed.  When Dirt asks what shape it is so she can draw it on her sketchpad, Tail is at a loss.  Shapes are not his forte.  Awakened by all the fuss, J. J. sticks his head into the coop.  Tail promptly faints dead away.  To complicate matters Moosh walks in, thinking there is a dead squirrel on her living room floor.

With the adults off tending to business the four chicks try to get more information out of the squirrel in between his fainting spells.  Apparently the last fall knocked some sense into him as he is able to add additional facts to the now known shape, a circle.  Between Dirt's drawings and Sugar's notes, a startling conclusion is reached.

Having read this title twice, nearly three times now, at this point in the narrative, the silliness (but logical if you are one of the chicks) is off the scale.  Armed with grass clippings, a bag of rocks, a ball of string, a tank of helium, and an orange balloon the fearless four and one petrified squirrel set out to face their foe.  Let's just say a hose, some hot dogs and a single old shoe figure prominently in the satisfactory resolution to the chicks' first caper.


Doreen Cronin has spun a tale for younger readers loaded with one laughable moment after the other.  You can tell with every sentence how much she enjoys using language to establish a humorous scenario which envelopes the reader.  The individual personalities of the characters shine through in the snappy dialogue.  Here are a couple passages from the book.

How was I supposed to know the twitchy squirrel was going to faint?  I mean, sure, sometimes I chase him around the yard.  Big deal.  You'd do the same thing if you were a dog.  Especially if you were bored out of your mind and had nothing to read.  So yeah, the squirrel took one look at my mug and fainted.

"I hope that's not what I think it is," said Moosh.
"What do you think it is?" asked Dirt.
"A dead squirrel in my living room," she answered.
"The squirrel's not dead, Mom," said Sugar.  "He just fainted."
"How can you be so sure?" asked Moosh.  "He looks dead to me."
"Dead things smell bad," answered Sugar.  "He just smells like squirrel."


When you combine the writing of Doreen Cronin with the illustrations of Kevin Cornell rendered in graphite, watercolor and digital, you have a book guaranteed to produce a profusion of giggles.  I simply can't look at the faces of Dirt, Sugar, Poppy and Sweetie without laughing.  The shapes of their heads and beaks, the placement of their eyes, their head feathers and the huge glasses on Sugar, not to mention their body language, are designed to make readers fall in love with them.  The facial expressions on Tail, the squirrel, are delightfully dramatic.

There are no two pages (well, maybe just two) without an illustration.  They are meticulously placed to amplify the flow of the story.  The size and perspective change according to the narrative.

One of my many favorite illustrations is of Dirt and Tail hiding in the grass.  Wide-eyed and waiting they are discussing their next move in the big plan.  There is so much animation in the illustration you can almost hear their whispered conversation.


If you like to laugh, if you like to hear the laughter of others, especially children, The Chicken Squad:  The First Misadventure written by Doreen Cronin with illustrations by Kevin Cornell is the perfect pick.  You couldn't ask for a more ridiculous romp starring characters you've enjoyed in the two previous books.  This is an easy book to read aloud with voices given the gifted collaboration of Cronin and Cornell.  I can see portions of this tale being used for readers' theater.

To discover more information about the author and illustrator please follow the links embedded in their names above to access their websites.  This link to the publisher's website gives you a peek at several of the pages.  Here is a link to a fun page with a couple of news items and an engaging activity.
Posted by Xena's Mom at 1:06 AM