From The Confines Of A Square

National Poetry Month 2014 has come and gone but as far as I'm concerned poetry should be celebrated every month of the year.  With its multiple forms it can characterize a moment, a person, a thing or a place better than anything else.  Some of the most enjoyable poetry is written for children.  All you have to do is look at the shelves in a school library at any time of the year to realize the popularity of poetic works. 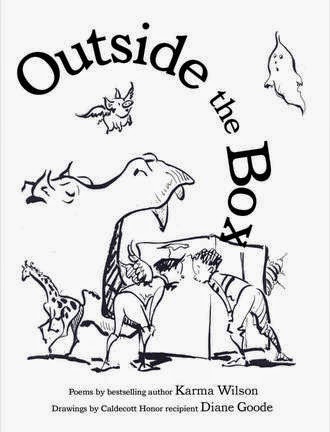 Poets who create for children of any age have a unique gift, the ability to get to the spirit of their subject.  They see the world through the eyes of their intended audience.  Outside the Box: A Book of Poems (Margaret K. McElderry Books, an imprint of Simon & Schuster Children's Publishing Division) written by Karma Wilson with illustrations by Diane Goode is a collection sure to appeal to any reader but especially to those who enjoy looking at life through the lens of laughter, thoughtfulness and absurdity.

Welcome!
Welcome to my humble book.
Turn a page and take a look.
I hope you choose to stay awhile,
read a poem, relax, and smile.

But if you find this book a bore,
can't stand to read it anymore,
and tell the world my book is lame,
do me a favor?  Forget my name.

With an introductory poem like that (pictured as a note taped to the first page), readers will be hard-pressed not to accept the invitational challenge of turning the next page.  On the following two pages a poem named for the title explains the premise for the book.  If you weren't hooked before, you will be now.

Although there are no titled chapter headings, two page illustrations provide eight divisions between the poems. Enlarging lies, being sick on the wrong day of the week, the perils of poetry writing, finding a too-cozy spot to hide and those pesky songs on re-run in your head make for unexpected endings.  A brother would exclude a sister in his winnings but a sister gets her revenge in a bubble blowing exhibition.

Who knew the boogie man likes to boogie?  If an imaginary friend speaks wrongly about you, does that make them your fantastical foe?  Are stolen kisses really yucky?  Will you look at the moon the same way tonight or the sun at the break of day?

Heed the Please Don't Feed the Bears words of wisdom.  Watch out for feisty insects.  Take lessons from the clever sheep.  Keep your eyes open for animals unknown...yet.

You'll burst out laughing at a birthday wish gone wrong and the last best gift of Christmas.  You'll shiver and shake the next time you go trick-or-treating, if you ever go again.  You'll knowingly nod at the tale told by the rider of The Great Gargantuan.  When all is read and done, at the close of the day and the book, you'll realize a grin has been growing.


These poems penned by Karma Wilson are a rocking and rolling riot of fun.  They reel you in with their rhythm and rhyme from the first line to the last.  In Wilson's hands words take on a life of their own, casting spells no matter the length of the poem.   She looks at both sides of her characters, animals and topics; the good and not so good are acknowledged with her wit and wisdom.  Here is a sample passage from the poem titled The Dream Weaver.


Caldecott Honor medalist (When I Was Young in the Mountains) Diane Goode brings her considerable skills and signature artwork using brush and pen and ink to enhance and extend this poetic collection.  Done entirely in black and white in a variety of sizes and perspectives, an air of the fantastic permeates the pages.  Her lines, heavy or fine, solid or shaded, tell their own stories; a personality quirk, a mood, an emotion or a particular scene.

On several of her two-page illustrations she adheres to the theme of outside the box having elements from the poems gathered around an open box.  She might switch it up changing the type of box or leave the box out entirely as when she has an airplane in the clouds pulling two skiers, tow ropes extended from the wings.  There is a definite sense of humor underlying many of her pictures; the same sister is used in two separate poems and the playbill highlighting Shakespeare shows him with a "Pinocchio" nose.  Several poems become shaped or reader's need to turn the book sideways to read them vertically.

A favorite illustration is for the poem, The Problem with Baking Cookies.  Two older brothers are arguing, then fighting, about who is going to get to lick the spoon, baking implements in the air.  Calmly off to the side, sitting on the floor, is a toddler...licking the spoon.  There is no mention of the third child in the poem; it's artistic wonderfulness from Goode.

I can't imagine having a bookshelf without this title, Outside the Box: A Book of Poems written by Karma Wilson with illustrations by Diane Goode, being a part of the collection.  Karma Wilson dedicates this volume to wordsmith Shel S.  I know it will fly off the shelves into the hands of eager readers for years to come just as his books continue to do.  Plan on having extra copies on hand.

If you follow the links embedded in Karma Wilson's name and Diane Goode's names you will be able to access their websites.  The second link to Goode's website shows the process for illustrating this book.  It was an immense task but worth it for the truly wonderful results.
Posted by Xena's Mom at 6:52 PM