The Joys Of Childhood

Boredom was not allowed in our home growing up.  When you live a certain way for so many years, it becomes a habit, part of your personality traits.  To this day, I have never been bored. 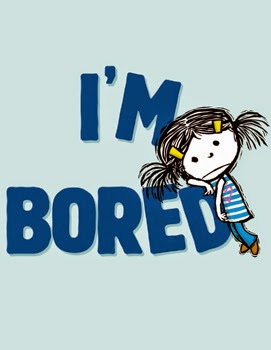 Have I ever been in the company of children who've uttered those two classic words?  Of course I have!  On September 4, 2012 when the team of author Michael Ian Black and illustrator Debbie Ridpath Ohi (their first collaboration) released I'm Bored (Simon & Schuster Books for Young Readers), readers were introduced to an energetic, persistent little girl and one very apathetic potato.

In the midst of her boredom a potato appears.  Yes...I know what you're thinking but there in the middle of this monotony a spud joins the narrative.  The girl's initial surprise lasts about five seconds before she gives it the old heave-ho.

Not looking where it is tossed, the potato arcs up and down, bonking her on the head, falling to the floor and saying as clear as day,

When the girl asks the potato if it wants to do something, it replies in the affirmative but the only thing it likes is flamingos.  There are no flamingos in the vicinity.

In fact the potato says it lacks interest in anything else because it is stuck with a kid.  To the potato, boys and girls are the worst kind of boring.  The girl is flabbergasted with the potato's assessment of children.  He replies with a challenge.

She demonstrates a series of activities.  No.  The potato is still bored, bored and bored some more.  She excitedly shows the value of having an imagination by becoming a ballerina, lion tamer and a fairy princess.  Negative.  When she continues to prove what can be done, even donning a potato costume, the potato is unfazed.

The girl explodes in a tirade, stomping off in a huff.  For a bit the potato is alone until a third character arrives.  Excitement turns to chagrin.

Without a doubt Michael Ian Black has a handle on the mind, heart and language of children.  The conversation between the girl and the potato is so real, you'll be expecting to hear the sound of voices the next time you put a bag of potatoes in your shopping cart.  All the examples the girl provides to prove children are not boring probably happen in homes every day.  The final three sentences of the story are perfection, completing the circle.


In a word the illustrations of Debbie Ridpath Ohi are delightful.  The pig-tailed girl on the dust jacket and book case, wearing yellow barrettes and the striped t-shirt with the heart, even with the dejected look, is adorable.  Opening and closing endpapers in shades of blue are patterned in the words boring and bored in a variety of font styles and sizes.  The face of the girl and her potato pal are tucked into the design.

Digitally rendered the characters pop off the stark white backgrounds.  Body postures and facial expression, even on the potato, are chock-full of spunky humor.  Ohi alters perspective and size of the illustration to make a point.  When the girl is imagining all the possibilities, faint lines of blue create scenic backdrops.

One of my favorite series of illustrations is her interpretation of swinging, jumping and flying.  Ohi places the girl in a jungle grasping a vine, skiing on a hill and box on her head floating above the Earth as an astronaut.  In all of them the potato becomes a part of the pictures as a coconut in a monkey's hands, as the head on a snowman and as a dot on Earth speaking a tiny Boring. 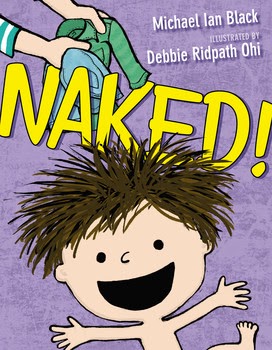 Lucky for us readers Michael Ian Black and Debbie Ridpath Ohi have sent another title out into the wild.  NAKED! (Simon & Schuster Books for Young Readers, April 29, 2014) truly strikes a chord for all parents, guardians and caregivers as well as their children.  It might be a once-in-blue-moon occurrence or a nightly ritual but it happens.

Naked!
Look at me, everybody!
I'm naked.

Leaping from a nighttime bath, a child joyously streaks down the hallway, down the stairs and into the living room as Mom runs behind.  A startled Dad holding an infant doesn't really know what to do.

Cookies taste better when you are naked.  Naked is so great it might be the only way to go to school or play on playground.  No clothes for this little person.

Wait a minute.  Did you say cape?  Okay, maybe a cape is okay.  Capes are for heroes; heroes who like to eat cookies.

Brrr...only wearing a cape can be chilly.  It looks like nakedness is over for the night.  Whew...


In this title Michael Ian Black's word choices suggest he might have personal experience with a child preferring not to get dressed after a bath.  As in the first book he depicts how quickly a mood or train of thought can shift.  It's the portrayal of this shift from naked to wearing a cape, to becoming cold and relinquishing freedom for comfort that will have readers smiling and giggling; as well as the quick dashes to get another cookie.


The color palette of purple, green, orange, teal and a splash of pink shown on the matching dust jacket and book case is as lively as the child gleefully running about naked.  The opening endpapers in the orange of the back and the closing endpapers in the purple of the front are the canvas for one happy little person in the tub, peeking in from the edge, climbing, swinging and reciting from a paper among the NAKED! letters.

Using her considerable skills Debbie Ridpath Ohi renders her illustrations digitally bringing laughter and light to the narrative.  The zeal of the child is in contrast to the mom trying to get him/her dry running behind with a towel, carrying clothes in vain, and finally getting the pajamas on for bedtime.  In each picture she is looking a little more frazzled until she lovingly kisses her child goodnight.

Nearly all of the backgrounds in this title for pictures of varying sizes are textured in lighter colors, representing wallpaper, painted walls or flooring in the home.  The facial features on the characters are hilarious as are all the little details.  The toys in the bad guys' headquarters are a little girl with pigtails, a potato and a bunny.  The letter on the child's cape is an N.  All the faces in family portraits are exclaiming at the child's nakedness.  I see a copy of I'm Bored on the living room sofa.  I'm also thinking who wouldn't want to have a pair of pajamas like this child has?

One of my favorite illustrations is when the child is in their pajamas.  Wearing little mouse slippers, they are standing on a stool brushing their teeth looking in the bathroom mirror.  The mom is leaning against the sink, hand to forehead thinking...finally.


Michael Ian Black and Debbie Ridpath Ohi certainly make a dynamic team as evidenced by their two books, I'm Bored and NAKED!  Both titles capture the essence of each situation with exhilaration.  I guarantee you will be asked to read these more than once.

Please follow the link embedded in Debbie Ridpath Ohi's name to access her official website.  She has another site, Inkygirl, which is a wonderful resource for both these books.  Here is the link to her pages on I'm Bored.  This link is to the pages for NAKED!  These links are to the publisher's pages for I'm Bored and NAKED!