No Serenity In Solace

When entering a world unlike our own you take a leap of faith.  In real time you place your care in the hands of a capable guide or if venturing alone, you rely on the research of others to supply answers to your questions.  When you open the covers of a book, you explore based upon a blurb, jacket flap summary, review or recommendation of trusted readers.  You do this with a sense of building excitement. 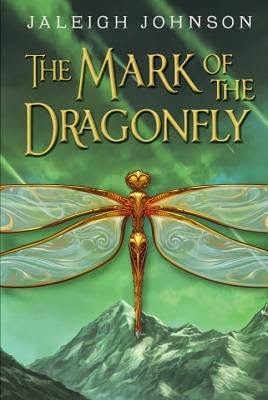 You are a wayfarer in a realm created by an author.  Sometimes you walk more slowly than others, soaking up the words like sunshine after a long cold winter.  Then there are times you inhale the words as if they are food spread before you like a feast after a fast.  In The Mark of the Dragonfly (Delacorte Press, an imprint of Random House Children's Books, March 25, 2014) written by Jaleigh Johnson thrill-a-minute action will have you racing alongside the dynamic characters as fast as you can turn the pages.

Micah brought the music box to her on the night of the meteor storm.  Piper never slept on these nights, when debris from other worlds fell from the sky.

Micah and Piper are two of many scrappers living in their community in The World of Solace eking out a living by scavenging in the fields after the meteor storms.  The storms are extremely dangerous not only because of the falling meteors but the green poisonous dust brought with them.  The townspeople by decree of the Consortium hide in an underground shelter during the storms.  There is a race to get to the fields when they are released; those getting there first get the best treasures.

Piper finds herself running outside the shelter as the meteors begin dropping from the sky when Micah's older brother Jory says Micah is missing.  Discovering him hiding beneath a narrow ledge, hoping to arrive at the fields before anyone else, they witness a caravan crossing the field during the storm; another breach of Consortium law.  What they are not prepared for is the largest meteor they have ever seen heading straight for the caravan.

As the dust clears after the shower Piper is horrified to see the caravan destroyed; Micah is now unconscious having been struck by debris from the caravan.  One person, a girl about Piper's age is still breathing in the wreckage.  Using a tarp she gets the two back to town before the townspeople leave the shelter.

The discovery of a mechanical dragonfly tattoo on the girl's (Anna's) arm and another survivor of the storm, an evil man who terrifies Anna and threatens Piper, have the two girls fleeing for their lives. Anna can't remember much about her past but the tattoo signifies she is under the protection of King Aron of the Dragonfly Territories to the south.  Piper is confident there will be a reward for the return of Anna.

Their only hope of getting to the capital city of Noveen as quickly as possible is to sneak aboard the 401, an old black steam engine pulling cars a mile long behind, which has recently arrived in Scrap Town Number 16.  Strangely enough Piper is able to by-pass the security system getting them on the train as it leaves.  This small victory is over before it starts as the chief of security, a scruffy looking boy, Gee, about Piper's age catches them.  As they say readers, the plot thickens.

You will hardly be able to draw a single breath as secrets Piper, Anna and Gee carry with them are revealed.  Slavers, Raenoll, the sarnun with incredible powers, dust poisoning, and the inevitable raiders, after the cargo on the train, flying in gliders keep the adventure at the high octane level.  As the 401 journeys toward its destination, you can feel the tension building toward a conclusion with more twists and turns than the track upon which the train rides.  It's full steam ahead.  Hang on tight!


Jaleigh Johnson's Realm of Solace is a fantastical steampunk extravaganza.  Descriptions of place are detailed, creating pictures in your mind of the towns and terrain.  Her three main people, Piper, Anna and Gee, are resilient, determined and full of heart.  All have risen from dire circumstances adapting to the situations presented in this story; digging deep to be their best for each other.

Characters so intrinsic to the plot it's impossible to call them secondary, Master Doloman, advisor to King Aron, Jeyne Steel, engineer of the 401 and Trimble, the train's fireman, are strong in their representation of good and evil.  It's the conversational interactions and thoughts of all the personalities which make this narrative sizzle.  Here are several passages from the book.

At the edge of town, Piper found a set of fresh tracks.  The land was completely devastated.  The assaults by the meteors meant no trees or grasses would ever take root here, and wild animals avoided it even when the air wasn't choked with poisonous dust.  Craters littered the ground, some of them glowing with a faint emerald light.  Piper didn't stop to look at what treasures they might contain, though for an instant, she was tempted. She'd been poor for so long it was hard to step over what might be a trinket worth a month's supply of food.
The pockmarked ground made the footing chancy, but Piper couldn't slow down.  She jumped from the lip of one crater to the next, her foot sinking in mud and snow.  Her ankle twisted.  She fell on her hands and knees.  Stifling a cry of pain, she got up and went on, half running, half limping.
"Micah, if you can hear me, I'm going to beat you until you can't hold a thought in your head! They'll slide right out your ears!"

"Don't worry," Piper whispered.  "I'm going to get us out of here."
"Chances aren't good," Anna said breathlessly.  "The knots are too tight.  Cow hitch, square knots, perfect loops---we're the cows, and they're taking us to the slaughter."
"That's good," Piper said.  "Keep talking strange---that way I'll know that you're not panicking."
"I'm scared." the girl's voice was smaller and it made Piper's chest feel tight.
"I am too," Piper admitted. She levered herself upright on the bench.  Anna was right.  The knots were tight; her fingertips were already starting to go numb.


As I was rereading portions of The Mark of the Dragonfly written by Jaleigh Johnson for this review I found myself falling into the story all over again.  You simply can't resist the energy of the adventure, the attractions and interactions between the characters and this marvelous world designed by Jaleigh Johnson.  This is a book destined for a permanent place on my personal bookshelves.  I highly recommend you get multiple copies for your libraries.