Growing up all our city streets were lined with trees.  Paths in our parks wound through wooded groves.  Even today, within minutes, I can be walking through a forest surrounding me on all sides as if I am the first and only person to have been there.  Rows of pines whispering in the breeze, stands of birches startling in their whiteness, and majestic maples and oaks cast their peaceful spell on all who stand in their presence. 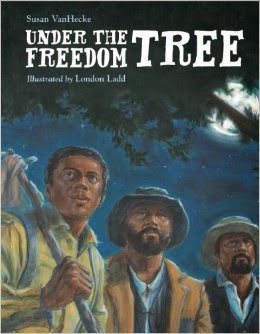 If they could talk, the tales trees would tell would be astounding.  Under The Freedom Tree (Charlesbridge) written by Susan VanHecke with illustrations by London Ladd portrays significant events in the United States during 1861, 1862 and 1863.  An oak tree, still standing today, was a witness.

Three African American men, fearful but resolved, are stealing away in the night.  They hope to find more freedom by crossing the water to the north.  As slaves their lives in the Southern soldiers' camp are tortuous.

With each stroke of the paddle their small boat moves closer to the other shore; their fate unknown.  They will not turn back.  Acting as a sentinel in the night, the old oak tree watches and waits.

In the Union camp a General considers his choices.  Before a decision is reached a soldier from the Colonel's camp, white flag waving, demands the return of their chattel.  In what can only be described as brilliant the General makes a decision based upon Virginia's secession the previous day.  These three men are now contraband of war.  The old oak tree watches and wonders.

The actions of these three, the decision of a single man, inspire others to make the journey.  Thousands seeking refuge and freedom come.  These resourceful, determined people construct a town, a town to call their own.

In the nearby ruins of Hampton, more people build what will be called the Grand Contraband Camp.  Home to increasing numbers these two places offer hope.  Then a teacher comes, giving boys and girls their first formal lessons.  The old oak tree watches and learns.

It is January 1, 1863.  Good news comes to the gathered numbers.  The old oak tree watches and rejoices.


In poetic free verse Susan VanHecke recreates the historic truths while giving readers a very real sense of the human experience in each.  Through her words we are in the boat with Frank, James and Shepard.  We stand with them as their future is being determined by General Benjamin Butler.  We understand the gift their bravery was for so many; the many who worked hard to build new lives for themselves and future generations.  To make her readers more a part of the story, VanHecke includes dialogue.  Here is a sample passage.

Then hundreds,
then more.


Two gorgeous illustrations rendered in acrylic, pastel and colored pencil spread across the matching dust jacket and book case, giving readers a close perspective of the three men looking outward and on the back of them crossing the water toward the Northern army.  It would make for an interesting discussion before even reading the book to ask listeners on what their eyes are focused.  After the single page for the title featuring the old oak tree, all the other illustrations span two pages; the verso and first page picturing them running in the night.

Brush strokes and pencil lines by the talented hand of London Ladd add emotional texture to every scene.  His chosen color palette evokes an impression of the past.  We not only look at these visuals, we are in them with this people from the past.

I really think my favorite illustration in this book is the first.  The placement of the three men running along the bottom of the page through the tall grass against the trees in the background raises a response in the reader; the urgency, the fear and courage call out.  I think it's important to note that Ladd has a full moon providing light for them.  His attention to detail and accuracy shows the passion and dedication he feels for his work.

Both author Susan VanHecke and illustrator London Ladd did extensive research for their parts in bringing Under The Freedom Tree to readers.  I wonder how many people are aware of the value of this true story.  This is an important book that needs to be shared.

For more information about Susan VanHecke and London Ladd please follow the links embedded in their names to access their web sites.  At London Ladd's site are links to several outstanding interviews about the process involved in making this book.  Here is a link to an interview of Susan VanHecke relative to this title.  There is an additional link to a site dedicated to the book itself here.  It includes many additional resources.  Enjoy the book trailer.

As I say each week, Alyson Beecher, educator and blogger at Kid Lit Frenzy has been a true inspiration.  Her 2014 Nonfiction Picture Book Challenge keeps me looking for the best books. 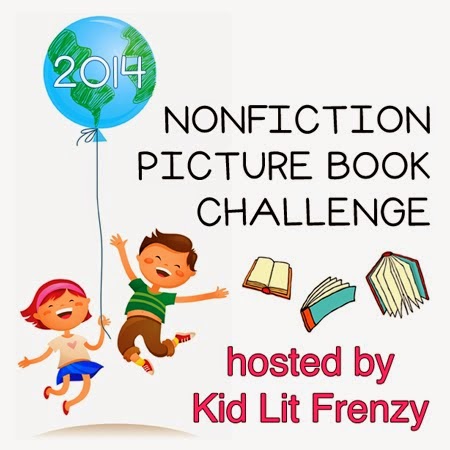