When you are younger panic changes to sheer will to live as when I nearly drowned at the YMCA during a swimming lesson.  When you are older, finding yourself momentarily lost in sunny autumn woods, everything you have learned from your outdoorsman father takes over.  No panic this time, just a calm resolve to locate the trail again. 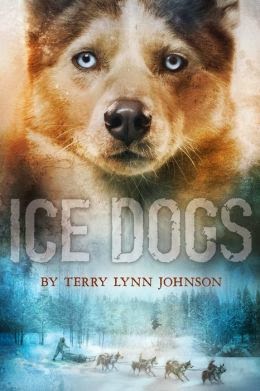 When a dog (or more) chooses you, everything changes.  You are no longer alone but a team.  They can read you and your surroundings better than you could have ever anticipated.  It's a two-way trust like no other.  This trust is tested in a grueling, riveting story of survival, Ice Dogs (Houghton Mifflin Harcourt) by Terry Lynn Johnson.

All eight of my dogs are stretched in front of me in pairs along the gangline.  They claw the ground in frustration as the loudspeaker blares.

It's a Saturday in Alaska.  Fourteen-year-old Victoria Secord is running her dogs in an effort to qualify for the White Wolf Classic.  Within twenty-four hours her desire to not only qualify for that race but to win it, to put together the best team of dogs she can, will save a life but begin a fight to remain alive.

Deciding to take six of her best on an unfamiliar trail Sunday, to talk with Cook about dogs he is selling, seems like a good idea when she starts out on the run.  Her efforts to reach his kennel and return home before dark are hampered first by the discovery of an injured snowmobiler and then by the onset of a ferocious snowstorm.  Darkness creeps in; insuring all will be spending the night in the Alaskan bush.

As day two draws to a close, it becomes apparent Chris, the rescued newcomer to Alaska, clearly does not remember the way to his home.  Their only hope is to move forward attempting to reach more traveled trails and a main road.  Despite Victoria's considerable skills learned from her late father, a trapper and musher, Chris's lack of experience, his unintentional bungling, impedes her efforts as does the merciless wilderness.  Every gain is followed by a setback; the loss of a map, an unexpected cliff or an explosion.

The scales hang in a fragile balance between life and death as day five dawns.  The relentless frigid temperatures, lack of food and water have taken their toll.  Everything is about the dogs.  Everything depends on the dogs.


From the start of this adventurous novel, author Terry Lynn Johnson, has taken great pains to ensure you will have to continuously remind yourself to breath; page-turner does not even begin to describe the depth and breadth of the non-stop action.  Drawing on her own years of dog sledding and working in the out-of-doors, she creates vivid images of the Alaskan landscape.  Detailed depictions of every vista and time of day will take you into the moment.  Through her writing the wilderness becomes an additional character.

Readers will be unable to help cheering for the two teenagers, Victoria and Chris, from vastly different backgrounds, one raised in the Alaskan bush, the other in the city of Toronto.  Johnson fully portrays two people through their thoughts, banter and conversations.  Readers become informed through dialogue of their strengths, flaws and personal sadness.

Care of the dogs, the individual characteristics of the dogs and their affinity to Victoria and even Chris will bring greater understanding to readers while adding to the story's depth.  It's as if the plot moves in sync with the motion of a dog team on the trails.  Depending on the conditions of the snow, the terrain, the weather, other wildlife, rest and nourishment, they move fast, slow, forward, right or left.  So too does the narrative.


Here are a couple passages taken from the book.

The din of the crowd fades behind us.  It's just me and the dogs and the sunbeams breaking through the spruce branches stretching across the trail like cold fingers.  The runners slice over the snow making their familiar shhhh sounds.  I breathe in the tang of spruce pitch and the icy air is sharp in my throat.

"What---?" Chris gasps in my ear.  An answering howl rises up again.  With many voices.
"Wolves," I tell him.
"I know it's wolves," Chris hisses. "I've heard them on TV.  But it's so different when they're live.  Actually right there in the dark." ...
...The dogs rustle nervously outside so I push aside the flap on the sled bag and sit up.  Freezing air attacks me.  Once I'm out of the dimness of the canvas bag, I see the cloudless night sky lighting our campsite with the glow from the stars and half a moon.  The hairs in my nostrils stiffen as I inhale. ..."That's the wild letting us know it isn't sleeping?"
"Huh?"
"We have to be aware of things all the time.  Respect it.  Maybe the wolves are just passing through," I say loudly.  "We should make noise to let them know we're here."
Chris bursts into singing at the top of his voice.
"There was an old lady who swallowed a fly.  I don't know why, she swallowed the fly..."

The dogs explode forward, with me hanging on to the gangline.  Suddenly, I'm yanked between the dogs, my arms stretched above my head, my hip dragging on the trail.
"Set the hook! The snow hook!" I grip the gangline with damp gloves, dig into the snow with my knees to slow us, and feel Gazoo's feet tramping me as he runs.  The dogs are powerhouses when they want to be.


After one complete reading and rereading many portions repeatedly, I am confident I am going to be giving as many readers as I can a copy of Ice Dogs written by Terry Lynn Johnson.  This is not just a book for those who like adventure, survival, dogs, mushing or Alaska, this is for anyone who likes a truly outstanding story.  It is a ride on the wild side to remember.

For more information about Terry Lynn Johnson, please follow the link to her website embedded in her name above.  This link takes you to an interview of Terry Lynn Johnson at From The Mixed-Up Files...  For another interview at author Caroline Starr Rose's blog follow this link. Read the first twenty-five pages by following this link to the publisher's website.