For years I (with classroom teacher permission) have conducted Poetry Breaks all year long, walking into classrooms unannounced, shouting out Poetry Break!, and standing in front of the class reciting a poem from memory. When the poem is completed I smile and leave the room.  I was introduced to this idea from attending a session by Caroline Feller Bauer. 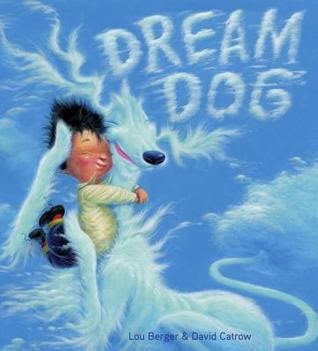 By far one of the most popular pieces was Mother Doesn't Want A Dog by Judith Viorst.  (I deliver the final two lines with an extra prop courtesy of Caroline Feller Bauer.) I don't know about you but I was one of those children who grew up wishing for a dog more than anything else, just like the narrator in the poem.  Dream Dog (Schwartz & Wade Books) written by Lou Berger with illustrations by David Catrow is about wishes coming true in the most extraordinary way.

Unfortunately for Harry his dad worked in a pepper factory.  This caused his father's nose to be very sensitive; sensitive to the presence of dogs.  A life of sneezing was not what Harry's dad wanted.

A lizard that changed colors to match his surroundings was Harry's dad's answer to his desire for a puppy pal.  It was the best an allergic father who loves his son could do.  Mathilda Gold, Harry's neighbor and friend, certainly liked the lizard more than he did.  He craved canine companionship.

Harry knew what he had to do and he did it.  Placing his X-35 Infra-Rocket Imagination Helmet (an old football helmet decorated "to beat the band") on his head, he dug deep into his mind.  Humming with all his heart, he conjured up the dog of all dogs naming him Waffle when he appeared.

It's only understandable that the two were inseparable.  Harry's dad understood his requests for rolling down the window when Waffle was along for a ride or when he suggested Waffle might need more shampoo to get rid of his fleas during bath time. Harry's response to Mathilda's less than supportive comments was a sign of unconditional love.

Before Harry's next birthday, a change in his dad's employment circumstances altered Harry's dog status.  Harry being Harry wants everyone to get along as friends should.  And Waffle...well he did what dogs do best.


Lou Berger is no newcomer to writing for children.  According to the dust jacket flap he was the head writer of Sesame Street for eleven years, one of the first writers for Reading Rainbow and the recipient of ten Emmy Awards for writing.  His narrative mixed with dialogue in this story is brimming with emotional clarity.  You have to wonder if he ever longed for a dog like Harry or was in a similar position to Harry's dad.  I won't share my favorite passage with you, it would spoil the story.  I will share this small bit with you.

...They played hide-and-seek, and Waffle would scamper deep into the park where Harry couldn't find him.  But then Harry would give his special whistle, and Waffle would come bounding out, ears flapping.
At night, Waffle would jump onto Harry's bed and snuggle close, protecting Harry from shadows and creakings.


If the artwork on the matching dust jacket and book case don't make you want to hug this book, then I don't know what will.  The shaded blues, wispy clouds and sheer contented looks of love on both Harry's and Waffle's faces head straight to your heart.  The opening and closing endpapers are covered in clouded skies; the one during the day, the other at night.  The title page and verso continue with the brilliant sky and feathery clouds.

The work of David Catrow is truly his own.  Illustrations rendered in gouache, pencil and ink cover for most of the book two pages; others cross the gutter creating slim panels along the right or left side.  Sometimes Catrow will choose to group smaller pictures together or use a single page to make a point.  His use of color is spectacular conveying every magical mood.

The details in his work are pure fun; zip drip and sneez ex on the father's medicine bottles, Mathilda's bathroom with a fishing pole in the shower, a toy boat stuck in the toilet and a one-eyed octopus wearing a sailor hat pictured on the wall, the dinosaur lamp in Harry's bedroom and the pepper factory.  Every reader is going to want a dog like Waffle; filled with unrestrained joy and life.  One of my favorite two pages shows Harry and Waffle playing hide-and-seek, running beneath the clouds and peacefully sleeping together.  The layout couldn't be better.


As soon as I saw the cover of Dream Dog written by Lou Berger with illustrations by David Catrow, I knew it was going to become a favorite.  It's about wishing your dreams into existence.  It's about the bonds between a father and his son.  It's about love.  I love this book, I really do.  Share it now with as many people as you can.

To learn more about David Catrow follow the link embedded in his name to his official website.  This link takes you to the publisher's website where you can view additional pages.  I'm so happy with this book; I'm giving away a copy.  Please fill in the form below.  The drawing will take place at 5PM EST tomorrow, February 28, 2014.