Within a heartbeat they can tell you.  Not only do they have an answer but they want to know what yours is.  No matter how many books the library may have or resources you provide, it's simply never enough.  Truthfully over the years I have learned more than I ever knew I wanted to know about a large variety of animals because of students' quests to discover everything about their favorite animal, domestic and wild. 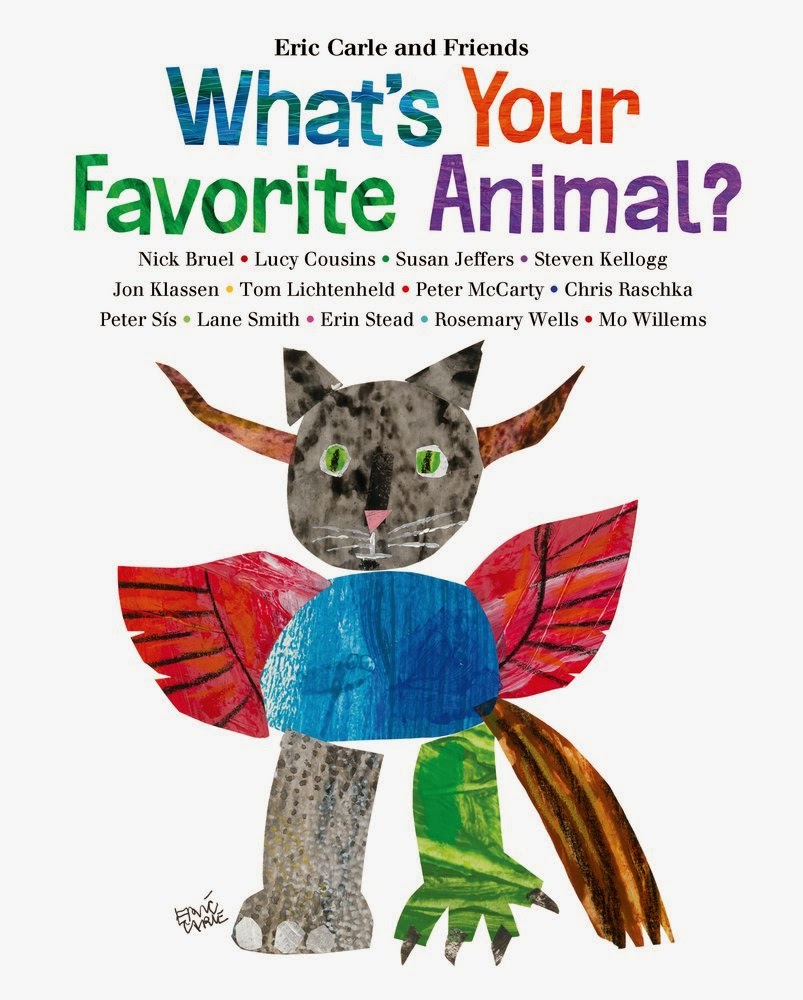 The extent of their interest is not limited to facts either; each having an uncanny ability in their individual style to recreate their animal visually.  How exciting for all of us that Eric Carle and thirteen other illustrators decide to share their choices.  What's Your Favorite Animal? (Henry Holt and Company, January 2014) not only answers the question but entertains with text and pictures by each.

I have always liked all animals.

So begins the story Eric Carle tells of his cat who liked to chase and fetch a string bean until she decided it was better off tucked away from view.  A ladder would definitely be needed to see eye to eye with Tom Lichtenheld's animal friend after a trip to Africa or the zoo.  You will be hard pressed not to gasp and utter yikes after seeing the smile on Mo Willems' crawling critter's face.

A Christmas tradition with a happy ending, especially for the main course, is a tale with timeless appeal as revealed by Peter Sis.  Giving us a whole new perspective on one of nature's slowest movers, Chris Raschka reminds us patience has great rewards.  Nick Bruel's Bad Kitty is up to his typical tricks.  Could it be because of a favorite animal choice?

Let's see now.  Who could possibly like a high-jumping bunny, these-pillows-are-my-spot dog, or a boastful elephant?  It might be Rosemary Wells, Lane Smith, Jon Klassen, Susan Jeffers, or Peter McCarty?  Or perhaps one of them has voiced their love of a duck (without a hat) or a herd of wild white horses?

A memory of cows coming to life at night, a kinship felt with penguins and a colorful connection to leopards fill the pages by Lucy Cousins, Steven Kellogg and Erin Stead. (No, I did not put them in order.) Just when you think you might suffer from happiness overload due to the wonderful words and colorful pictures on these pages, the final two host childhood pictures of each artist with a short biographical sketch.  Who could ask for anything more?


An amusing incident, a whimsical poem, a message of hope, personal reflections from now and then, and tales full of hilarity reach out, pulling readers into the realms of these fourteen individuals who, fortunately for us, populate the children's literature community.  All the wit and wonder we love about their work is condensed into these two page spreads; how they choose to speak about their favorite animal is a direct reflection of them as authors and illustrators.  You will find yourself alternating between a slow smile, a giggle, a guffaw, a sigh, and nod of understanding more than once. These fourteen people say much with few words.


Eric Carle's notable cut-paper collage decorates the front dust jacket with a list of the contributors and their animals on the back.  Upon removing the jacket readers see all fourteen creatures spread across both sides of the cover with the artists' signatures next to their work.  The pristine white background makes all the elements pop off the pages.  Sunny golden opening and closing endpapers brushed in paint announce the total joy to be found in this book.

Even without their name as part of the text or a signature within the illustration, each visual clearly identifies the creator; vividly displaying their unique styles and mediums.  The deft paper cuts for a cat's fur, the fluffy cloud cleverly becoming a beehive hairdo for the ruby-lipped giraffe, the loose swirls of orange, amber and blue making a home for a snail, small delicate lines and softened brush strokes bringing the essence of penguins to the page or cow paintings papering a wall as a boy dreams one into life, not only feature an animal but the considerable talents each illustrator brings to this book and everything they do.  Every single one is a masterpiece.


This variety in selected animals, narratives and illustrators is exactly what makes What's Your Favorite Animal? by Eric Carle and Friends a true treasure that everyone should read and own.  It's like holding an art gallery in your hands.  The end flap states:

All royalties from this book will be donated to The Eric Carle Museum of Picture Book Art which was founded by Eric and Barbara Carl in 2002.

Links to each of the contributors' websites (when possible) have been placed in their names above.  Follow this link to the publisher's website for a peek inside this title.  Enjoy the videos collected by some of the artists.  If you have other videos you would like me to include feel free to leave a link in the comments below.