It is the year Alaska and Hawaii were admitted to the Union as the forty-ninth and fiftieth states.  It is the first time Barbie made an appearance with the other dolls in toy stores.  It is the year Time Magazine's Man of the Year was Dwight D. Eisenhower.  Rod Serling's The Twilight Zone airs on television in October on CBS following Bonanza in September on NBC. 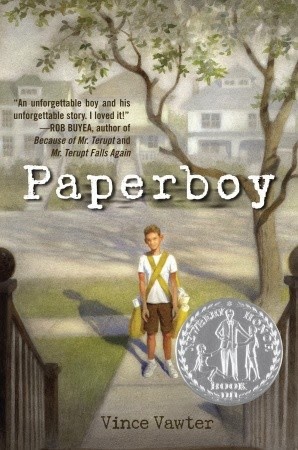 I'm typing about the stabbing for a good reason. I can't talk.

While not excited about taking over Rat's (Art's) paper delivery, he knows his skill at having a ferocious fastball is responsible; unintentionally hitting his friend on the last day of sixth grade before summer.  Picking up the papers with the other boys, cutting the bundles, folding the papers, loading up the bags and throwing them or placing them on people's porches is not the problem.  The real dilemma is collecting the money each Friday evening for the papers.  He voices his concerns to Mam.

Mam, Miss Nellie Avent, an African American woman, has been the housekeeper for the boy's family for more than six years.  A Bible-reading, choir-singing but not opposed to fortune tellers and believing in the Hounds of Hell, Mam dispenses advice and love to the boy.  She treats him fairly with respect, looking him directly in the eye when they are in conversation.

The boy's parents, good people who love their son, hire a tutor to work with him on his speech.  His mother is at home when not involved in the social commitments as a member of the country club.  Even after working many hours at his job, his father usually manages to spend time playing catch with the boy.  It is a good family even if there is a secret.

Mam did warn the boy to stay away from one of the local junk men, Ara T, but he needed his knife sharpened to cut the newspaper bundles open.  Big Sack, an African American man seems to be more visible in the neighborhood lately.  It's a puzzle as to why TV Boy, at one of the houses on his route, sits and stares at the television without moving.  Mrs. Worthington, one of the most beautiful women he has ever seen, definitely has a fondness for whiskey to lessen frightening problems.  A merchant marine, Mr. Spiro, with his eloquent manner of speaking and astute methods for problem solving, reveals a home filled with untold treasures.

These are the people who populate the boy's summer days, altering his life more than he ever would have anticipated.  There are questions never answered but other resolutions forge friendships.  Heart-stopping fear is replaced with a keen sense of security.  Loyalty, justice, and love are life's greatest teachers.


From the very first sentence, building to the last thought on the final page, there is an undercurrent of tension; a things-are-going-to-happen feeling permeates this first person narrative.  Vince Vawter, using his own life experiences, creates a story so real you will begin to feel your own heart beat in sync with that of the main character.  His life becomes your life as each page is turned, your world slides away as you are transported to 1959.

The boy dislikes commas, the pauses they create, so he does not use them.  The sentences are grouped in specific blocks, unique paragraphs, of dialogue and thoughts.  Even when Little Man is stuttering the story flows, albeit more slowly.  There is still with a seamless connection to all the events.

All the characters, no matter their role in the boy's summer month, are significant pieces in the complete picture.  Distinct personalities are fully realized to the point where you wouldn't be a bit surprised to see any of them walking down the street when you look out your window in 1959 Memphis.  Each person is integral to the boy's growth; to gaining wisdom and understanding.

Here are a couple of examples of writing from the book, although the number of sticky notes visible along the page edges grew as I kept reading.

In the part of Memphis where I live all the street names are sunk in the concrete on every corner in nice blue tile.  I know all the streets but I like to read the name in my head each time I come to one.  Vinton.  Harbert.  Carr.  Melrose.  Goodbar.  Peabody.

The streets are like friends that I don't have to talk to.


I felt like I was falling off a cliff and trying to grab for tree limbs or anything to slow me down like cowboys do in television shows.
s-s-s-s But fiction is a story and s-s-s-s nonfiction is the s-s-s-s truth.
And I reply that you are referring merely to the rule of law.  I contend that one is likely to find more truth in fiction.  A good painting after all is more truthful than a photograph.  Remember that, Young Messenger, for all your days.


I can guarantee you will never forget reading Paperboy by Vince Vawter.  It is a powerful, moving portrayal reaching out to the hearts and minds of readers.  A two page author's note at the end offers explanations and invites questions.  Make sure you follow this link to Watch. Connect. Read., the blog of teacher librarian, John Schumacher.  It is a three question interview of Vince Vawter after he won the Newbery Honor plus great additional resources.  By following the link in embedded in Vince Vawter's name above you can access his website.  This link takes you to the publisher's website so you can view and read forty-two pages from the book.
Posted by Xena's Mom at 4:52 PM