To Complete A Sweet Beat

Eventually the prize was delegated to the oldie-but-goodie-not-working-worth-a-hoot pile but the recollection of the contest never fails to bring on a smile.  We had been practicing.  We could hardly wait for the night to arrive.  When the familiar tune started, the dance floor was soon packed with competitive couples.  We added extra steps, moving and grooving to the beat.  Before long we were one of a few couples left twistin' the night away.  When we were announced as the winners, we looked at one another and burst out laughing.

Music has a magic to it; a way of lifting your spirits or aligning with your moods, conveying what words sometimes are unable to say.  When you combine it with the spell cast by folklore, you will find yourself reading Goldi Rocks and the Three Bears (G. P. Putnam's Sons, an imprint of Penguin Group (USA) Inc., February 6, 2014) written by Corey Rosen Schwartz and Beth Coulton with illustrations by Nate Wragg.  Get out your dancing shoes as the fractured fun unfolds. 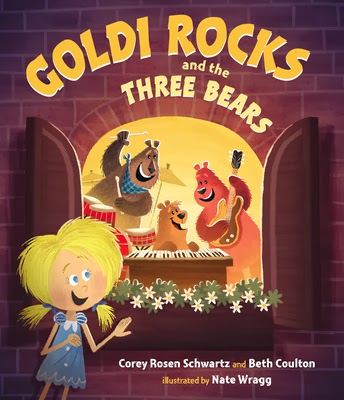 Once upon a rock and roll time,
three bears in a band jammed with ease.
The Papa Bear drummed,
the Mama Bear strummed,
and Baby Bear tickled the keys.

Now these bears loved to make music and were good but not good enough to bring in the crowds.  Papa Bear had a plan.  Leaving their porridge to cool one morning, they went on a quest to find a lead vocalist with a range much higher than theirs.

As if by some fairy tale fate, a girl came knocking at their door.  While the smell of breakfast got Goldi's attention, stepping inside made her cheer.  It seemed the bears had a stage jam packed with musical gear galore.

Three sets of mikes were too tempting.  Headphones, three, revealed a tune she couldn't resist.  Now a tough choice presented itself; should percussion, guitar or keyboard be used to assist?

It was sad to note but Papa Bear, Mama Bear and Baby Bear had no luck.  Coming home they saw a chaotic scene.  It was clear someone had been there; not something they had foreseen.  A dozing Goldi was startled awake; her piercing exclamation relieved their frustration.  A marvelous melody finally fulfilled wishes for the fabulous four.


Corey Rosen Schwartz (The Three Ninja Pigs) and Beth Coulton show readers they have a true affection for word play (and music) giving the story its own rhythmic cadence.  Fashioning a harmonious blend of the original narrative with their rocking and rolling spin, as pages are turned toes will be tapping.  Humor emerges in their choices, combinations of language, and the contrasts it creates.  Here is a single example.

The family returned to their cottage,
distressed from their lack of success.
When they saw the inside,
the Mama Bear cried,
"Egads! What a terrible mess!"


Readers are given a "door's always open" hint at the events to come when looking at the book's jacket.  Rich shades of brown and golden yellow exude cozy warmth.  The grinning mouths, laughing eyes, and movements of the characters frozen in place all say good times are coming.  Throughout the book this color palette and the lively animation of the three bears and Goldi are continued with entertaining results.

Using pencils, painted textures and Adobe Photoshop, Nate Wragg brings spirited life to this tuneful rendition of an old favorite.  Wragg chooses to alter the size of his illustrations; two pages, single pages and smaller visuals grouped on one page, to enhance, extend and interpret the narrative.  His added details are downright hilarious; the insects with thumbs down at the bears' original performance, a speaker popping out, or two pigs plugging their ears as the third one sings.

One of my favorite illustrations is a single page featuring all four characters as if we are on the outside looking into the cottage.  Mama Bear is playing her guitar.  Papa Bear is giving them a beat on his drums.  Baby Bear is placing his paws across the keyboard.  And Goldi?  She is singing her heart out as a crescent moon shines among stars and musical notes.

I've listened to more rock and roll music in the past several days, than I have in years.  Goldi Rocks and the Three Bears written by Corey Rosen Schwartz and Beth Coulton with illustrations by Nate Wragg will have readers ready to grab the nearest instrument (or slap a beat on their knees), happily sing or dance around the room.  It's about time Goldilocks and those Three Bears formed a lasting friendship.

For more information about each of the authors and the illustrator please follow the links embedded in their names which will take you to their website or blog.  Follow a link here and here to learn more about the process of writing this title.  To celebrate the book birthday of Goldi Rocks and the Three Bears, which is today, follow this link to a giveaway.