Avid readers have piles of books, stacks of books and bookshelves stuffed with books they have read or want to read.  I know I do.  Within those needing to be read are a select group of titles.  They are not the new releases I read as soon as possible.  They are those I set aside in anticipation of greatness. 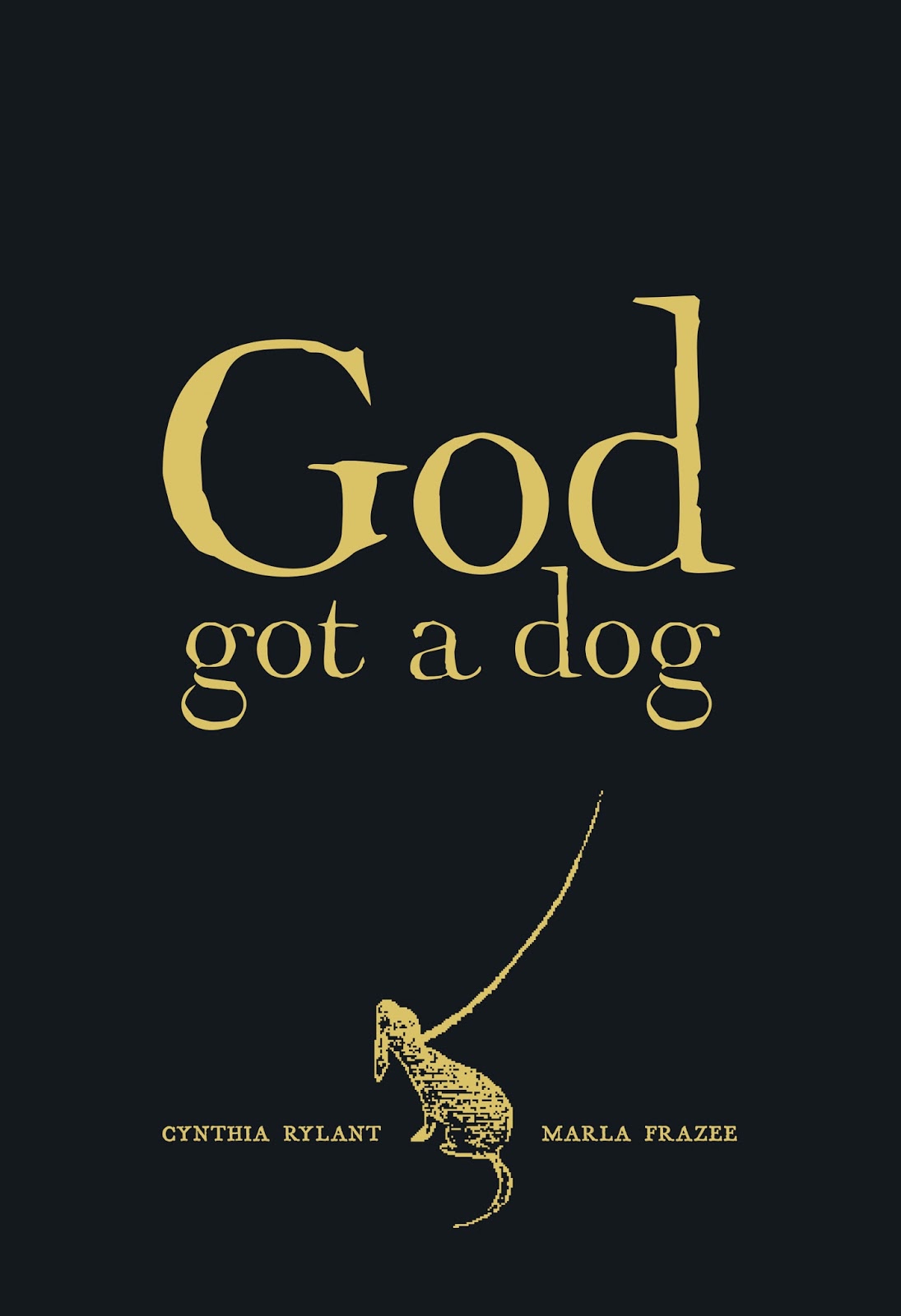 There are authors' and illustrators' work I treasure.  When two of them collaborate on a book, it's like a phenomenal present.  All books are gifts but these are in a whole separate category.  God got a dog (Beach Lane Books, October 29, 2013) written by Cynthia Rylant, Newbery Medal and Honor winner, with illustrations by two-time Caldecott Honor winner, Marla Frazee is one of these cherished treasures.

And He was groggy,
so He got a nice cup of coffee
and went to sit
under an apple tree. ...

So begins the first of sixteen poems, initially appearing in a larger collection titled God Went To Beauty School (HarperCollins).  God decides to participate in the human experience; doing what people do or dream of doing.  God's descriptions for each scenario will make you pause, ponder and sigh in pure pleasure.

He realizes, like many of us, the importance of being near a tree, seeking shelter and comfort in the size and canopy of branches overhead.  He notices the joy resulting from the simplest things.  When you paint someone's nails you get to marvel at the bones in their hands.

Being above or next to water, is not the same as floating across it in a boat.  Testing whether spaghetti is completely cooked leaves a noodle zapped on Jupiter.  A visit to the doctor produces no cure for the little skip in a heartbeat.

Jail, a bathtub, a street, an alley or boardwalk reveals God's anger, shyness and pure elation.  Wouldn't it be great to call up Mother Teresa when you're sick to ask for a visit?  God can and does.  There's a very special little boy God wrote and read a story to as a child.  Who do you think it is?

Taking a break, discovering a place of true Holiness, working at a desk all day or writing more than a couple letters to a celebrity allow us to put ourselves in those situations, seeing God's point of view.  India, elephants and the loss of everything give readers a new understanding of a Plan.  Particularly comforting is the final poem, knowing how at the end of a day, God finds warmth as many of us do.


Even after multiple readings, I go back over and over to savor the words of Cynthia Rylant.  In every poem she captures the essence of the activity bringing an element of reverence to each.  There is a childlike wonder in the observations and yes...a sense of humor too.  I like that the gender of God varies from poem to poem.  Here's the beginning and end of the poem, God wrote a book.

No, not that one.
Everybody thinks She
wrote that one,
but She didn't. ...

... She read it to the boy
at bedtime
because the boy couldn't sleep.
So God read him a book.
The boy grew up.  He became a writer.
Which one?
Not telling.


More than a year ago this series of tweets appeared on Twitter. (Thanks to Marla Frazee for granting me permission to use them.)  These clearly convey the process used to get an illustration "just right"; to have it enhance and extend the text as well as tell a story all its own.  I had no idea this would be one of the more than sixteen pictures in this book.  I don't know about you but I can hear the sound of the television and the soft flapping of bird wings.  I can feel the warmth of true companionship.


I'm illustrating a Cynthia Rylant text now. I keep pinching myself which is why I messed up earlier tweet. @lindaurbanbooks @barbaraoconnor
— Marla Frazee (@MarlaFrazee) January 5, 2013


Some drawings are harder than others and this one is just killing me. pic.twitter.com/E9b4paWE
— Marla Frazee (@MarlaFrazee) January 6, 2013


This may not ever come together, but after 3 days of fighting the drawing, I'm gonna start painting. pic.twitter.com/TjkL8qrD
— Marla Frazee (@MarlaFrazee) January 6, 2013


Painted all day. Will resume tomorrow. This is why it takes me a year to illustrate a book. pic.twitter.com/nM0SjjG3
— Marla Frazee (@MarlaFrazee) January 8, 2013


Off to get latte. Hoping caffeine helps me figure out my next move on this. pic.twitter.com/ZJDoBpHW
— Marla Frazee (@MarlaFrazee) January 9, 2013


I woke up today knowing that I have to redo that illustration I posted. Happens at least 1x a book. Ugh. Stay tuned 4 round 2.
— Marla Frazee (@MarlaFrazee) January 15, 2013


Re-did the illustration. Not quite sure if it works better than the first one or not. pic.twitter.com/GVUONAfa
— Marla Frazee (@MarlaFrazee) January 20, 2013


The black and gold matching dust jacket and book case is spectacular in its simplicity.  Sprinkled in the upper left-hand corner of the back are a cluster of stars.  The opening and closing endpapers make me think of the vastness of the universe; shades of gray patterned in darker stars.

On the title page is a tiny white mug with a big "smiley" face on it beneath the words.  God is holding this in the first poem.  It appears again on the final page, the dog leaning over to take a sip.  It's details like this that elevate a book to excellence.

Each poem is accompanied by a single page illustration.  Marla Frazee has chosen to have God appear at varying ages and ethnic backgrounds, a child, wearing a yellow life vest, drifting in a swan boat, a middle-aged, apron-wearing, hair-in-a bun woman sitting at a table covered with a red and white checkered tablecloth, a vest and bandanna wearing biker guy angrily shouting in front of a jukebox or a young boy skating along a raised boardwalk.  All her portrayals of God have a faint but definite light around them.

The color palette used, the intricate lines and shading all convey a vivid sense of time and place.  As each poem is read you are drawn into the illustration as a willing observer.  All of the illustrations in this book are my favorites, each speaking to me differently as do the poems.  The one which tugs on my heart, as you can easily guess, is of God spotting the stray dog by the railroad tracks in the pouring rain.


To tell you the truth I was literally stunned after reading this the first time; more than several of the poems and pictures brought tears to my eyes.  God got a dog written by Cynthia Rylant with illustrations by Marla Frazee is, in a word, wondrous.  I love it...every single part...with all my heart.

If you wish to know more about either the author or illustrator please follow the links to their respective websites embedded in their names.  This link to the publisher's website offers readers the chance to read four of the poems.