Her Patience Was Rewarded

On the same day in April of 2011 two books were released about the same person.  One is fiction, the other is nonfiction.  Both appear on the ALA Notable Children's Books 2012 list.  Both received starred reviews from Booklist and Kirkus.  One received a Caldecott Honor award.

The person whose life is showcased in each is Jane Goodall.  Me...Jane (Little, Brown and Company) written and illustrated by Patrick McDonnell, the fiction title, is the recipient of a Caldecott Honor award. In July of 2011 I reviewed it here.  If you choose to read my review you will see I am a fan of Patrick McDonnell's work. 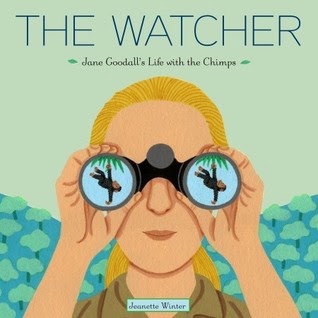 I also have a deep admiration for the books written and illustrated by Jeanette Winter; many have a place on my personal bookshelves. Two nights ago I was reading several titles, deciding to revisit them in posts on this blog.  The Watcher:  Jane Goodall's Life with the Chimps (Schwartz & Wade Books, an imprint of Random House Children's Books) is an extraordinary book about one woman's pursuit of her life's passion.

"Jane, Jane, where are you?"
"Jane, can you hear me?"
EVERYONE had been searching for hours and hours, looking for little Valerie Jane Goodall.

Jane had been carefully and quietly waiting to see a hen lay an egg.  She was only five years old.  She continued to feed her curiosity by observing all the creatures in her immediate surroundings but her dreams grew, fueled by her love of books like Doctor Dolittle and Tarzan of the Apes.

Jane wished with all her heart to go to Africa, working and saving as she got older.  Finally journeying to Kenya she met Louis Leakey who asked her to go to Tanzania to study chimpanzees.  Weeks stretched into months as Jane watched and waited; she became one with the chimpanzees.

One day a chimpanzee she had named David Greybeard broke the contact barrier, taking a banana from her hand. His acceptance of Jane opened the door for the others.  Now Jane watched and wrote and watched and wrote.

As the years passed Jane could see her beloved chimpanzees would be better served if she left them, alerting others to the need to preserve their home and protect them from those who would bring them harm.  Her voice was heard around the world.  Not only did Jane realize her childhood dreams but she championed for those unable to speak for themselves.  She watched, waited and worked.  The world is a better place for her efforts.


In acquainting readers with Jane Goodall, Jeanette Winter chooses to highlight those very things which make her fully human; befriending a robin who builds a nest in her bedroom bookcase, hiding money under a rug as she saves to go to Africa and the vulnerability she feels when struck by malaria in the forest of Gombe.  Winter's depiction of the process in gaining the chimpanzee's trust is to focus on the daily activities of Jane; the utmost care to be seen but not be intrusive.  Each time Winter inserts a quote of Jane's into the narrative we feel our affinity to her become stronger. The carefully formed sentences, a few on each page, tell us exactly what we need and want to know about Jane Goodall.  This is Jeanette Winter's gift as a writer.

Using acrylic paint and pencil for her artwork, it beckons us into the world of Jane Goodall immediately when the dust jacket is unfolded.  The illustration extends to the flap edges on both sides; the rolling hills of the forest with chimpanzees peeking from the treetops on the back and a small square inset with Jane and David Greybeard in the center.  Using only Jane's face and hands as she looks into her binoculars with the chimpanzee in each lens beneath the title is brilliant.  The book's case is different, patterned in the forest hills populated by the primates.

The opening endpapers in a sky blue, the closing endpapers in a mint green feature a single forest bird in flight.  The verso contains a small visual of Jane's childhood home opposite the title page on the right of a young Jane holding her cherished stuffed toy chimpanzee.  Prior to Jane's arrival in Africa, Winter's visuals are small squares with elements spreading to the outside of the frames. The remainder of the book is nearly all two page pictures.  Single page illustrations are facing one another tied together with a common element.

These illustrations in Jeanette Winter's own unique style are full of all the wonder felt, the delight known and the good and worrisome life experiences of Jane Goodall.  My favorite is of Jane sleeping on the Peak at night to be close to the chimpanzees.  The hues of blue, green, purple and brown with the full moon and stars as silent observers give a sense of peace and purpose.


Jeanette Winter closes this book with two sentences toward the end of her A Note About This Story:

I wish that when I was a little girl, I could have read about someone like Jane Goodall---
a brave woman who wasn't afraid to do something that had never been done before.  So now I've made this book for that little girl, who still speaks to me.

Certainly The Watcher:  Jane Goodall's Life with the Chimps written and illustrated by Jeanette Winter will be the perfect match for those readers needing to know following your dreams can make all the difference.  It is the kind of biography readers will want to read and reread.  I know I have.  If you would like to see more pages from this book, please follow this link to the publisher's website.  For a delightful interview with Jeanette Winter on the publication of her book Kali's Song, please visit John Schumacher's blog, Watch. Connect. Read.

I am excited to be participating in Alyson Beecher's 2014 Nonfiction Picture Book Challenge hosted at her blog Kid Lit Frenzy.  Make sure you stop over there to see all the other nonfiction picture books showcased by other bloggers. 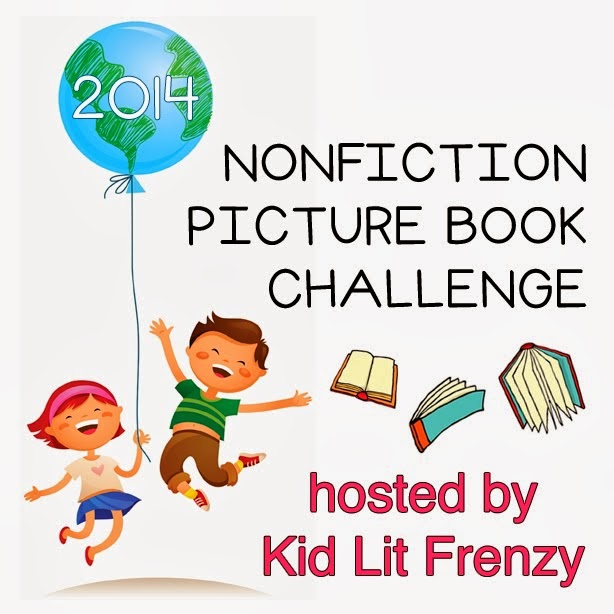