A line spoken in a movie, a phrase written in a book or a tune from a well-known song can become etched in the collective minds of many; Toto...I have a feeling we're not in Kansas anymore (The Wizard of Oz movie), Holy Bagumba! (Flora & Ulysses:  The Illuminated Adventures by Kate DiCamillo,  2014 Newbery Medal winner) and the theme music from Jaws, the movie.  Their meanings have and will evolve over the course of history becoming a part of pop culture.  Whether they are spoken, read or heard, people will have a connection in common. 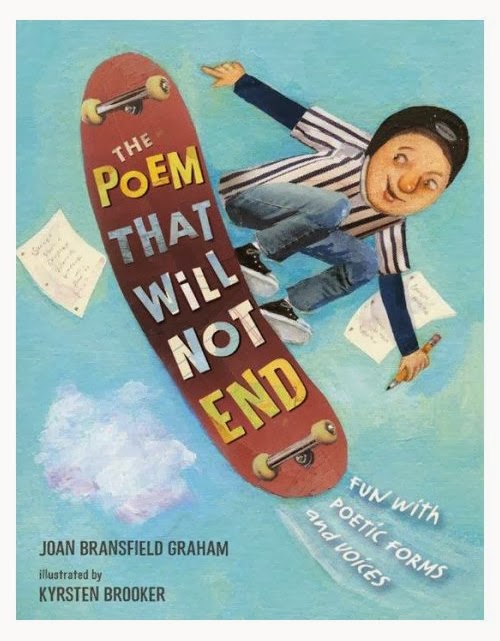 Sometimes one of these iconic phrases or songs will run on repeat in our minds needing another powerful phrase or song to chase it away.  Sometimes the activities of our days or the weather feel like they are on repeat, too.  More than once I've read people's declarations on social media this winter about feeling like they are in the Bill Murray, Audie MacDowell, Chris Elliott movie, Groundhog Day.  A boy in The Poem That Will Not End:  Fun with Poetic Forms and Voice (Two Lions) by Joan Bransfield Graham with illustrations by Kyrsten Brooker has a similar problem.  He has poetry in his thoughts...continually.

It started with a rhythm,
a rhythm and a rhyme.
It wouldn't let me stop,
it ate up all my time.

That's exactly how it began but it did not stop.  At breakfast his mind was busy and his fingers twitched; alphabet-letter cereal shaping words (plus some squashed bananas) made his little brother squeal. Using a crayon on his buddy's shirt and a stick on the playground dirt, this young poet had no control.  Everything became the means to his end including French fries at the midday meal.

Recess writing in chalk produced an acrostic verse. After school tracing in mud composed a concrete, soccer ball ode. Riding and racing away, his bike seemed to speak.  His efforts to run from this worrisome word explosion were in vain as a sneeze at dinner spread a poetic three-liner in peas on the kitchen wall. Oh, this is getting worse.  When a thunderstorm rolled in that evening, the gifted guy was scribbling with pick-up-sticks on the steps into the house.

The craziness continues as he gets ready for bed.  These rhythms and rhymes keep spilling from his head.  After tossing and turning all night, he drags himself into school wondering if there is any end in sight.  What?  That's the next assignment?! Thank you, Ms. Frost.


The title only hints at the fun readers have following the story of Ryan O'Brian's poetic problems penned by the clever, creative Joan Bransfield Graham.  The entire narrative is a chain built from four-line rhyming verses.  Tucked within this story the living room, breakfast table, playground, school cafeteria, soccer field, on a bike or skateboard, kitchen, outside the house, bathroom, bedroom and classroom are all places poems seem to pop forth from Graham's inventive mind.  Twenty-three poems total, counting the story itself and a special poem on the back jacket and book case, in at least fifteen fabulously written forms, characterize this typical boy having a not so typical day.  Here is one of the poems.


Soccer Ball
Soccer ball,
you are the center,
sun of our universe.
We are planets orbiting
your supreme presence,
hoping to rocket you,
like a blazing comet,
into the galaxy of
our goal.

Mixed-media collage art pieced together by illustrator Kyrsten Brooker completely captures every poetic particular.  The illustration on the front cover of Ryan O'Brian soaring on his skateboard shouts out a greeting as the picture on the back invites speculation.  A paper is taped to a brick wall; a pencil is lying on the ground next to Ryan's dog looking up at the poem titled Anonymous. Guess who's peeking around from behind the wall in his signature striped shirt and baseball cap?

With little effort at all you can hear the sounds every single one of Brooker's illustrations makes.  Her pictures are alive with movement and brimming with humor from the title page to the final page.  Choosing to broaden and heighten the text with either two page spreads, single pages edge to edge or individual elements on white space, she takes readers by the hand leading them into Ryan's world.  And we are so glad she does.  We get to feel all the emotions on the character's faces from place to place.

The scenes at the breakfast table and during the storm are two of my favorites, each covering two pages.  The alphabet cereal scattered upon the kitchen table, Ryan holding up toast spelling face place, the dog looking woebegone with goo and bananas on his head and the baby covered with his meal, a poem written on his high chair tray are laugh-out-loud funny.  With overlapping shades of blue and gray in prominence, wind swirling about loose newspapers, tree tops bent in the wind, waves rolling white, an umbrella carrying woman scurrying and blackbirds screaming, Ryan conducts from the porch top.  His written poem covers the stair steps beneath him in all its Italian sonnet glory.

Written by Joan Bransfield Graham with illustrations by Kyrsten Brooker The Poem That Will Not End:  Fun with Poetic Forms and Voices is a lively look at the world of poetry through a delightful story.  Writers (and even those who would rather not write) will hardly be able to resist giving at least one of these forms a try.  The final three pages are Ryan O'Brian's Guide to Poetic Forms and Voices.  Nineteen terms are explained in the first section, five in the second.  You are going to love this book so much you will not be able to wait for National Poetry Month or even a special poetry day in your classrooms.  I know you will be hearing read it again more than once or twice.

Please follow the link embedded in Joan Bransfield Graham's name to her website.  This link is to the final stop of the book's blog tour at Jama's Alphabet Soup.  Visit the blogs to gain more detailed information about this title.  Here is a link to a short review by Julie Danielson at Kirkus.
Posted by Xena's Mom at 12:38 PM