What Did He Say?

It happened on Monday night.  Stepping out the door for the final stroll around the yard with Xena, their music filled the night air.  The spring peepers were peeping.  The symphony announcing spring has started.  As soon as you get too close the cheerful tunes pause until you move away.  Neither they or their amphibious cousins stay visible but prefer the security of being under water. 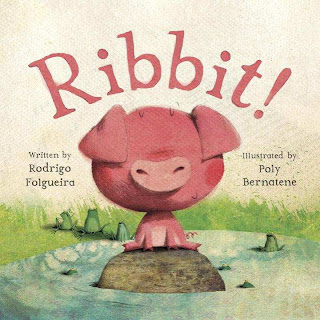 It's a rarity, a treasured moment, when a frog does stay poised on a log, rock or lily pad.  You might even say it's surprising when this happens.  But not as surprising as Ribbit! (Alfred A. Knopf) written by Rodrigo Folgueira with illustrations by Poly Bernatene.


Once upon a time, there was a pond that was home to a family of frogs.

Well, they thought it was their home until one morning they make a shocking discovery.  Smack dab in the middle of the pond, sitting on a rock, is a pig.  You never heard so much muted croaking conversation and speculation among this crew until now, wondering why this little pink porker is where he shouldn't be.

Even more astounding is the pig's reply when asked by the fearless frog leader how they can help him.

The chatter begins anew and he replies with the same resounding word. News of this unusual visitor spreads faster than a lightning strike through the forest.  Each animal, raccoon, weasel, turtle, duck, parrot, joins in the verbal exchange until even the pig's single word exclamations can hardly be heard above the din.  The frogs are getting madder and the animals are laughing louder.  Finally the elder shouts for their attention.

His suggestion fills them with fear but no other choice presents itself; a visit to the wise old beetle must be made.  Left all alone the little pig's ribbit takes on a different tone.  It's not easy with everyone speaking at once but in the end the wise old beetle suggest a return to the pond.  He needs to see this with his own eyes.

But what he and the other animals see upon their return is not what anyone expects.  What the wise old beetle suggests as he leaves never entered their minds.  They collectively glance upward, determined to correct their mistake.  Is that a "Tweet!"?


Rodrigo Folgueira has crafted the best kind of story alternating between an unseen narrator's voice and dialogue between the frogs, forest animals and the little pink pig.  He manages to convey with a few sentences the exact emotional tone and dilemma of all involved.  It is because of the conversations readers are well aware of the inherent humor; it's not everyday one sees a pig sitting in the middle of a pond saying "Ribbit!" Here is one example of the conversation around the pond that memorable morning.

"This new relative of yours is a little pink!" said the raccoon.
"He's no relation of ours!" declared the frogs.


It's a given when a bright pink pig is calmly sitting on a rock in a pond, eyes closed, uttering "Ribbit!", surrounded by aghast and disgruntled frogs, readers are going to be attracted to the title.  Solid color opening and closing endpapers are the same eye-catching hue as the misplaced porcine visitor.  With the exception of three opposing pages all of the illustrations within the book span two pages.

The background for each of the visuals is textured and layered in warm cremes, greens, blues, browns and pinks but readers are well aware of the passage of time because of the colors on the final three pages; an extraordinary sunset is closing the day.  With minimal use of lines Poly Bernatene captures the humor in the situation; the lifted eyebrows, the googly-eyed frogs, the frowning mouths, the perplexed and laughing forest animals and the intent of the little pink pig.  The shape of each animal's body, especially their faces, is full of charm and personality with a plus.

Having searched again and again online for information about Bernatene's technique and medium used in his illustrations and finding nothing, I decided to send him an email.  My Spanish is a little rusty since college (both he and Folgueira are Argentinian) but to my delight I received a response.  He says he does most of the original work, the textures by hand, then "applies" them in the computer using Photoshop.  He goes on to say the process for this project was very special as he and Rodrigo have been friends for twenty years.  It was and is very personal to them.  He continues by saying

It was almost 3 years of work between coming and going, with several changes in the development to reach to the best way to tell the story through with lot of care to keep balance within words and illustrations.


The first time I read Ribbit! with words by Rodrigo Folgueira, illustrated by Poly Bernatene, standing in my local indie bookstore, McLean & Eakin, I burst out laughing.  Without a doubt this collaboration between these two longtime friends is a magical, laughter-filled tale of the lengths taken by a friendship-seeking pig.  This is one story that must be read aloud.  It's a winner all the way.