One of many good things about having a dog choose you, is the late night walks; especially when the sky is clear and filled with starry shapes familiar and unknown.  To see and identify those constellations learned at an early age, to watch the meteor showers, to wonder at the northern lights, and see the moon in all its phases, is magical.  It's a whole new world above and beyond our planet. 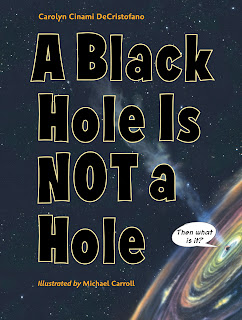 When I saw A Black Hole Is NOT a Hole (Charlesbridge Publishing, February 1, 2012) written by Carolyn Cinami DeCristofano with illustrations by Michael Carroll appear on the 2012 Nerdy Book Club Award Nominees list this past December, it caught my attention. Like so many subjects the more you know, the more fascinating they become to you; almost like miracles because the realm in which they exist is so far out of your everyday life.  This title is a seventy-four page journey into a place no one can visit.


Have you heard the news?
In outer space, mysterious entities called black holes seem up to no good.

After an upbeat, conversational introduction seven chapters with headings, Places with Pull, The Pulling Power of a Black Hole, Black-Hole Beginnings, The Blackness of Black Holes, Mission Impossible? Seeking the Invisible, Supersized Surprises, Close Encounters of the Imaginary Kind and Turning the Universe Upside-Down, inform readers on the exact facts about these very real places.  Beneath each chapter title is a single statement which is supported and explained thoroughly within the following pages.

Chapters are broken into smaller sections of discussion by additional sentences or phrases.  Interspersed among the main narrative are insets coded in orange going in-depth about a particular topic such as Fact of the Matter (an explanation of the density in the center of a black hole), An Event What? (a definition of the outer area of a black hole known as the event horizon) or Sparking a Star (the reason a star shines) to name a few.  A variety of charts and drawings ranging in size from several pages to a smaller portion of a page visualize concepts for readers.

Every single two-page display has at least one if not more visuals.  Clever small black and white sketches in the margins had humor and interest.  Spectacular full color images from astronomical institutions give readers the feeling they may be at the very least in a planetarium if not zooming through space in a ship.

The wit and meticulously researched wisdom of Carolyn Cinami DeCristofano is evident on every single page of this book.  As a reader you will be drawn into this volume from the onset not able to stop until you have absorbed all it has to offer; the language will appeal to and be understood by all of the intended audience.  Along with the black and white sketches previously mentioned are speech bubbles offering comical asides.  Here are a couple of passages from this title. (My copy looks like a porcupine; loaded with sticky notes)

In the star's center, the gas is so energized that it has become a sort of super gas, called plasma.  The hot plasma is in constant motion.  It expands like hot air inside a balloon and pushes outward from the center.  Meanwhile, the crushing weight of the star material continues to press inward.  In goes the outer material and out goes the inner.  The plasma rolls and churns like a hyper hurricane of heat, light, sound, and motion.


Breathtaking paintings rendered in acrylics by renowned illustrator, Michael Carroll elegantly enhance the text.  Color, detail, and design invite readers to step into the unknown, out of this world.  Evoking a sense of wonder, the mysterious unexplored, but staying true to the known, each articulates the essence of outer space and black holes.


Readers could not ask for a better book to introduce and expand their knowledge than A Black Hole Is NOT a Hole written by Carolyn Cinami DeCristofano with illustrations by Michael Carroll.  A time line, glossary, written and online resources, image credits and an index are listed at the back of the book.  Of special interest is the two page author's note offering readers a glimpse into her process and the importance of accurate and thorough research. Here is a link to a interview at Kirkus, Debunking Black Holes For Kids.

Here is a link to an additional NASA page on black holes. This is the link to the HubbleSite: Black Holes: Gravity's Relentless Pull.  These two recent articles on black holes look interesting: Star Orbits Black Hole At Record-Breaking Speed For X-Ray Binary System, ESA Announces and Scientists Catch A Black Hole Munching On A Giant Planet.
Posted by Xena's Mom at 7:34 AM