Without fail their very presence gives one pause.  Gliding through the air without a sound or sitting in a tree or nest like a silent sentinel, they are the essence of royalty.  With a wing span between six and eight feet, the bald eagle is one of nature's most impressive creatures. 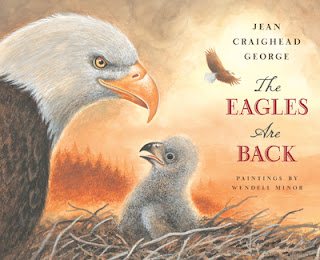 We nearly lost all this beauty.  Thankfully for now and future generations there were people who recognized the dangers; doing what they could to save this magnificent bird.  In The Eagles Are Back (Dial Books for Young Readers) written by the late Jean Craighead George with paintings by Wendell Minor, readers follow the efforts of one boy; seeing the difference a single individual can make.


Years ago a boy climbed to an eagle nest in an old tree by a remote lake.

He is worried about two adult bald eagles he has named Uncle Sam and First Lady; not having seen them for some time.  As he peers down into the nest he sees two crushed eggs.

The boy knows his friend the ranger is worried about their diminishing numbers.  The boy knows when the bald eagle was chosen as our national bird there were a half a million populating this great nation; a huge part of an ecological food chain.  Now there are only 450 pairs left.

Hunters, loss of habitat and the use of DDT (since banned) are all contributing factors.  Not having eaglets to watch this year will be strange.  Two things happen to the boy as he is leaving the forest; Uncle Sam swoops down to get a fish and his friend, the ranger, has a special treasure to show him.

Another ranger in Alaska sent him an eagle egg. He is hoping Uncle Sam and First Lady will adopt it. In order for this to work though the boy's help is necessary.  Called to duty in another park the ranger asks the boy to watch the nest.

On the third day the boy calls to them all day until the sun is setting.  Without warning they suddenly appear, flying to the nest.  The boy watches as first Uncle Sam, then First Lady take a turn sitting on the egg.  They've made the egg their own.

Waiting and watching, watching and waiting, the boy helps as he best knows how. A egg, a pair of bald eagles, two park rangers and this boy turn hope into reality, so that some day a father can bring his son to see more than thirty eagles.  The skies never looked so good.


Over the years reading the works of Jean Craighead George one can't help but fall under the spell of her words; words taking us deep into the natural world, giving us a great respect and appreciation for those creatures sharing our planet.  She informs by weaving what is known to be true into her narratives as well as inviting us to look further, igniting an interest.  In this particular title I was curious to know how close to the truth the story was, so I sent an email to her friend of twenty-two years and collaborator, Wendell Minor.

Jean Craighead George's older twin brothers, John and Frank, were the first raptor keepers in the United States, and were indeed involved in saving eagles.  "The Eagles Are Back" is based on their endeavors, but is told through the fictional character of a young boy." 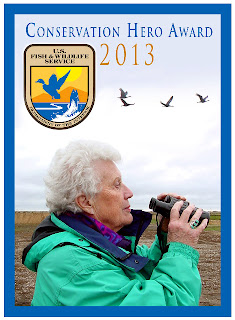 In the conversation of this email he also informed me there will be one more title released in 2014 illuminating their shared talents, Galapagos George.  He closed the email with good news just received this week about Jean Craighead George.

in rich, warm colors.  The back illustration is taken from within the body of the work; the boy is tossing a fish he caught to the eagle to feed the eaglet.  A close up of an eagle in flight spans the title page followed by the verso and dedication with a two page panoramic view of a valley overlooked by the eagle pair.

Minor alternates his painting sizes as a reflection of the text.  All of the double and single page spreads go edge to edge to give the reader a sense of wonder but also an intimacy with the story.  When text appears opposite a one page illustration a wide border is formed with a fine golden line; each of these pages featuring a smaller inset painting.  His perspective, lines, and brush strokes combine to create a living breathing texture; a truly realistic rendition.


The Eagles Are Back by Jean Craighead George with paintings by Wendell Minor portrays the importance, the beautiful unbroken chain, that was and needs to be protected and preserved.  It is meant to and can be enjoyed by all ages.  Please visit the author and illustrator websites via the links embedded in their names.

An illustrator's note on the verso explains the research process Wendell Minor used prior to beginning his paintings. There is a short bibliography of websites on bald eagles at the conclusion of the book.  Mr. Minor and his wife, Florence, were gracious enough to include two additional images in their emails which are shown below. 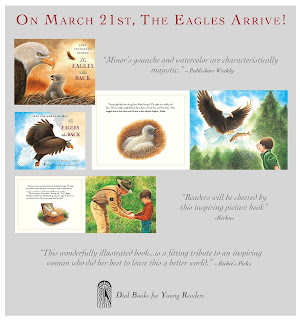 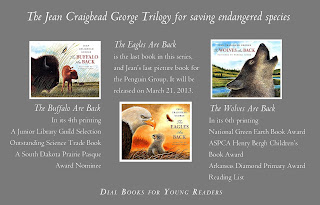