A Day On The Lake

Tucked away in a shoebox are years of memories in shades of yellow, red, white, black and silver.  In looking at them the clock turns back; I am a young girl getting ready to spend a morning or evening fishing with her Dad.  Our two heads are bent over his open tackle box as we debate the merits of one lure over the other; deciding whether to use bobbers or not. 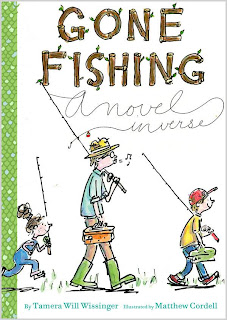 How fortunate I am to still have those lures, bobbers, and flies, tangible reminders of wonderful hours spent in the company of my Dad fishing.  Debut author Tamera Will Wissinger and illustrator Matthew Cordell, no stranger to starred reviews and placement on year's best lists (linked here are my reviews of Another Brother and hello! hello!), pair to present this poetic piece, Gone Fishing: A novel in verse (Houghton Mifflin Harcourt, March 5, 2013).  It does not matter whether you are a fisherman or fisherwoman now, in the past or perhaps, ever, this story of Sam, Lucy and their Dad will conjure up a vision of a day well spent.


In the darkness of night, Sam and his Dad collect worms for the big fishing trip the next day.  Later Sam dreams of spending time alone with his Dad but his little sister, Lucy, has other ideas.  Not only has she invaded the sanctity of his tackle box replacing his treasured compass, map, lucky fishing cap and stringer with her princess doll, and assorted paraphernalia, but the next morning she asks to go along.  And his Dad says yes. What?!

After waiting for Lucy to pack all her goodies, traveling down the road, arriving at the lake (Eureka!), launching the boat, and loading all the gear on board, they are finally speeding across the lake to the Lucky Fishing Spot.  Unfortunately not once but twice the good part of lucky seems to allude Sam and shine on Lucy instead.  It seems impossible that someone who makes so much noise, forms an attachment to a worm and sings heeere fishy, fishy, fishy could catch not one, not two, not three...but eight fish!

While Sam is rethinking his choice in sports a surprise strikes.  Too soon the day is done but all hearts are happy as the triumphant trio heads home to dinner and the telling of tales.  Twenty-four hours of near blissful perfection, minus a few unexpected glitches, shift an older brother's assessment of his pesky younger sister.


Listed in the contents are forty-one original, lively poems easily able to individually gleam but blended together they form a familial adventure glowing with a brilliance that can only come from a winning weaver of words.  Tamera Will Wissinger has written using a variety of poetic forms, (acrostic poem, cinquain, concrete poem, couplet, curse poem, free verse poem, haiku, limerick and ode, to name some) employing such techniques as alliteration, hyperbole, imagery, onomatopoeia and simile to give voice to Sam, Lucy and their Dad as the narrative unfolds.  It's the choice of words by Wissinger which gives these poems their rhythm and rhyme like the beat of an unforgettable tune beckoning readers to join in the fun.
Here are the first three verses in the first poem spoken by Sam; a Tercet Variation titled Night Crawlers.

Grass slick.
Worms thick.
Tiptoe near and grab them quick.

Hold firm.
They squirm.
Tug-o-war with earth and worm.


As soon as you see the cover you can't help but smile in anticipation of the possibilities this fishing trip will bring.  Take note of the fish scales on the spine, Lucy running in from the left, the use of twigs for the title lettering and the fishing line to form the words in the book's sub-title.  These are the detailed, distinctive artwork of illustrator Matthew Cordell created using pen and ink with watercolor.

His black and white images throughout the book enhance, elevate, animate and surround the text.  You wonder if perhaps Cordell might have a younger sister himself as he convincingly portrays all the emotions the siblings feel on their facial expressions in addition to the upbeat, caring attitude of the Dad.  Again, as we did on the cover, we see the thematic details; the words GO FISH on the license plates of the truck, the fish weathervane on top of the snack shack at the lake, and the fish picture on the wall of the family kitchen.  Some of his illustrations are one page, some extend from one page into the other and several are edge to edge on both pages, contributing to the overall pacing of each particular poem and the book as a whole.  Two of my favorites are the three peering over the edge of the boat quietly waiting for a fish to bite, eyes wide open and at the end when all three are home in the bathroom, the two children on stools on either side of their Dad, looking in the mirror as he shaves, pretending to do the same.


Gone Fishing: A novel in verse written by Tamera Will Wissinger with illustrations by Matthew Cordell is a high energy, humorous and endearing depiction of a family outing.  I predict as a read aloud listeners will beg for its non-stop continuation.  As an individual read it will be finished and promptly started over again.

At the close of the book, Wissinger gives a brief author's note before defining at length poetic techniques and forms.  She mentions which of her poems in this title demonstrate each.  Please follow the links embedded in Tamera Will Wissinger's and Matthew Cordell's names to their official web sites.
Posted by Xena's Mom at 7:52 AM