To Find Your Place

When you listen to someone speaking you know a pause usually means a thought has been completed.  By the volume of their voice you know the importance of what they are saying.  Body language, eye contact and inflection can convey a considerable amount to a listener. 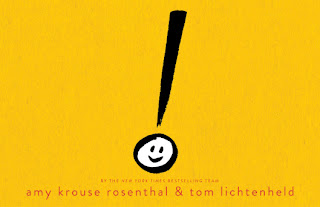 For writers word choice plays heavily in expressing their thoughts but punctuation does for the page what intonation does for the speaker.  Placement of specific types of punctuation can change the very meaning for the same set of words.  In a creative collaboration readers have come to appreciate author Amy Krouse Rosenthal's and illustrator Tom Lichtenheld's newest title, Exclamation Mark (Scholastic Press) delightfully delivers a perfect point.

He stood out from the very beginning.

Exclamation mark is in a quandary; feeling like he sticks out and up more than his period partners.  It's fine when they're all sleeping but blending in when they're awake, despite his every attempt, is not working.  He even toys with the idea of running away.

Then, when he least expects it, the answer appears in the form of a question.  The asking is being done by none other than a question mark.  Does he stop at one? Nineteen nonstop queries later our punctuation pal is feeling overwhelmed, to say the least.

He can hardly contain his excitement! He tears off to share the news with his period partners as his questioning buddy beams with pride.  Sticking out and up has never been better; finding your place is not necessarily being like everyone else.

Word choice and pacing radiate with perfection in the hands of author Amy Krouse Rosenthal.  In this story she begins with a series of simple sentences; a sense of anticipation building.  The contrast between those, the rapid-fire questions upon the new mark's arrival and the exclamation point's outburst  provide a liberal dose of humor (as does the word play).  Our character's expressed joy is contagious.      Here are a couple of sentences between the question mark and the row of periods.

There was never any question in our minds.


Without a doubt the sunny yellow jack and matching cover with the smiling face of the exclamation mark are a definite lure.  The opening and closing endpapers in a reddish, maroon resemble the texture of a composition notebook cover.  Spread across two pages, turning the book to read it vertically, is a huge exclamation mark along with the title, author and illustrator names.

Moving into the body of the book, Tom Lichtenheld has chosen to place his ink rendered punctuation personalities on the same pale creamy paper with faded blue lines used in teaching children how to form their letters.  The type used to begin the tale (when a narrator is speaking) is larger and simple.  When the two marks meet the font changes style in italics.  As the exclamation mark gains confidence in using his new skill the type size is varied and changes color with each new phrase he exclaims.

It's amazing to me how skillful Lichtenheld is conveying emotions with his circles, two dots (lines) for eyes and a line for a mouth.  With the slightest change in placement, shape and curvature a new feeling is featured.  It's his extra touches that matter too; the red and white polka-dotted bag on the end of the exclamation mark's tail top when he thinks about running away, the lines and smudges for fast motion, or the clever conversation between the two marks in miniature in the lower right-hand corner on the last page.  One of my favorite illustrations is when exclamation mark goes to show the periods his new- found ability.


Exclamation Mark by Amy Krouse Rosenthal with illustrations by Tom Lichtenheld is punctuation with pizzaz.  Choosing the title to read Exclamation Mark rather than exclamation point is another indication of the cleverness exhibited by both Rosenthal and Lichtenheld.  This is a story not about making a point but about finding your place, to make your mark.  This book has something for everyone.  I love that about it.

Please follow the links embedded in both the author and illustrator names to their official web sites.

This is a link to an interview of both Amy Krouse Rosenthal and Tom Lichtenheld at Scholastic.

Here is a link to the BrainPOP site for a page on punctuation.

John Schumacher, teacher librarian, 2011 Library Journal Movers & Shakers, member of the 2014 Newbery Committee and blogger at Watch. Connect Read. featured this title in a Book Trailer of the Week.  Check out his review and the trailer.