Regardless of the fact the calendar shows spring arrived almost a month ago, the piles of snow in my yard coupled with the forecast for wind gusts over forty-five miles per hour with more snow signifies Mother Nature is having her way.  Nevertheless, driving down one of the side streets in town the other afternoon (during Spring Break), I saw children gathered in front of one of the houses.  Industrious and hopeful they had set up a table, a pitcher filled with their beverage of choice and cups on top, with crates for seats.  A sign lettered by hand proclaimed their product and price. 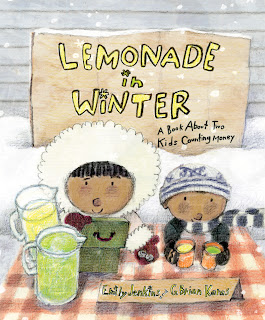 Clearly those girls and boys had caught spring fever.  Then again, when a mind gets in the mood, an idea growing and growing, spring things might happen in the middle of a snowstorm.  Author Emily Jenkins and illustrator G. Brian Karas work their combined magic to bring readers Lemonade In Winter:  A Book About Two Kids Counting Money (A Schwartz & Wade Book, September 2012) where that very thing happens.


An empty street.
Outside, a mean wind blows.
Icicles hang from the windowsills.

Pauline has an idea.  Her little brother John-John can't wait to help.  Her mom and dad are calmly skeptical.  Pauline wants to sell lemonade, limeade and lemon-limeade at a stand...outside...in the wind...and the snow.

Excited and determined the sister and brother search the house collecting quarters.  Bundled up they head to the grocery store to make their purchases.  Lining the coins up on the counter, sugar, lemons, limes and cups are bought.  Trudging back inside, happily they walk past their parents who are still calmly skeptical.

Beverages made, table set up, signs written, Pauline and John-John wait for their customers to arrive.  No one comes.  The words of their parents might be right.

Eventually not a single drop is left.  Cups sold are tallied.  Coins are counted.  Pauline starts to cry.  With the optimistic exuberance of youth, John-John has the perfect solution; one usually reserved for summer.  Satisfied smiles can be worn in any season.


Within the first two pages the enthusiasm of Pauline and John-John rises from the story and surrounds the reader.  Emily Jenkins does this with her choice of words and descriptions; skipping with her idea, run through the bitter air and shouting wildly.  Jenkins has the two focused on the fun of their venture; one or the other is suggesting ideas to keep the day positive. Her simple sentences, short phrases, the variety of customers and their friendliness toward the children keep the narrative upbeat.  The adding of the money with every transaction is seamlessly blended into the story.


I dare you to look at the matching jacket and cover of this title and not smile.  Those two children dressed in winter clothing, head to toe, selling drinks in a snowstorm is a comical contrast.  On the back snow covered, a trail of snow behind them, heads tilted, they strain to reach the counter with their purchases and coins laid out before the grocer.  Pale pastel opening and closing endpapers feature a few scattered snowflakes.

The text on the tile and verso pages is placed on signs stuck in snow.  G. Brian Karas has rendered these illustrations with brush and walnut ink on (a heavier, matte-finished) paper, colored in Photoshop, and finished in pencil.  Whites, creams, browns, grays, lemony yellows, limey greens and some rusty red, all muted, contribute to the overall warmth of the story despite the wintry season.  Alternating perspective and picture sizes makes the reader feel like a participant.  His humorous touches ( the cushions off the sofa when the children are hunting for money, the sink overflowing in the kitchen, only John-John's feet sticking out of the snow after a cartwheel) further endear readers to these two characters' endeavors.


You'll want to have plenty of lemons, limes, sugar and quarters handy after reading Lemonade In Winter: A Book About Two Kids Counting Money written by Emily Jenkins with illustrations by G. Brian Karas.  It's pure fun with numbers when readers follow these two supportive siblings.
Your neighbors might think you're crazy but this could be the ticket to surviving those unexpected winter storms.