It has been more than six years.  Actually, two thousand four hundred forty-three days have passed.  When a time period such as this feels more like yesterday than the actual number, it's a sign of enduring goodness.  For readers of books in a series, this means each book, regardless of the time between publication dates, is a treasure that stays in their collective hearts and minds. 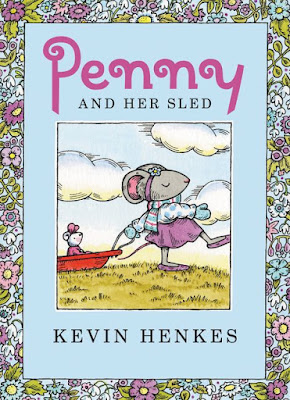 In 2012 beloved author Kevin Henkes gave readers the first book in a series about a lively, charming little girl mouse.  Penny And Her Song uplifts readers' hearts and leaves them humming a tune.  In Penny And Her Doll, an important decision is made.  Followers of the series discover in the third book, Penny And Her Marble, how this child grows and expands those personality traits we find irresistible.  On October 29, 2019 Penny And Her Sled (Greenwillow Books, an imprint of HarperCollinsPublishers) cheerfully entered the children's literature realm.

It was winter,
but there was no snow yet.

If there was snow, Penny could use her new red sled.  She moved from room to room looking out the windows hoping for snow.  She looked skyward to and from school.  Penny asked her parents when it would snow.  Soon was their reply.  She asked her tiny baby siblings and her doll Rose if they wanted snow.  Penny wanted snow.  It did not snow.

Penny tried wearing winter clothing and sitting on her sled inside to encourage the snow to fall.  Weeks passed with no snow.  Penny did other winter activities with her parents.  Against the wall in her bedroom, she believed the sled looked sad.  It still did not snow.

Without snow, Penny decided to use her new red sled for other things. (Penny is a resourceful, imaginative child.)  Her sled became a bridge, a house and a bed.  The bed idea did not work so well; it was lonely without Rose sleeping with her.  Over time Penny went from playing with the sled every day to putting it back in the corner of her bedroom, completely untouched.

Eventually Mother Nature started to signal the end of winter.  Penny was no longer interested in waiting for winter's white mantle.  After a conversation with her mother, it was decided she would wait for another kind of snow.  Outside her mother showed her where to look for this other type of snow.  Penny watched and waited and watched and waited until one day her mother's words came true.  Before she could show her mother this new arrival, she did something which made her mother laugh.  You will laugh, too.


Each time a book penned by Kevin Henkes is read, readers can't help but marvel at his masterful skill in word choices, sentence structures and realistic conversations between his characters.  He knows exactly what his intended audience needs.  Frequently Kevin Henkes will repeat a series of words in more than one sentence to supply a gentle cadence.  Dialogue is inserted to provide a more participatory and intimate experience for readers.

Kevin Henkes is mindful of his readers' abilities to read increasing.  In this book there are five chapters not only covering days but weeks.  We are a part of Penny's world from one season into the next season.  Here is a passage.

That night Penny dreamed
it was snowing.
The snowflakes in her dream
were as big and fat
as marshmallows.
Penny ate the snowflakes
with a fork.

When she woke up
there was no snow.
Penny hugged Rose.

"I do not think
it will ever snow," she said.


The use of pastel colors, first seen on the open and matching dust jacket and book case, draws readers immediately into the delightful world of Penny, her parents, her siblings and her doll, Rose.  The floral border is present in all the books.  Each border is a reflection of the interior color palette and the hue used around the introductory square image of Penny on the front of the jacket and case.

To the left, on the back, on the pale sky-blue canvas is a smaller picture bordered by a fine black line.  On white, we see Penny's mittens and scarf, as if placed in a spot ready to use.  This is a hint of a special moment.

A darker rose shade covers the opening and closing endpapers.  Between the text on the title page is an illustration of Penny hugging her new red sled.  Her eyes are closed in contentment as they are on the front of the jacket and case.  The mittens and scarf are shown again beneath the dedication page opposite the verso.

The chapter headings are colored in the same dark rose shade as the endpapers.  To indicate the passage of time Penny's outfits are varied.  She is always wearing her signature headband.  Kevin Henkes shifts his image sizes; two to a page as rectangles, a square on a single page, two to a page as loosely framed ovals or other shapes, a single image with large scalloped edges or a rectangle on a single page.  To show several activities in one day, three rectangular pictures are placed on a page.  This technique is employed again with an increased number of smaller illustrations on one page.

The facial expressions, body postures and clothing worn by all the characters further connect us to this memorable little girl mouse and her family.  Careful readers will notice all the delicate details, the wallpaper in the family's home, the pattern on her bedspread and the pictures she has drawn and hung on her bedroom wall.  Penny is wishing for snow in everything she does.

One of my many, many favorite pictures is a square framed by a fine, black line on a single page.  Penny is wearing her polka-dot nightgown and her purple headband.  She is cuddling Rose, placing her over her right shoulder.  She is standing in front of her bedroom window looking out at the starry sky, pretending the stars are snowflakes.  There is a golden glow added to the curtains, perhaps from a small lamp in her room.


If Penny And Her Sled written and illustrated by Kevin Henkes is the first title you've read in this series, you'll not only read this one repeatedly but the three precious, previous books as well.  You can't help but want to cuddle these characters as much as Penny cuddles her doll Rose.  As an early reader, this book and the other titles are an excellent choice.  I highly recommend this newest title.

To discover more about Kevin Henkes and his other work, please follow the link attached to his name to access his website.  There are numerous activities and resources for his books on his website.  At the publisher's website you can view several interior pages including the page with one of my favorite illustrations.
Posted by Xena's Mom at 1:30 PM