What we humans may see as an odd habit in our canine companions, they consider a part of their job.  I think. In addition to enjoying television and frequently sleeping on her back with all four legs extended, another quirk Mulan displayed immediately was stopping in the middle of a walk to contemplate the universe.  To see this in a puppy not yet three months old was hilarious and a little bit frustrating. Our daily walks were (still are) filled with more than a few stops.

Her routine now consists of stopping and sitting to scan the area in front of and along the bottom of the hill in front of the house as soon as we walk out the door.  We make it halfway down the slope of the driveway and she stops again. Halfway through the walk, after we turn around to return home, she stops at the top of two hills and looks across the street, head lifted and sniffing the air.  She is either trying to tell me to slow down or there’s something that needs my attention.

For this reason, I am happy to host the cover reveal of Lisa Rogers’ second picture book, Hound Won’t Go. The title and first lines for this book came to her in a flash while walking with her pooch pal one day.  I’ll let Lisa tell you this truthful tail . . . err tale.

It’s a pleasure to have you here today at Librarian’s Quest, Lisa.

I was wondering if you would first share with readers how your dog came to live with you and your family, the breed of your dog, your dog’s name and for how long he’s made his home with you.

We brought Tucker into our home after our beloved Dalmatian, Sparky, died. Sparky was our first dog, our daughter considered him her brother, and we treated him royally. We were crushed. But we could not live without a dog to love. We returned to the rescue where we had adopted Sparky and saw this long-legged, goofy, adorable pup, named Bandit 1 (or Bandit 2, I can’t remember). We thought he was a mix, but the shelter told us he was a Treeing Walker Coonhound--think Giant Beagle. I saw videos of these athletic pups climbing 8-foot fences and thought, uh-oh! That was 12 years ago and it’s been an adventure!

Would you please tell readers the particular habit Tucker has that inspired this book?

Most people try to get their dogs to stop. Not Tucker. From the moment we brought him home, we had trouble getting to go--move forward, that is! We call it the Plop O’Doom because he melts into the ground and, at 90+ pounds,  is unmovable. He wants to go where he wants to go, and we pretty much have learned to hang on for the ride.

Does Tucker have any other interesting characteristics readers might enjoy?

Though we changed it, Bandit was an appropriate name for him. He’s fast and stealthy and can swipe a stuffed animal from beneath a sleeping baby without the baby even waking up. It’s happened. Besides the Plop O’Doom, he varies his walking route every other day. One day, he’ll turn right going down our hill to do a woods walk; the next, he’ll turn left for a neighborhood stroll (also good for napping on strangers’ lawns). But he absolutely, never, under any circumstances, goes for a walk after 4 pm unless we take him by car to a favorite place. I have videos to prove it.

They say that dogs mirror some of the personality traits of their humans.  Is this true with Tucker? Is anyone in your family like him?

Stubborn yet even-tempered: my husband. Focused and smart: our daughter. He’s always planning ahead, like me. And we’re all writers, like him. He diligently chronicled his adventures in his blog, Dreams du Dog, until I took over the laptop to focus on my own writing, though he does steal it now and again.

When we walk in our town, no matter where we start, he brings me first to the bookstore, where he gets treats and lots of attention; next, the dog store, where he always manages to cause a ruckus, such as scattering chicken feet all over or grabbing expensive treats and chomping them in seconds. It’s a fun time. By then I’m ready to pack it in, but he drags me another mile or two, and then he hangs out at a brook where he gets in up to his belly and takes a good long drink. Several minutes’ worth.

Hunting hounds like Tucker (not that he has ever hunted) sleep most of the time and are ready to be up and at ‘em when called. So he curls up on our guest bed, one long ear hanging over the side. Half the time we don’t know where he is because he’s so quiet; the other half he’s outside baying at marauding chipmunks.

Would you give us a hint at the writing style used in this book and how or why you decided on it?

As Tucker and I were walking in a crosswalk, I remembered all the times he has plopped, and I thought: “Uh oh. Hound won’t go.”  It made me laugh. The rhythm matched the pace of our walk. I wrote the text in a simple, straightforward, spare way. Because really, that’s the way it is: Hound won’t go, and that is that. Until...

Where is your favorite place to write?

The best place is in my mind while I’m walking, running, or kayaking on the pond near our home. It feels most organic to me. When I must sit down, my favorite place is outside on our patio with the flowers and hummingbirds. It’s quiet and I can hear my story in my mind.

Did you have any exchanges, written or verbal, with illustrator Meg Ishihara about the cover for Hound Won’t Go?

No, but Meg has created an adorable Hound! It’s so great that she’s captured Tucker’s--I mean Hound’s--personality and sense of fun. He’s mischievous but lovable and has a sweet bond with his owner, and that comes through beautifully in her illustrations.

If you had to pick one single thing about the cover you like the most, what is it?

From the expression that Meg gives Hound, it’s clear that he’s perfectly comfortable where he is and that he has no intention of going anywhere. It’s spot on, and I laugh every time I see it.

Here’s to dogs with minds of their own, who stop for reasons unknown.

Here’s the cover of Hound Won’t Go to be released in April 2020 by Albert Whitman & Co. 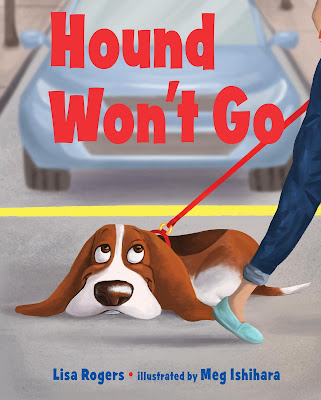 I want to thank Lisa Rogers for visiting Librarian’s Quest today to satisfy our curiosity about her new book, her dog Tucker and a little bit about herself. 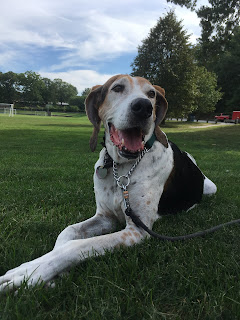 Lisa Rogers was inspired to write children’s books through her career as an elementary school librarian. She lives with her family outside of Boston, where Tucker makes them laugh and takes them for long walks every day.