Parents, caregivers and educators have sure knowledge of the passion and persistence children employ when they are in pursuit of a plan.  Once they get an idea in their minds, it usually takes an epic force to impede any progress.  Their desire for success is so strong, that if at first they don't succeed, they will most definitely try again. 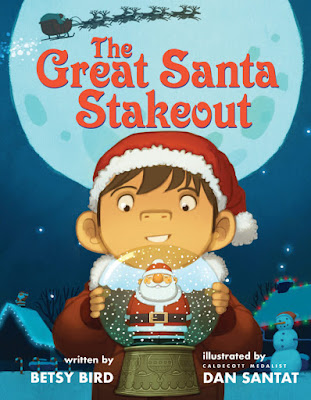 Defeat is not an option.  Brainstorming a new scheme to obtain a desired goal is the only course of action.  The Great Santa Stakeout (Arthur A. Levine Books, an imprint of Scholastic Inc., September 3, 2019) written by Betsy Bird with illustrations by Dan Santat is a light-hearted, humorous look at a boy who lives and dreams 24/7 all things Santa Claus. This year he is on a very specific quest.

Every celebration throughout the year was an opportunity to dress up as Santa spreading Christmas cheer.  In his immense collection of Santa memorabilia which did include Santa underwear, Freddy Melcher lacked one thing, one very important thing.  He didn't have a picture with Santa after he came down the chimney.  He must have this photograph.  Nothing else would suffice to fill this gap in his gathered items.

In order to accomplish this mission, Freddy had to use every ounce of stealth and cunning he possessed.  This would be no easy task because Santa knows everything.  There were four steps to Freddy's objective.  He plotted and practiced all year long.

On Christmas Eve, no one knew about the four portions of his project he had in place.  What Freddy did not anticipate was failing with the final step.  He fell asleep.

Freddy was horrified by what he saw outside his window.  He could not get through the front door fast enough.  In the pile of what was left of step one of his master scheme was a note.  A range of emotions pulsed through Freddy's heart and mind.  The last line of the story sums up exactly what Freddy (and any other child chasing a dream) feels.  Hooray for those of indomitable spirit!


With a skill born of years working with children and children's literature, master librarian Betsy Bird pens a tale in tribute of children and their joyful spirit in pursing an adventure.  After the first statement, subsequent sentences offer support but it's her descriptions which elevate every portion of this story.  Freddy just doesn't want a picture with Santa, he wants one

with Santa, fresh out of the chimney.

Known phrases of this holiday are adeptly woven into the narrative.  Only someone with the heart of a child could conjure up the four steps of Freddy's undertaking. Reader's will sense the gentle rhythm with the use of alliteration and the technique of storytelling three supplied when Freddy is trying to reach a conclusion.  Here is a passage.


When you unfold the dust jacket, the happiness of a snow-covered Christmas scene unfolds before your eyes.  Placing the decorated homes at night in the background provides the intended focus to shift to Freddy, in his Santa clothes, gazing with wonder into the Santa snow globe.  Readers will be entranced by the silhouette of Santa and his reindeer crossing the full moon.  (I really like the corresponding circle of the snow globe and the moon.) Illustrator artist Dan Santat already reveals his attention to detail in this setting with the word NOEL on one of the roofs and candy canes along the peak, glittering strings of lights, Santa on another roof and a smiling snowman in another yard.  Spot varnish on the lights gives the appearance of twinkling when the jacket is moved in the light.  Santa, his sleigh and reindeer and his magical dust along with the snow globe and text are varnished.  The title text is in red foil.

The book case is covered in green plaid wrapping paper.  Rows of Santa faces provide an additional pattern.  Crossed wide red ribbon is shown on the front and back.

On the opening and closing endpapers readers are given a close-up glimpse of OPERATION SANTA SELFIE-01 and OPERATION SANTA SELFIE-02 (next year) blueprints on Freddy's desk with a desk lamp providing illumination.  His drawings are labeled with the steps and speech bubbles.  In the lower, right-hand corner as if it's genuine, the caption reads

Dan Santat's pictorial vision begins on the title page with a double-page image of Freddy, in his Santa clothing, working at his desk.  A Santa mug holds his drawing supplies.  The only light comes from the lamp.  The next double-page picture crosses the gutter into the verso and dedication pages on the left and we read the first sentence on the right.  It's a close-up of a grinning Freddy in his Santa attire.

with ink, watercolor, and Adobe Photoshop

spans two pages or a full page to enhance the pacing.  Readers will pause at every page turn to notice the Santa elements in each scene, especially in Freddy's bedroom with his collection.  They will burst out laughing at the bus stop when Freddy appears in full Santa dress with a beard and green backpack on Talk Like a Pirate Day.  All the other students are dressed like a captain and crew straight off a pirate ship.  Without a doubt it's the expressions on the faces of Freddy and the other characters which heighten the emotional impact of the story.  Dan Santat uses light and shadow and shifts in perspective to great effect.

One of my many, many favorite illustrations, in addition to those previously mentioned, is a two-page picture.  It is Christmas Eve.  The only light in the setting comes from the open doorway to Freddy's bedroom.  His smiling parents are standing there looking at him.  In the darkness to the left and right of the doorway we can faintly see portions of Freddy's collection of Santa items.  In the front and larger than life is Freddy lying with his back to his parents and facing readers.  His eyes are wide open.  There is a faint smile on his face.  He is wearing green snowflake pajamas and a red snowflake blanket covers him.  This image is overflowing with anticipation . . . and something else, too.


You'll want to add The Great Santa Stakeout written by Betsy Bird with illustrations by Dan Santat to your professional and personal collections as fast as possible.  It's a hilarious look at the love of a child for Santa.  You'll find yourself cheering for Freddy Melcher and his efforts.  This is pure Christmas merriment.

To discover more about Betsy Bird and Dan Santat and their other work, please follow the links attached to their names to access the respective websites.  Betsy Bird has accounts on Instagram and Twitter.  Dan Santat has accounts on Instagram and Twitter.  The cover reveal and interview and book trailer premiere are found on Betsy Bird's blog at School Library Journal, A Fuse #8 Production.  Interior images and activities can be found at the publisher's website.
Posted by Xena's Mom at 3:58 PM