To Go With The Flow

When you wander along its boundaries or cross over it in a vehicle, it's a partial point of view.  When you walk along or live near its edge, your vision is a bit clearer.  Your perspective shifts entirely when you sit in a canoe or a raft upon it.  As you quietly paddle or quickly ride the rapids on a river, depending on the width or how close you are to the banks, you can see everything as if you are a part of it, instead of a stranger.  You are now intimately connected to this body of water and all its inhabitants.  For this reason, you now need to heighten your sensory perceptions and skills you would not normally need. 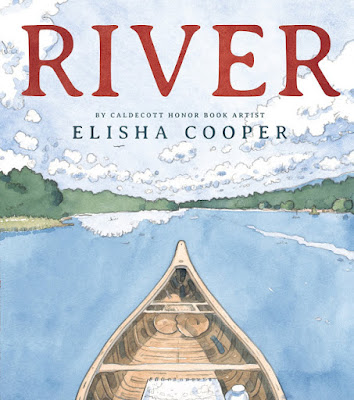 This is the way, I have learned, nature works.  We are stunned by both its beauty and its danger.  It's always a challenge but the rewards are etched in our memories for the rest of our lives.  River (Orchard Books, an imprint of Scholastic, October 1, 2019) written and illustrated by Elisha Cooper is a breathtaking portrait of one woman's adventure as she canoes down the Hudson River.

Morning, a mountain lake.  A traveler, a canoe.  As she paddles out into the blustery middle of the lake, she turns for a last wave to the shore behind her.  Her journey begins.

We learn her voyage, as she travels alone, covers three hundred miles before she reaches home.  At first, entering the river from the lake, the water level is very low.  Sometimes she is walking and towing the canoe.  It is laden with appropriate supplies for her survival.  One rock in the shallow water is not a rock at all.  She and a moose exchange curious glances.

On this first day she hears thunder.  It is not a storm but a series of rapids. She and the canoe survive.  After a night under a starry sky, she awakens and spends the day passing from civilization to the wilds and back to civilization again.

In the following days she struggles to carry the canoe and her supplies around a dam, she battles hordes of insects, she descends a waterfall through a series of locks and arrives at a town.  She buys more supplies, postcards and replaces her hat lost at the rapids.  That night she finds an island to make camp.  Soon the hours between sunrise and sunset become a series of moving over the water, drawing in her sketchbook, eating, resting and camping at night.  She is changing; becoming hardened, cautious and vigilant.

A too-close encounter with a tugboat and an unexpected squall place her in grave danger.  At long last the landscape on either side of the river is familiar and leads to an individual whose hands have determined her safety.  With a meeting completed the river she followed on this personal passage leads her to an ocean, to a lighthouse and a sandy shore full of welcome.


In the writing of this woman's travels, as an author Elisha Cooper chooses spare melodious text.  He creates vivid moments of the wife and mother's actions and reactions.

She takes a deep breath and pulls her paddle through the cold water.

His selection of descriptive words, adjectives and verbs, composes eloquent landscapes, intense circumstances and the calm of solitude and reflection.

The moon climbs up among the stars.  She is alone, but not.  The river stays beside her, mumbling to her and to itself all through the night.

Clouds roll over mountains and the river runs through the mountains, between earth and sun.  The river is broad here.  She hugs the shore.  The land passes by, mile after mile, as she guides the canoe south past apple orchards, hilltop houses, and industrial plants.


For canoeists the front of the dust jacket is a well-known and beloved sight.  Often, depending on the time of day and time of year, it is you alone with the river and the vista spreading on either side and in front of you.  Elisha Cooper paints the serenity of seeing water, woodlands, blue sky and clouds from the seat of a canoe masterfully.  His signature artistic style welcomes readers into this scene and into this book.

To the left, on the back, he features the woman paddling the canoe past a cityscape many will recognize.  Above the buildings in the cloud-filled sky is a list of four of Elisha Cooper's books with commentary from starred professional reviews.  The spine color is taken from the title text on the front.

The book case is a study in the research conducted by Elisha Cooper, showcasing sketches of scenery beside actual photographs.  There are tiny images of animals, items from the family's home, and completed color thumbnails, as well as color studies.

On the opening and closing endpapers are a pattern of continued color studies with tiny sketches contained in a column on the far left of the first and on the far right of the second set.  A single rusty red line separates these columns from maps of the Hudson River area.  The first map brings readers closer to the area revealing states, Lake Ontario, Lake Champlain, the Atlantic Ocean and the Hudson River; all of which are labeled.  The second map is from a larger perspective with captions of places and wonders seen and experienced along the route the woman followed.

The pictorial story begins on the verso.  Here, in the kitchen, the woman is showing her route on a map to one of her children.  The other child is playing with the family dog. (I think the dog looks like the main character in Elisha Cooper's Homer.  It is one of my top ten favorite dog picture books of all time.)  The husband (and father) is placing the canoe on top of the car.  It is 8:20 a.m.  Steam rises from a tea kettle.

On the title page a single canoe paddle is shown beneath the text.  Each illustration in this book is a thoughtful portrait of a meaningful moment.  Some are placed on a single page framed in white space.  Others span two pages in a glorious display of nature and the woman in her canoe, small in comparison.  At times there are groups of larger illustrations on two pages; sometimes one crossing the gutter beautifully.

To indicate the passage of time in close succession, several small pictures are shown together.  The depiction of her fighting the effects of the squall is amazing! Small drawings and paintings of animals and plants are interspersed with text and larger images.  It's like we are reading a journal or being given a glimpse of her sketchbook.

Above the author's note is the same setting as on the verso, the family kitchen.  It is now 8:20 p.m.  All the family members are gathered in the kitchen.  The woman has her open sketchbook and is speaking with the older child.  The youngest child is opening a gift of a toy canoe.  The dog has claimed the woman's small piece of collected driftwood in the shape of a fish.  The father's (and husband's) eyes appeared closed.  Why do you think this is so?

One of my many, many favorite illustrations is a combination of pictures.  Beginning near the top of the upper, left hand corner of the left page and extending to the center of the right page is a landscape scene with the river and its rapids cutting through rocks and a rough green terrain with clouds hanging above it.  The woman is battling the rapids while trying to stay inside the canoe.  There is a single sentence and a single word above this visual.  Beneath it is more text on the left and on the right.  Five small pictures between the two pages show close-ups of the woman in the rapids.


Whether you've canoed on a river, dreamed of canoeing on a river, crave adventure or favor storytelling at its best, The River written and illustrated by Elisha Cooper is a powerful presentation.  An Author's Note, A Note on the Hudson River and Sources and Reading are included at the close of this title.  I can't imagine a professional or personal book collection without this in it.  I highly recommend River.

To discover more about Elisha Cooper and his other work, please follow the link attached to his name to access his website.  Elisha Cooper has an account on Instagram.  Elisha Cooper visits with John Schumacher, Scholastic's Ambassador of School Libraries, at his site, Watch. Connect. Read.  At The Horn Book Elisha Cooper talks with Roger Sutton about River.  On October 10, 2019 author, reviewer and blogger, Julie Danielson, showcases this book on her blog, Seven Impossible Things Before Breakfast.  There is a lot of artwork as Elisha Cooper talks about the book case.  At Scholastic, Canada, there is a view of the first double-page picture.  Please enjoy these two videos.