In 2015 at the University of Worcester, Worcester, United Kingdom, the illustration department founded the International Centre for the Picture Book in Society. It's purpose

provides a focus with the making and study of the picture book in its broadest sense (children's books, comics, hand-made books, zines and educational books, e-book, graphic novel).  Its interests extend to engage with 'society' in its broadest terms by promoting multi-culturalism, inclusivity of all minorities and socially disenfranchised people.

An invitation in 2017 was sent to illustrators around the world asking them to send in a postcard with a picture of a bird on it.

The illustrators were also encouraged to include words or a message reflecting the theme of migrations.  This exhibit was displayed in Bratislava, Slovakia from September 7, 2017 to October 29, 2017. 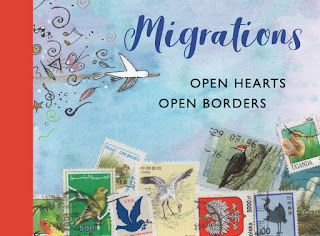 More than three hundred illustrators from five continents in countries shown on this map responded.  Of those respondents fifty-three were selected from the initial display to become a part of Migrations: Open Hearts, Open Borders: The Power of Human Migration and the Way That Walls and Bans Are No Match for Bravery and Hope (Candlewick Studio, an imprint of Candlewick Press, October 8, 2019) edited by the International Centre for the Picture Book in Society.  This book is an exploration of and a journey into the human soul.  It's an expression of honoring all people's endeavors to be free to live their fullest lives.

Prior to the introduction by Shaun Tan the work of five illustrators is shown and noted.  The remaining artists' work is divided into chapters titled Departures, Long Journey, Arrivals and Hope For The Future.  Of those featured people and their postcards you will find work of illustrators you know and those new to you.  You will find yourself pausing on every page turn to study the postcards, the stamps and messages.  The messages are written again on a page opposite the image.

In one an origami bird is folded and taking flight on a partial blue paper ripped to shown an older post card underneath. (Shaun Tan, Australia)  From Jon Klassen, Canada/USA, a single sparrow, enlarged, is shown.   Another artist, Rhian Wyn Harrison, UK, places an egret on a map with the words no egrets.  Her message reads:

In the end
we only regret
the chances we
didn't take.
It begins with
a single step . . .

Yuval Zommer, UK, places three birds in his signature style among clouds and rain flying over mountains.  He says:

Beyond the clouds, rain and mountains . . .

Several illustrators, Patricia Gonzalez Palacios, Chile, Leila Ajiri, Germany and Maria Leon, Spain, (to name a few) include words of cheer asking the travelers to be safe.  Their birds wear a hat and carry a suitcase, appear as a flying fish with other flying fish showcased on the first's wings and as a lone swallow in blue on blue with spot and outline color of white.  Nicola Davies, UK, places an albatross on a swirl of green and brown shapes like tiles.  Her words read:

The albatross holds in its eye the storm
And, over more miles than lie between us and the moon,
The small green island of its home.

For Arrivals birds appear in brush strokes of primary colors (Natalia Gurovich, Chile/Mexico), in a limited color palette of reds and teal (Judith Drews, Germany) or as kites flown by children (Myungae Lee, South Korea).  A poem penned by P. J. Lynch, Ireland, speaks of a wish many hold in their hearts.  His lone bird soars over an ocean and along a rock strewn shore.

Opposite the fourth and final section a brightly colored parrot flies among words by Mies van Hout, Netherlands.  Her words express a desire for all children everywhere.  Isol, Argentina, shows a child sleeping and riding on top of a bird with words on the image life is movement.  A large red bird, walking among a darkened landscape with stars and a crescent moon is beneath several bird cages with opened doors on a purple night sky.  Maral Sassouni, USA, has written:

One day it will be better.
Stay strong.
You are welcome.

Jane Ray, UK, closes the book with an Emily Dickinson poem opposite her large multicolored bird.  The poem defines hope.


One of my many, many favorite illustrations is under the Long Journey chapter heading.  It is by Satoko Watanabe, Japan.  Opposite the message is a picture of a bear facing the gutter.  The bear has a rather large nose perfect for a tiny blue bird with yellow wings to rest upon it.  This image is soft with fine lines and delicate details.


This book, Migrations: Open Hearts, Open Borders: The Power of Human Migration and the Way That Walls and Bans Are No Match for Bravery and Hope, edited by the International Centre for the Picture Book in Society is, in a word, beautiful.  It will promote countless discussions for readers of all ages.  You look at each image and wonder about every choice made by the artists.  This is an excellent choice for studying illustrative techniques and illustrators, countries around the world, and migrations by all forms of life, but especially those taken by people everywhere.  Wouldn't it be wonderful to have children draw their own birds and send them off to children in another community near them or far away?  I highly recommend this book for your personal and professional collections.

I have attempted to link pertinent websites to the names of the illustrators mentioned in this post.  I hope you find their other work as fascinating as I have.  Here is a link to the publisher's website and Penguin Random House so you can view multiple interior images. Here are two more links about the exhibit here and here.  Here is an article in The Guardian about the Migrations project including images.
Posted by Xena's Mom at 10:31 PM