Across Time, Country And Culture 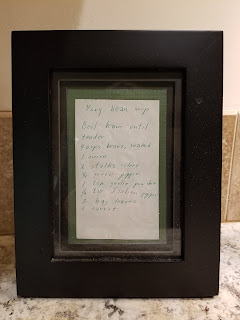 It's sitting on my kitchen counter, framed.  It's on a single piece of note paper. (He always kept a pad ready to use with a pencil or pen nearby.)  It's a handwritten recipe for navy bean soup penned by my dad in his signature style of writing.  He made his letter "a" differently than we were taught in school, as an architect or engineer might.  It's probably from watching his father, an engineer, work.

Next to me as I write this post are two of my mom's go-to cookbooks, Better Homes and Gardens Cook Book: Every Recipe Tested in Better Homes & Gardens' Tasting-Test Kitchen (November, 1946) and The Joy Of Cooking (1953).  To be honest, of the two, my dad was more comfortable in the kitchen, but for every meal, daily or for the holidays, each had their specialties to make.  We always knew certain foods would be prepared in a certain manner and our mouths watered in anticipation.  Eventually we were allowed to help and that, too, was a highly desired milestone. 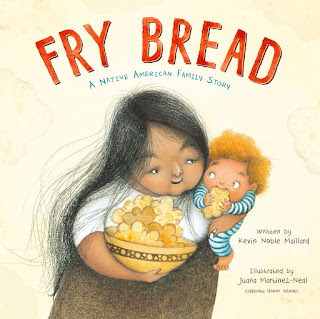 Holding Fry Bread: A Native American Family Story (Roaring Brook Press, October 22, 2019) written by Kevin Noble Maillard with illustrations by Juana Martinez-Neal for the first time was believing I was about to step into a tale of tradition based on family and food.  I knew it would be an emotional experience and it was.  It was poignant for two reasons.  It stirred up wonderful memories of my own, of specific recipes and family gatherings.  I know, too, there will be numerous others who will see themselves and their families in this book and this fills my heart with infinite happiness

In this deeply intimate, poetic book with luminous images, thirteen declarations are written about fry bread.  For each of the first twelve there follows four or five descriptive phrases inviting readers into moments stored in collective hearts and minds.  Within these forty-eight pages, including the opening and closing endpapers, a transformative journey awaits all readers.

For making this food all the ingredients are blended in a large bowl.  Depending on the cook and the cook's helpers, the dough is formed into a variety of shapes and sizes.  When this dough is carefully dropped into hot oil the noise is like hearing a friend's voice.

The shades of fry bread are an assortment of those associated with comfort, security and natural truths.  The other foods served with fry bread are dictated by family favorites.  Fry bread means time taken to enjoy each day.  It brings people together to share other forms of creativity manifested in their arts.

Fry bread is a way to enter into meaningful conversations about Native American history and forced relocation into unknown lands without ingredients for making customary meals.  This bread is consumed beyond the lines of cities, states and countries.  It is eaten by many wherever their homes are.

All the known names of Native American tribes within the United States are celebrated in this statement:

In this meaning it becomes everything, then and now.  It is everyone, then and especially now.  It represents resilience. When readers look in the mirror, they will understand the final declaration, a single sentence.


There is strength in the words meticulously chosen by debut author Kevin Noble Maillard.  Each of the phrases combine to form an essential awareness about each declaration.  They act as defining support.  Here is one of the declarations with the four phrases.


On the front of the dust jacket, the curve of the elder's arm around the bowl brimming with fry bread and the other arm holding the youngest child supplies us with a circle representing generations of familial traditions.  The look shared by the duo is one of affection.  Faint shapes similar to fry bread are placed on the background.  The background continues over the spine to the left, the back, of the jacket.  There are spots on the canvas signifying the splatters of oil from the cooking.  Centered on the back are three generations of family, grandparents, parents, six children, one dog and a small cat.  Several of the children are holding fry bread.  The youngest is still chewing on a piece.

On the book case an image spans across both sides.  A speckled blue cloth, like the sky for the declaration

covers most of the right side and nearly a half of the left.  On this cloth is fry bread in multiple shapes, sizes and colors.  Off to the left two hands are holding a cup of Te de manzamilla.  The sleeves on their top are pale blue with white scrolled stitching.  Six different hands are reaching for the fry bread on the table, young and older.  A fork and knife are on the cloth.

On the opening and closing endpapers is a listing, a tribute to,

the Indigenous nations and communities within the United States. . . .
This list also includes groups who were not successful in their attempts to achieve official status with the U. S. or state governments, like the Duwamish or the Little Shell Chippewa.

On the verso and title pages artist Juana Martinez-Neal begins with a double-page picture of the elder woman leaning forward and carrying a plate of fry bread.  Behind her on the left (her body begins on the left, crosses the gutter and continues on the right), the publication information is shown in what could be a recipe taped to the wall.  Both dedications are taped on hanging cooking pans.

were done in acrylics, colored pencils, and graphite on hand-textured paper.

Each page turn reveals a double-page image, a visual interpretation of words, extending and enhancing their meaning.  All the people featured are Native American with different physical characteristics, a reflection of the truth.  In the first illustration all five of the young children are happily following the grandmother, each carrying an ingredient.  The grandmother carries a bowl and the baby.  For the next picture, Juana Martinez-Neal shifts the perspective showing a table covered in ingredients, cooking utensils, hands shaping dough, and the large bowl with the elder stirring.

In each illustration the expressions on the children, the adults and the elders mirror their emotional state with perfection.  Many elements from Native America culture are included.  A portrait of an important woman is shown several times.  You'll go back and look at the pictures and study each one for the work of art it is.

For one of my many, many favorite pictures we are in the kitchen with a row of pots hanging from the top of the pages.  A counter spans from page edge to page edge.  On the counter is an assortment of food; beans, tomatoes, leaf lettuce, cut-up small corn cobs, a jar of sorghum, honey and cherry jam, and grated cheese to name some of them.  The children are lined up along the counter; their faces a mixture of excitement, bliss at the tastes to come and calm.  The father carries a plate of fry bread in front of them and partially off the right side.


This book, Fry Bread written by Kevin Noble Maillard with illustrations by Juana Martinez-Neal, is a masterpiece.  Kevin Nobel Maillard's Author's Note is nearly eight pages of detailed explanations about each of the declarations.  Items in the illustrations are explained as well.  This is an outstanding addition.  On the final page of text are three references and a list of fifteen notes.  Prior to his Author's Note Kevin Noble Maillard shares his recipe for fry bread.  The illustration shown on the back of the dust jacket is enlarged and opposite this page.  This is an essential title for all professional and personal book collections.  It is an honor to have read this work.