One day in the middle of August my canine companion refused to go out in the backyard in broad daylight.  Inside she paced and would not rest.  A quick conversation with a nearby neighbor confirmed their dog was pacing and barking.  This lasted for two hours. A call to the Department of Natural Resources revealed the distinct possibility of a browsing bear.  A wildlife biologist sent pamphlets and they were distributed.  Did neighbors take down their bird feeders?  Did the neighbors who leave their garbage carts out 24/7 put them in their garages?

A few weeks later when walking with my dog, a bear cub crossed the road about a half a block in front of us.  I did not say a word to anyone, certain in my mind no one would believe me.  Today I received a call from another neighbor, who knows I walk a lot each day, warning me of spotting a bear cub in the same vicinity.  Another call to the DNR resulted in receiving explicit instructions to remove bird feeders and garbage carts.  After a door to door canvas, we will see how people respond. 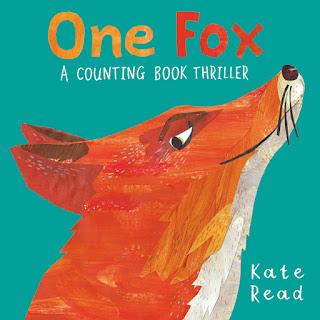 The truth is hungry animals in the wild, already encroached upon by an increasing population of humans, will seek the readiest food supply.  They have a keen sense of smell.  They have remarkable memories.  And they are clever.  This is how they survive.  One Fox: A Counting Book Thriller (Peachtree Publishing Company Inc., October 1, 2019) written and illustrated by Kate Read is about a wily predator who, as the suspense builds, gravely misjudges his prey.  This is how they survive.

One number at a time this cunning stalker moves closer to its meal.  In its sights are three chickens intent on devouring three juicy worms.  They are oblivious to the lurking danger.

The fox moves with stealth one paw at a time.  The now roosting hens snooze.  Nestled near them are more than four eggs but less than six.

The moon is high in a black nighttime sky.  The fox is right outside the chicken coop.  He's ready to make his move but first politeness takes precedence.

Inside the henhouse it's darker than beneath the black nighttime sky except for the whites of four sets of eyes.  YIKES!  A frantic fracas ensues.  What has happened to the three hens?  More importantly, readers, you should be wondering about the


Every suspenseful moment is presented in three word phrases except for a pause and the stunning surprise by author Kate Read in her debut picture book.  The use of alliteration and rhyming words astutely fashion a gentle beat.  By meticulous blending of story and counting readers, the intended audience and others, will be engaged and participating in the tale.


On the open and matching dust jacket and book case the fox is displayed in all its sly glory.  The folds in its fur, the direction of its ears, the eye looking at readers, the slight lines for its mouth and whiskers give us an up-close and personal view.  The title text takes its color from the fox's fur.  To the left, on the back, continuing with the same background, and in the center of the page, the fox's tail is flipped up in a curve with its white tip pointing to the left.  The text reads:

On the jacket the fox and the words One Fox are varnished.

On the opening endpapers is a pattern of colorful single paw prints.  Shades of red, blue, green and yellow and blends of these hues cover the pages except for one small portion.  In this the fox is tucked.  It's walking, smiling and looking behind it.  On the closing endpapers is an equally vivid array of sleeping hens set in diagonal rows.  Across the white verso (dedication and publication text) and title pages are twelve paw prints in various shades.

The illustrations by Kate Read are rendered

as mixed media with collage and painting.

The first illustration on a crisp white canvas is of the fox curled as if resting and opposite the words on the left.  It is next featured on the left, much closer to readers, looking ready to pounce or pursue.  All we see is its head, a small bit of its back and two front paws.  The text for this picture is on the right page.

When the number four is shown, the darkness is falling.  In this illustration Kate Read shifts her perspective.  The text is in a large horizontal column at the bottom of the page.  Along the top we see four paws and a tail moving in front of a shadowy chicken wire fence.  Now the crisp white background is replaced with black until a pause and pacing dictates change.  Hilarity follows on a page covered in chicken feet prints in many hues with the words

No hens or foxes were harmed
in the making of this book.

One of my many favorite illustrations is when the fox has its head in the henhouse.  It is a double-page picture (Nearly all of them are double-page pictures.) There are various shades of black to denote the straw, hens, the inside walls of the henhouse and the fox.  The number 8 is in red.  The text
is in white to match two sets of frightened eyes looking right at readers, one set of horrified eyes looking at the fox and another set of eyes fiercely looking at the chickens.  There is also a row of sharp white teeth.  This is when readers will probably gasp out loud.


As a read aloud, One Fox: A Counting Book Thriller written and illustrated by Kate Read, is a treasure.  With the right voice and pacing, the words and images will move off the page into the storytelling circle wrapping around listeners whether it's one-on-one or with a group.  I highly recommend this title for your personal and professional collections.