It's not that it hasn't arrived earlier than expected previously.  It has but disappeared within hours.  It will begin this morning and will most likely continue for the next four days.  It's not every year snowfall carpets the landscape on Halloween.  Trick or treaters will be trudging through the cold, gusty winds and white this year in northern Michigan. 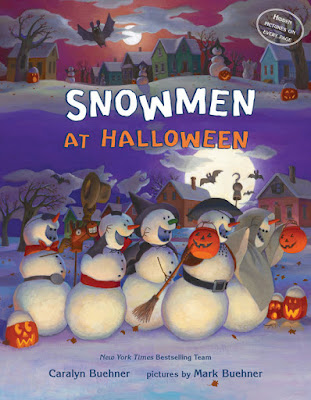 Will anyone or anything else be brave enough to venture out in this storm?  We're never certain who or what roams around on Halloween night after we are tucked inside our homes.  Snowmen At Halloween (Dial Books for Young Readers, an imprint of Penguin Random House LLC, August 20, 2019) written by Caralyn Buehner with pictures by Mark Buehner is the fifth book by this wife and husband team to follow the adventures of special snowmen.  The previous titles Snowmen At Night, Snowmen At Christmas, Snowmen All Year and Snowmen At Work are full of action, fun and hidden pictures.  This newest book continues with the beloved elements found in the first four and is sure to become a seasonal favorite.

One autumn day the air turned
cold and it began to snow.
We went outside and made some
snowmen standing in a row.

As the narrator, a brother tells us his sister had a box of dress-up items for Halloween.  They pulled out some of them and placed them on the newly formed snowmen.  Standing before them were now a ghost, a pirate, a witch, a vampire and a cowboy.  After trick-or-treating, when the siblings walked past the snowmen, the brother was sure one of the snowmen winked.  Winked?  Perhaps, the boy wondered snowmen do enjoy Halloween.  Perhaps . . .

Beneath a full moon all the snowmen dressed in costumes from all the homes in the village formed a parade.  They gathered in the center of town where the glow of Halloween lights and lanterns glimmered a welcome to one and all.  Like the best kind of party, this occasion began with pumpkin carving.

Carnival games challenged them to fish or toss a ring.  They relished the sweet stickiness of caramel treats and apples bobbed as they tried to grab one.  A crowd formed around a fortune teller.  Stacks of hay bales walled in a wondrous maze and spooky tales thrilled a crowd. (None of whom were too close to the crackling fire.)

After the joyful celebration, each snowman wandered home trick-or-treating along the way.  Of those, five, one a ghost, another a pirate, a witch, a vampire and a cowboy, could hardly contain their laughter.  In the morning, the day after Halloween, these speculations of the brother, were hard to confirm because a warming during the night had melted all the snow except for a few small patches.  And yet, the five had their say.


As the fourth line of the first two sentences is completed, you're aware of something a bit unusual.  Enough snow to make five snowmen in autumn is a departure from the status quo.  Caralyn Buehner maintains this atmosphere of the unexpected with her rhythm supplied by rhyming words at the end of each two sentences or lines.  Sometimes they are divided and grouped as four lines and other times simply as two sentences together or a single sentence with punctuation indicating a pause.  Activities associated with this celebratory holiday and its parties are described with words recreating the fun and appropriate mood.  Here is a single sentence.

It's a dark and spooky night, but the snowmen aren't afraid---
They'll follow one another in a Halloween parade,
Gliding down the moonlit streets into the village square,
Beckoned by the twinkling lights and lanterns hanging there.


I don't know about you but when I look at those snowmen on the front of the matching dust jacket and book case, I want to join them in their laughter and Halloween fun.  All the details beneath the title text ask readers to pause.  This is the first of many times when you'll carefully look at a scene, noticing all the extra things Mark Buehner includes in his painting.  Above the title text is a more panoramic scene of the neighborhood.  The use of light and shadow here and throughout the book is wonderful.

To the left, on the back, small images of the four preceding titles are shown with their awards and quotes from professional journals.  A deep, rich royal blue covers the opening and closing endpapers.  On the first flap readers are challenged to locate a rabbit, a cat and a T.rex cleverly hidden in each picture.

With a page turn we are greeted by a grinning snow-topped jack-o-lantern sitting on a porch railing.  Flakes and autumn leaves are falling around it.  The background is a pale blue, purple and pink blend.  On the title page the pictorial interpretation of the story starts with a bird's eye view of the brother and sister pushing snowballs through the snow, already making their snowmen.  Their snowballs are fashioning paths of green from the grass underneath.  Their footprints in the snow make other trails.

Each two-page image is painted with meticulous attention to the time of day and the movements of the characters in each setting.  The glow of the full moon casts an eerie light.  Is that a cloud or a ghost?  Why are there more bats than normal?

Readers will be enchanted by the array of costumes on all the snowmen.  (It might be fun to make a list.)  The expressions on the jack-o-lanterns are intriguing as well.  The use of color in each illustration heightens the excitement of the holiday, the season and the fascinating festivities.  Artist Mark Buehner shifts his perspectives to take us deeper into the story; close-up to the snowmen at the party playing games, even closer when they're gathered around looking into a snow globe for predicting their futures and a bird's eye view of participants in the maze.

One of my many, many favorite images is a double-page picture. (They're all double-page pictures.)  On a patch of grass beneath the roof of an orange tent is a kiddie pool etched with fish on the outside.  Gathered around it are three snowmen trying to catch fish with magnets. The fourth snowman dressed as Robin Hood is attempting to shoot one with his suction cup arrow.  Tiny ghosts hang from the metal supports underneath the tent roof. Throughout this setting are jack-o-lanterns glowing with grins. Orange lights are strung from booth to booth.  A ring toss game is off to the right.  Behind and next to it is the fortune teller's tent.  Moving to the left is face painting and then a BINGO booth.  The costumes are amazing!  You can almost hear the excitement and laughter.


Whether you are a fan of or familiar with the other Snowmen books, you'll rejoice at this new addition, Snowmen At Halloween written by Caralyn Buehner with pictures by Mark Buehner.  The words create a Halloween happening possibility and the illustrations bring it to life with marvelous merriment.  You'll want to add this to your professional and personal collections.  Good luck with finding all the extra goodies in the visuals.  If you have trouble, on the inside of the dust jacket is a key.

To discover more about Caralyn Buehner and Mark Buehner and their other work, please follow the link attached to Caralyn Buehner's name to access their shared websites.  They maintain accounts on Facebook, Instagram and Twitter.  The book trailer for this new title on their Facebook page is delightfully spooky.  At the publisher's website you can view the first illustration in the book.  Here is a link to an interesting biographical account of Mark Buehner's artwork.  Enjoy the video with Mark Buehner speaking about his painting.