Parents are not perfect.  They are as flawed as the rest of us humans.  They, for the most part, try their level best to raise an individual or individuals who will reflect the best parts of each of them.  Their aim is to nudge their youngsters to realize their full potential, and, hopefully, make the world better for themselves and everyone in it. 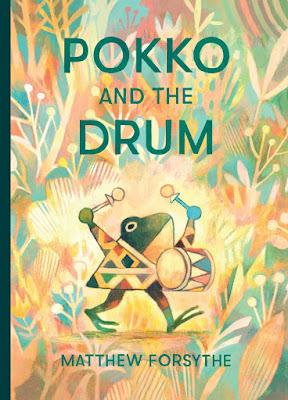 What is probably most startling and wondrous to parents is when their objective is reached.  Even more surprising is when it happens in an unexpected way.  Pokko And The Drum (A Paula Wiseman Book, Simon & Schuster Books for Young Readers, October 1, 2019) written and illustrated by Matthew Forsythe follows the rise to forest fame of a young frog.

The biggest mistake Pokko's parents
ever made was giving her a drum.

What readers quickly realize is, this was not their first mistake in gift giving to Pokko.  It should have dawned on them that the jumbo slingshot and large balloon would have less than stellar results. Immediately the quiet cuisine-creator father and literary-lover mother knew the drum was too loud for them to think or have a conversation.  Pokko played . . .constantly.

Pokko's father gently suggested one morning that she play it outside being as quiet as possible because they were quiet frogs who preferred to remain living unnoticed.  Pokko thought this was a good idea.  She left their home inside a mushroom.

The forest was beautiful and a bit too silent.  Pokko started to lightly beat her drum to dispel the hush around her.  Before she knew what was happening a banjo-playing raccoon joined her.  A rabbit was next, tooting out tunes on a trumpet.

Back at the mushroom abode of Pokko and her parents, a carefully prepared dinner was about to go uneaten.  Two unassuming adult frogs were about to have their lives changed.  Pokko kept playing her drum.


With his opening sentence Matthew Forsythe has our undivided attention.  With his second sentence, we are not leaving this book until every single syllable is read.  Matthew's pacing in the narrative is pure perfection.  He leaves space for readers' reactions and the humor to bubble to the surface.

The inclusion of dialogue between the parents and Pokko and the wolf enhances the comedy but also leaves room for speculation.  What is there about Pokko that fosters respect?  Here are three sentences on three separate pages.  Do you see what those words are doing?  Do you feel something shifting?

It had just rained, and the forest
was sparkling like an emerald.

And it was quiet.


The front, the right side of the opened dust jacket and book case are identical.  It is here that Matthew Forsythe introduces the color palette used throughout his book.  The hues are soft and subtle, but their power lies in the patterns and textures.  We want to know who this Pokko is.  We want to know about the drum.

To the left, on the back of the dust jacket, is a series of six smaller images, three to a row.  Three feature flora from the forest.  Another one shows the frogs' mushroom home.  The final two are of Pokko's father and mother doing what they love best.  The caption reads:

A story about art.  And persistence.
And a family of frogs that lives in a mushroom.

On the back of the book case is an image from the interior of Pokko's father helping her get on her coat.  The drum and drumsticks are next to them.  One other item of note is the ISBN.  The barcode in black is the design for the side of a drum in white with yellow drumsticks.

The opening and closing endpapers are a pattern of mushrooms, leaves and berries, lichen, stems, leaves and flowers and tiny homes in mushrooms and one large tree branch.  It's a glimpse into the realm of possibilities.  These elements are placed on a white-cream colored paper, heavier and used throughout the book.

Matthew Forsythe uses full-page pictures, and double-page pictures to extend his narrative and increase its emotional impact.  Some of his visuals cross the gutter, creating a column for text.  Or the area for text crosses the gutter and leaves a column for an image.  As he does in his text, he leaves room for speculation and interpretation in his art.  These illustrations are


His perspectives are altered for maximum effect.  His close-ups have a huge impact.  Readers will want to reread this book repeatedly looking for portions of the book leaning more heavily on yellows and reds.  What, if any, is the importance of this change?

One of my many favorite illustrations spans two pages.  It is when Pokko is first walking through the woods.  A long horizontal column at the bottom provides a space for text on the right.  There are several plants using the same white-cream color to balance the design.  The world of the woods surrounds Pokko but we must remember we are seeing it at a different level than we do as humans.  There is a hint of events to come hidden on the left behind a tree.  The look on Pokko's face reflects her emotional state at being in this forest, this very quiet forest.  She carries her drum with both hands in front of her.  Her drumsticks are tucked in a pocket at her back.


This is one of those books you'll always remember reading for the first time.  Pokko And The Drum written and illustrated by Matthew Forsythe leaves an impression on your mind and your heart.  I am looking forward to sharing it with readers.  I highly recommend this title for your personal and professional collections. Today Publishers Weekly announced their Best Books 2019.  This title is on the list.

Please access Matthew Forsythe's website by following the link attached to his name to learn more about his other work.  Matthew Forsythe maintains accounts on Instagram, Tumblr and Twitter.  At author, reviewer and blogger Julie Danielson's site, Seven Impossible Things Before Breakfast, she highlights Matthew Forsythe and this book.  At the publisher's website you can view multiple interior images.
Posted by Xena's Mom at 10:49 PM