On September 19, 2019 headlines filled social media feeds with shocking information.  Since 1970 the bird population in Canada and the United States diminished by nearly three billion.  Yes! Three billion! (You can read about it at Science News, NPR Science, NBC News and The Cornell Lab of Ornithology.)  The study did not indicate specifically what the cause might be, but other researchers believe degradation by humans and loss of habitat is a top contender especially for grassland birds whose numbers decreased the most. 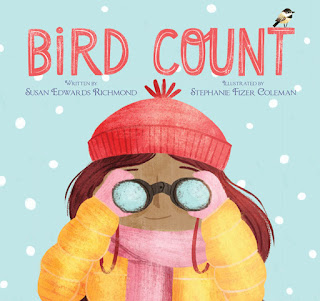 I shake Mom in the dark.  "Wake up, sleepy head! It's Bird Count Day."
One Sunday each winter we take part in a bird census called the Christmas Bird Count.  On this day, we go out and count every bird we see or hear.

As mother and daughter get dressed in their winter clothing, we are informed that people from Canada to Antarctica will be participating.  Soon a knock on the door announces the arrival of Big Al.  He's their team leader and driver for the day.  Throughout the day, they will visit the same places they do every year.

For the first time Ava is given the task of tally taker.  Initially the trio hears is the call of a great horned owl.  Hearing a bird is the same as seeing a bird.  A cheerful chickadee calls out next and is counted.  A large V of Canada geese pass over the car.  Five slash marks are added to the sheet.  At a field only Ava sees a mockingbird, so it is not included on the list.

Coloration, activities and bird calls are used in the identification.  If Ava, her mother and Big Al don't agree on the tally for a large group of birds, they take an average.  Driving through residential areas, bird feeders are a hot spot for smaller birds and larger birds seeking to make a meal of the smaller birds.  Toward the end of their route, they pursue a lead to locate a special bird and Mother Nature gives them a surprise.  As the sun dips below the horizon, several long-awaited events make for a remarkable Christmas Bird Count.


Readers easily step into this story through Ava's narration and the dialogue between her, her mother and Big Al.  We become further engaged in what Ava reveals page turn by turn by the pacing.  Author Susan Edwards Richmond carefully weaves factual information into the text while maintaining the excitement of this annual excursion.

We are also learning about a variety of birds, twenty-four in total, as the tally increases with each stop and all the points in-between the beginning and end of their day. It's as if we are going on a scavenger hunt.  Here is a passage.

"Nothing flying right now," Big Al observes.
We scan the trees, looking for familiar shapes.
"Tallest oak," Mom whispers.  "Two o'clock."
Big Al and I read the tree like a big clock
face, with noon at the top and six at the bottom.

There it is, a big bird of prey with its feathers
fluffed up.  Its back is brown, its belly white.
One red-tailed hawk.
"Let's find its mate," Al says.  He and Mom
search the other trees.  But I stick with the same
tree, sure the other hawk is there.
I check the tree again. "Six o'clock," I say.
"Close to the trunk."
"Good eye, Ava," says Big Al.


Everything about the matching dust jacket and book case, welcomes the reader to pick this book up and open it.  The pale wintry sky dotted with snowflakes spanning flap edge to flap edge and mirrored in the lens of Ava's binoculars is a wonderful technique.  The color of her hat and the title text is a lighter shade of the red shown on the cardinals on the right jacket flap and the heads of the eleven turkeys crossing the back of the jacket and case.  Ava's mittens, scarf and coat complement each other.  The chickadee on the T is the final perfect touch.

The same shade of the wintry sky is used as a canvas color for the opening and closing endpapers.  With a first page turn we see a single chickadee resting in a leafless bush as the snow falls.  Another page turn has a variety of birds in flight across the verso and title pages with one exception.  The chickadee has positioned itself on the T again.  The placement of a raven on the title page is of importance, too.

Each image rendered by Stephanie Fizer Coleman digitally is a full-page visual, partial-page picture with liberal use of white space, or nearly a double-page image with space left for the tally text.  The tally text is written in a ringed notebook on the right side of the illustration using what appears to be a font similar to the title text.  The perspective of the images varies in sync with the narrative.  We are sometimes near the characters, given a bird's eye view or a wider view of a particular setting.

Even though it's winter Stephanie Fizer Coleman adds bits of color in clothing, the color of Big Al's truck, the birds, signage on buildings, the buildings or a stunning sunset behind the school buses.  Careful readers will notice extra details.  Ava's pajamas are printed with birds.  Christmas evergreen wreaths are hanging in the windows of the Bagel Bin shop.

One of my many favorite illustrations is a bird's eye view of a bird's eye view.  It's as if we are looking down on the five Canada geese flying over the community.  It appears they are following the path the street is making through the neighborhood.  Homes in brown extend back from the road connected by their driveways.  A few carefully placed shrubs and trees are seen looking directly at their tops.  Almost to the far right of the street, the lights from Big Al's truck shine ahead.  The color palette is subdued by striking against the snowy ground.


It's guaranteed readers will be ready to join a local Christmas Bird Count after reading Bird Count written by Susan Edwards Richmond with illustrations by Stephanie Fizer Coleman.  (I know I am.) The enthusiasm Ava, her mother and Big Al have for this yearly adventure is contagious and heightened through the words and artwork of these two creators.  This title would be wonderful for a unit on birds, citizen scientists and their value, seasonal projects and for the pure happiness associated with enjoying Mother Nature.  At the close of the book are more facts about each of the birds named in the book, an author's note and additional resources.  I highly recommend this title for your professional and personal collections.