The Call Of The Sea

No matter how much we study and learn, they will continue to astound us, some more than others.  We think we know, given a certain set of circumstances, how they will act. With each feat, our admiration grows for members of the animal kingdom. 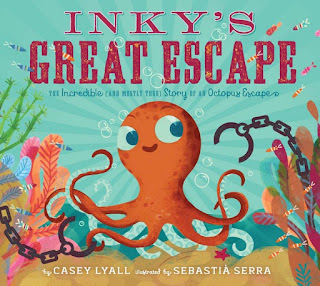 In 2016 an octopus residing in the National Aquarium of New Zealand in Napier, New Zealand decided it was time for a change of scenery.  Inky's Great Escape: The Incredible (And Mostly True) Story Of An Octopus Escape (Sterling Children's Books, November 7, 2017) written by Casey Lyall with illustrations by Sebastia Serra proposes an account of this clever getaway.  This octopus knew his capabilities, saw an opportunity and traded captivity for freedom.

Inky was the greatest escape octopus of all time.  He'd slithered his way out of every trap invented and lived to tell the tale.

All these escapes had taken their toll, so when fishermen caught him one day; he decided to go with the flow.  He ended up staying with another octopus named Blotchy at an aquarium.  Their days and nights were filled with fun and games and plenty of stories.

Having lived in the aquarium for as long as he could remember, Blotchy found Inky's accounts of daring deeds a bit hard to believe.  One quiet evening when they were alone, Blotchy issued a challenge.  Inky accepted it with confidence, declaring it would be his best escapade ever.

A plan was designed by the masterful Inky.  As time passed Blotchy teased him, saying he was all talk and no action but Inky knew waiting was integral to the success of the operation.  An aquarium worker finally provided a sliver of possibility.

Using all his mental and physical skills, the eight-armed creature crept from the confines of both his tank and the building.  A trail told the tale of the triumphant avenue toward the open water.  Inky did indeed make history but a mystery remains.


Using a marvelous blend of fact and fiction author Casey Lyall recounts an adventure to remember.  She provides a potential introduction and conclusion to the famous news headlines, answering questions readers might have about the escape artist and his tank mate.  Humor is interjected in the form of the games they played, hide-and-seek, charades and Crazy Eights, and the subtle mention of the bookshelves Blotchy maintains.

The conversations between Inky and Blotchy clearly indicate their different personality traits.  Her description of the magnificent disappearing act will have readers on the edge of their collective seats.  Here are sample passages.

Inky's limbs swirled as he hauled himself
along the tiles.  He forged ahead while the
"Incredible Idea for an Ingenious Escape"
unfolded perfectly.

All the creatures in the
aquarium had their sights
set on Inky.  They watched
his every move, hardly
daring to blow a bubble.


The color palette used in the matching, opened dust jacket and book case will have readers grinning in pleasure.  The flora and fauna of the world in the aquarium invite them to reach for their closest reference books on residences of octopuses.  By placing the broken chains on either side of Inky, we know he is a one-of-a-kind octopus.  To the left, on the back in an extension of the scene on the right, Blotchy looks with respect and affection at a poster declaring:

INKY
THE GREATEST ESCAPE
OCTOPUS
OF ALL TIME.

Readers will love the raised elements and use of foil.

In shades of blue and green, ocean creatures swim on the different opening and closing endpapers.  In the first one, Inky is moving off the right edge.  In the final endpapers, the poster announcing Inky's accomplishments is set among coral and seaweed as the animals gather to read it.  The verso and title pages are a continuation of the opening endpapers with Inky leaving a trail of bubbles from left to right as he appears under the title text smiling up at the words.

Rendered in pencil and ink and then digitally colored the bright, spirited illustrations by Sebastia Serra span two pages.  To indicate the passage of time or separate incidents other smaller images are placed within the larger context.  Sebastia Serra alters his perspectives bringing us close to Inky and Blotchy and then giving us a larger view of the tanks within the aquarium.  This brings the story into our space.  His attention to details welcomes readers to pause at page turns.

One of my many favorite pictures is when Inky has taken advantage of the aquarium worker's mistake.  Most of his body is on top of the tank; a few arms are still in the water.  Inky is looking back at Blotchy and asking the octopus to come with him.  Oblivious to what is happening, the worker walks away to the right wearing headphones and carrying a ladder.  The fish in the tank next to Inky and Blotchy, on the right, are all pointing upward and watching the event.  The aquarium is dark except for two overhead lights shining on particular portions of the tanks.  Tiny explanatory signs are posted in front of each tank window.


Inky's Great Escape: The Incredible (And Mostly True) Story of An Octopus Escape written by Casey Lyall with illustrations by Sebastia Serra vividly brings to life for the intended audience (and those of us lucky enough to read it aloud) a story of opportunity, patience and possibilities.  It highlights the truth, heightens our desire for more information and illuminates the power of inventiveness in readers and the author and illustrator.  Your professional and personal collections need to make space for this title.

To learn more about both Casey Lyall and Sebastia Serra and their other work, please visit their websites by following the links attached to their names.  The cover reveal for this title with a short Q & A with the illustrator and author appears at This Picture Book Life.  Here is a link to one of many accounts of Inky's real life escape as noted by NPR.
Posted by Xena's Mom at 3:47 PM