A Conversation with Annabeth Bondor-Stone and Connor White

Authors Annabeth Bondor-Stone and Connor White, known for middle grade books The Pirate Who’s Afraid of Everything (Shivers! Volume 1),  The Pirate Who’s Back in Bunny Slippers (Shivers! Volume 2)  and the upcoming Time Tracers: The Stolen Summers to be released in May, 2018, are starring in a new web video series, The Truth About Libraries.  As you can see when you watch the video below, Connor has a lot to learn about libraries and Annabeth is just the person to guide him in making the right discoveries.  Annabeth’s calm, quiet, and confident presence in contrast to Connor’s overly exuberant, loud and skeptical personality provide viewers with an engaging blend of comedy and information.

If you’re like me after watching this first episode I had some questions I wanted to ask Annabeth and Connor.  Fortunately, they agreed to chat with me here at Librarian’s Quest.  I’ve got pizza dough rising and the sauce simmering, so I’m hoping we can all sit down and have lunch together.  If they bring their pug, I know Mulan will enjoy romping around the yard with her. 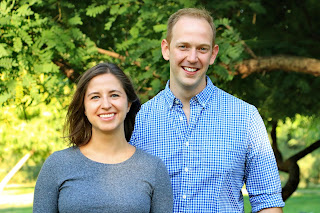 It’s a pleasure to meet you Annabeth and Connor.

Connor: Thank you for having us and for that incredibly kind introduction. Maybe you could come with us everywhere we go and introduce us like that?

From reading your bios at your website you are both graduates of Northwestern University.  What were your areas of study?

Annabeth: We both studied Theater and I got a certificate in Creative Writing for the Media.

Connor: I also got a certificate, but it was for Most Pizza Consumed. I printed it myself and hung it on my wall.

In addition to authoring children’s books you both work with Story Pirates located in Los Angeles.  What can you tell us about your roles in the organization?  Were you part of the founding group in 2004?

AB: We weren’t part of the founding group, though Connor has been with the company since graduating college in ‘09. I became a teaching artist for the company in 2014.

C: I was originally cast in the New York branch and when we moved to Los Angeles, I became a national tour director and the Associate Education Director for the LA branch of Story Pirates. Through Story Pirates, we have worked with thousands of elementary students in California, teaching them creative writing and then turning their stories into sketch comedy musicals.

AB: If there is a better company to work for, we haven’t heard of it!

What prompted the two of you to make the web video series, The Truth About Libraries?

AB: Since our book Shivers! The Pirate Who’s Afraid of Everything came out, we’ve been fortunate enough to travel to schools all over the country, using comedy to promote literacy. Along the way, we've witnessed firsthand how incredible and unique every library is.

C: We wanted to showcase all of the cool stuff about the library that kids may not know about. Plus, we’ve met so many wild and wonderful librarians, we thought the world deserved to know them!

I enjoy in the first episode how you focus on the aspects of the materials being free, the adult staff being welcoming and well-read and the existence of story time.  So often those of us who have been in the field awhile, tend to take these things for granted but when you point them out in the video, they are pretty amazing.  Can you give us a hint of things to come?  How many episodes are you planning?

AB: Well, to be honest, Connor was pretty taken aback when he learned that libraries existed earlier this year…

C: An endless trove of great books and fun community events...all for free?? Could it really be true?

AB: We’ve completed four episodes of The Truth About Libraries, with more on the way in early 2018. In the first season, we learn that there’s more to the library than we could have imagined.

C: Including Ukuleles and a book bike that brings the library out to the streets of LA!

AB: At the end of the season, Connor finally takes the plunge and attempts to sign up for his very own library card. But does he get it? Does he even remember his full name? You’ll have to watch to find out!

Is a script written before filming begins?  Do you do the filming or do you have a cameraperson?  Do you do your own editing?  Can you describe the process?

AB: We write an outline of each episode, but we really leave it to the librarians to guide us. After  all, they are the ones who know why each library is so uniquely awesome. We’ve bribed some generous friends who have helped us with camerawork and editing.

C: But overall, it’s a pretty low tech operation. We shoot on our phones and Annabeth does most of the editing. I’m no help; I don’t even know how to how set my alarm. Fortunately, a really loud bird lives right outside my window.

What do you enjoy most about living in Los Angeles?

AB: We’re fortunate to have a lot of great friends here who are writers, actors, and comedians - so there’s never a dull moment.

C: In the summer, we like to cram our pug and our friends into the car and hit the beach. And in the winter, we like to wear heavy coats and pretend it’s cold. Pizza is a year-round thing for us.

What are your favorite memories of libraries?

C: Storytime! I loved storytime with my elementary librarian, Mrs. Jewels. It felt like daydreaming but for the whole class. Last year, Shivers! was the most checked out book at my elementary school. Learning that was one of the most rewarding experiences of my career.

AB: I spent a ton of time in the library in elementary school. My best friend and I had a book club… well, we were the only members, but we did recommend lots of books to each other! I remember we loved Half Magic by Edward Eager. We talked about that one for weeks.

Do you have a favorite children’s book?  What are you reading now?

C: My favorite children’s book is Don’t Bump the Glump by Shel Silverstein. I’ve always been inspired by the inventiveness and wordplay in all of Shel Silverstein’s books.

AB: I’ve got to go with Matilda by Roald Dahl. A girl who loves reading and moves things with her mind? Sign me up!

How long have you had your pug? What is her name?

AB: Our pug’s name is Agador but everyone calls her Aggie. We’ve had her for over five years.

C: 39 dog years to be exact! She snores while she sleeps, which is most of the day. She has a whimsical mysticism about her and is a real source of inspiration. We are big fans.

I am happy both Annabeth and Connor were able to chat with me today.  I’ve gotten a huge dose of laughter, certain to last for several days.  I can hardly wait to see what the next episode of The Truth About Libraries will bring to viewers.

If you want to know more about Annabeth Bondor-Stone and Connor White you can access their website here.