Everyone Needs A Chicken . . . Maybe

Not for the first time and hopefully not for the last time, during read aloud today several groups of students and I were laughing out loud . . . repeatedly.  Sometimes it was spontaneous but other times for a split second we would look at each other before bursting into gales of giggles.  These shared moments when the narrative reaches out and touches our collective and universal senses of humor are invaluable. 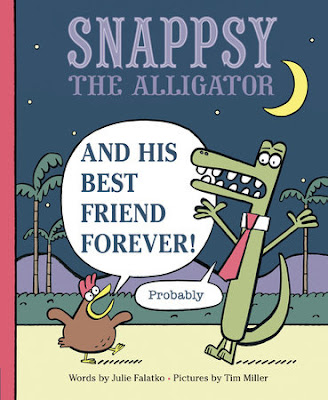 Snappsy the alligator was the most interesting reptile in the whole world.

As the narrator proceeds to praise all the attributes of Snappsy in his usual extravagant manner, Snappsy is a tad bit uncomfortable with this declaration of friendship.  As the narrator, the chicken, continues proclaiming their closeness, Snappsy turns to exist his own home to go into town.  He requests to go alone.

Before he can even get out the door, the chicken tries to stop him with alternate activities like a sleepover.  Ever the rational one, Snappsy does remind him it's still morning.  When Snappsy finally leaves and arrives at the library, the chicken follows him like a shadow, remarking that they need a book on sleepovers.  Snappsy is not happy.  He craves quiet.  He is a solo sort of soul.

With every one of Snappsy's voiced ideas the chicken counters with ridiculous replies.  Who wears pizza on their heads like hats?  As they leave the grocery store, Snappsy has a handful of vegetables in the cart.  The chicken creates an overflowing pyramid with his selections.  As they get closer and closer to Snappsy's house, Snappsy get more and more irritated.

With every fresh announcement of their BFF-ness by the chicken, Snappsy's exasperation elevates.  (He does learn vital information about the chicken.)  With every offered opinion of what they should be doing, Snappsy's negativeness accelerates.  He snaps.

Finally in the absence of this nuisance, Snappsy can engage in his most desired pursuits.  Or can he?  The great manipulator strikes again.  And the chicken has one final twist to add to this tale.


The fabulous gift of comedic timing we saw in the first book is prevalent in this companion title.  Julie Falatko supplies a contrast in the manner in which the story is told by having not only a dueling dialogue but a narrative text which provides additional contrasts.  You could say the opposites attract theory is full-blown in this book.  For every outrageous, quirky remark the chicken makes, Snappsy gives a decidedly common sense answer.  Here is a sample passage.

Narrator:  Snappsy the alligator, who only occasionally stayed at home by
himself, set off to plan for a night of fun with his very best friend.

Snappsy:  I want to check
out the new smoothie place.

The chicken:  Smoothies are for a morning of
boring.  Let's stop for popcorn!
Scary movies!


The image on the front of the dust jacket is the relationship of Snappsy and the chicken in a nutshell; both are determined but one is more optimistic about their friendship than the other.  In case readers are wondering why the setting is during the evening, a revelation of the book case offers a possible explanation. To the left, on the back of the dust jacket, within a thin white frame is Snappsy walking to town.  On the winding path, down the hill from his house and behind him are a line of animals, presumably in a conga line.  Beneath this illustration on the same nighttime canvas are two mice.  It looks as though they have popped up from behind the ISBN.  One is holding a magnifying glass and looking at the other.

The book case is fantastic!  That's all I am going to say.  I want you to have the distinct pleasure of laughing loud and long when you see the front and the back.  SQUEAK!  SQUEAK!  SQUEAK!

On the opening and closing endpapers seventeen items you might see at a sleepover (the chicken's kind of sleepover) have been placed in three rows on a bright, white background.  Readers are treated to a continuation of the visual story from the book case on the title page. Rendered in

brush and ink and computer hocus-pocus

the pictures range in size from two pages to single pages and to several images on a single page with thin black lines framing them.  In keeping with the pacing and to emphasize a point Tim Miller also extends an image to the page edge or creates an oval shape with no frame.  In keeping with design balance and interest, elements sometimes break an obvious frame.

The expressions on the faces of Snappsy and the chicken as well as their body language are downright hilarious.  Remember the two mice above the ISBN?  Can you find them again?

One of my many favorite illustrations is the first one.  It is spread across two pages.  We are shown an interior of Snappsy's bathroom. (How can he have a bathroom this big inside that tiny wooden home?)  Snappsy is standing in front of the sink brushing his teeth.  Over the sink is a mirror but he is looking behind himself at the chicken who happens to be standing on the toilet seat.  The chicken is talking and holding this very book.  On a rack next to the sink hangs a towel with an embroidered initial S.  Next to the toilet is a magazine titled Smoothies Monthly.  A vase of tulips is on a small table.

As soon as you look at the book's dust jacket and book case you know you are holding a laughter generator in your hands.  Snappsy The Alligator And His Best Friend Forever! (Probably) written by Julie Falatko with illustrations by Tim Miller is loaded with contrasts as a friendship unfolds.  The text and the images work in perfect harmony to convey to readers the uneven line these two individuals follow toward those results.  When it comes to this chicken, you can be assured of one surprise after another.  You'll certainly want this companion title on both your professional and personal bookshelves.

To learn more about Julie Falatko and Tim Miller and their other work, please follow the links attached to their names to access the websites.  Julie has two very funny videos on her site about this book.  One refers to the first look at the book case and the other introduces us to this story.  (I love the dogs, Julie.)  At the publisher's website you can see one portion of the endpapers.  Julie talks about this book at the Nerdy Book Club.  This book is one of several titles highlighted by author, reviewer and blogger Julie Danielson on her blog, Seven Impossible Things Before Breakfast.  You get a peek at more interior images.  Tim Miller is interviewed at Brightly.  At KidLit TV Tim show us how to draw characters from Snappsy The Alligator and Moo Moo in a Tutu.
Posted by Xena's Mom at 11:57 PM