The cost for it is usually free.  Some heed it immediately.  Others don't initially follow it, but realize the benefit of taking it.  There are those stubborn few who rarely listen.  Sometimes they have a good reason. 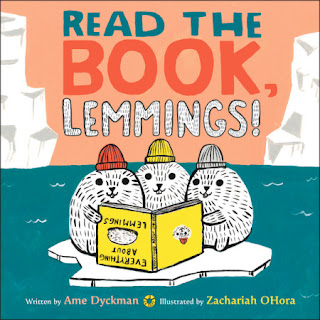 When author Ame Dyckman and illustrator Zachariah OHora collaborate readers are certain to find themselves part of numerous humorous situations.  In their newest title, READ THE BOOK, LEMMINGS! (Little, Brown And Company, November 7, 2017) we travel to the northern regions of the Arctic.  A trio of lemmings repeatedly fails to listen to advice, participating in risky behavior.

Foxy found a quiet spot
to read his book
about lemmings.

This First Mate aboard the S. S. Cliff is shocked to discover the age-old belief of lemmings jumping off cliffs is simply not true.  After he utters this statement aloud, three passengers, lemmings, hearing the word jump respond by crying out

as they leap over the side of the ship.  Captain PB (Polar Bear), seated on a stool and reading his newspaper, barely acknowledges this mishap but makes a single statement.  Foxy, too, realizes they obviously did not read the book.

Peering at them through a telescope Foxy notices they need assistance to keep from drowning.  Using the Captain's bucket, filled with fish, he retrieves them from the chilly sea.  He promptly gives them different colored hats, red, yellow and pale gray, and names, Jumper, Me Too and Ditto. He has a few choice words for the trio.

He admonishes them to read the book, Everything About Lemmings.  It says lemmings don't jump off cliffs.  As soon as he says the word, jump, they jump . . . again.  Making an astute observation, Captain PB agrees.  The lemmings did not read the book.  Foxy saves them . . . again.

A little less friendly in his rescue, Foxy reprimands the lemmings giving them the book.  They return it a little too quickly.  Foxy does not say the word jump once but someone wearing a captain's hat does.  Three lemmings jump into the icy water.

This time Foxy dives, swims and saves the lemmings but he is clearly upset with them.  He can't figure out why they didn't read the book.  Their reply activates Foxy into full educator mode. The results give the Mate and his Captain the free time they need to continue their reading but something and three individuals are missing.  LEMMINGS!


In a short author's note Ame Dyckman explains how the idea for this book grew from a movie she saw as a child.  In her inventive mind a scenario unfolds giving us a hilarious story and a tribute to the power of reading.  No one but Ame could create the three names for those lemmings.

In the true fashion of a master weaver of tales she has Jumper, Me Too and Ditto jumping off the ship three times before the plot shifts revealing the difficulty.  The characters of Foxy the Mate and Captain Polar Bear are a perfect duo, the one clearly cleverer than the other, a speaker of few words and a repeated remark.  It makes for interesting conversations brimming with comedy.  Here is a sample passage.


Upon opening the dust jacket (I'm working with an F & G.) an entire Arctic scene comes into view.  The three lemmings in their hats reading Foxy's book, upside down, is a huge hint of events to come.  To the left, on the back, the S. S. Cliff is drifting on a calm sea.  The cargo ship also happens to be an expressive whale.  It's equipped with a helicopter, a submarine, a crane, and a wheelhouse with satellite dishes.  A speech balloon coming from the ship states:

We are also introduced to the limited color palette selected by illustrator Zachariah OHora.  The dark peach, white, gray, black, red, yellow and shades of teal are used throughout the book.  The title page is a close up of the ship with the text on the largest part of the whale.  We can see three tiny lemmings in the water by the whale's smile.  The opening endpapers have an explanatory sign attached to an iceberg stating the status of lemming jumping and their literacy.  The three yet unnamed lemmings are leaping from a nearby icy cliff.  On the closing endpapers, containing the dedications, author's note and publication information, the lemmings are now on that same iceberg with the sign.  Changes are being made as the S. S. Cliff sails away in the distance.

Rendered in acrylic on 90-pound acid-free Stonehedge paper the images alternate between two-page spreads, single-page pictures and several visuals on a single page.  We are even treated to a vertical illustration as the lemmings sink into the sea. These size shifts contribute to the pacing and emphasis on the narrative.  Zachariah also changes the perspective giving us an overview before bringing us close to the characters.

Careful readers will notice the extra details he includes like the lemmings on the book's spine, the message using the nautical signal flags, the captain giving a thumb's up for success and the narwhal swimming in the distance.  The expressions on the characters' faces leave no doubt as to their mood.  They range from bewilderment, fear, disgust, anger, indifference, affection and bliss, ignorant and otherwise.

One of my favorite of many illustrations is the first time all the characters are together on the S. S. Cliff.  We see Captain PB holding his newspaper and fishing rod with the currently empty bucket next to him.  Foxy is reading the Everything About Lemmings book.  The nautical signal flags are stretched over them.  The lemmings, on the right, are ready to jump after Foxy unknowingly says the word jump.  Tall icebergs tower from the sea, having been placed on either side of the peach sky. You can already feel the laughter inside you ready to burst out.


This book is like your favorite snack food, irresistible.  You can't read READ THE BOOK, LEMMINGS! written by Ame Dyckman with illustrations by Zachariah OHora only once either.  Each time you read it another tiny detail will catch your attention as you are giggling, louder and louder.  This is sure to be requested repeatedly at bedtime and story time.  You need to have a copy for your professional and personal bookshelves.

To discover more about Ame Dyckman and Zachariah OHora, please follow the links attached to their names to access their websites.  Zachariah maintains a Tumblr account.  At the publisher's website you can download an activity kit.  At Scholastic's Ambassador of School Libraries, John Schumacher's blog, Watch. Connect. Read., the cover is revealed as well as the book trailer premiere.  Zachariah OHora is featured on Brightly and PictureBooking, Episode 72.  I know you'll enjoy watching the fun and funny reading of this book by Ame and Zachariah at KidLit TV Read Out Loud.
Posted by Xena's Mom at 8:46 AM