Christmas celebrations around the world are indeed a time to honor the holiday but they are also a reflection of the country in which they are observed.  They are steeped in traditions born from history going back hundreds of years. One constant in many of them is the Christmas Eve evening appearance of a generous being, an individual known by many names. 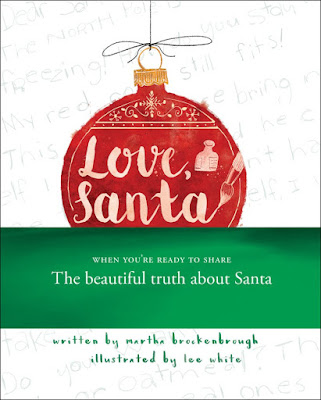 One of the names given to this visitor is Santa Claus.  He is said to fill stockings with gifts hung from fireplace mantels, door knobs, bedposts or other designated places.  He may leave presents under a Christmas tree.  In return a beverage and sweet treats, milk and cookies, are left for him.  Some people even leave bunches of carrots for the reindeer said to pull his sleigh around the world in a single night.  Children may write him letters sending them to the North Pole or left next to the milk, cookies and carrots.  As children our belief in Santa Claus is strong, so strong that as adults we do not relinquish the habit of hanging up stockings.  We know they are still filled on Christmas Eve but the gifts last a lifetime.  Love, Santa (Arthur A. Levine Books, an imprint of Scholastic Inc., September 26, 2017) written by Martha Brockenbrough with illustrations by Lee White is a story to cherish, leaving a print on your heart to carry for the rest of your life.

When Lucy was five, she wrote Santa a letter.

In this letter to Santa, Lucy did not ask for any gift but she voiced her concern for Santa. She wondered how he was able to keep warm at the North Pole.  That year for Christmas she got a red coat from Santa.  It was the perfect present for a growing girl.  He also left her a letter enclosed in a red envelope with her name on the outside.  It answered her question.

The next year Lucy wrote Santa another letter.  As a six-year-old she was a bit braver.  This year she asked for an elf.  She also gave Santa two other options; one regarding her gift and the other with respect to his preference for cookies.  Wisely, Santa responded to the offered options.  She received another note tucked inside a red envelope.

By the time she was seven Lucy had a lot more questions for Santa.  She wrote two letters that year.  She only left the second one next to his plate of cookies.  She was not quite ready for the possible answers to her queries.

As an eight-year-old, Lucy wrote her final letter.  It had a single sentence, a question.  On Christmas Eve she placed it in a different spot.  Very early on Christmas morning Lucy found the familiar red envelope addressed to her, waiting to be opened.  The words penned to her changed Lucy and they will change you too.  They sing of the miracle of Christmas.


On the back of the book case Martha Brockenbrough writes a letter to readers.  She explains the personal experiences leading to this book.  The lens through which Martha views life is clearly present in all her books but never more sharply in focus than in this title.  Her gift is to find the essence of a situation (and of the people within it) portraying it (them) with beauty and truth.

By first presenting the written correspondence between Lucy and Santa, we understand how the relationship unfolds and leads to the final two letters.  Lucy's letters to Santa are exactly as you would expect for a girl her age for each year.  Particularly heartwarming are the responses provided to Lucy in Santa's letters and the gifts left for her.  Lucy is well-known and deeply loved.


Upon opening the white book case you can see the faint green words spanning from the back to the front, left to right.  They are taken from the letters Lucy writes to Santa.  The wide green foil along the bottom is like the ribbon on a precious package.  The gold on the ornament, on the front, is also done in foil.  In the lower right-hand corner of the back, Lucy is shown reaching into the mailbox to place one of her letters to Santa.  The red flag is up, waiting for the mail person to send the letter to the North Pole.

The opening and closing endpapers are in the same hue as the ornament.  On the title page beneath the text, a pajama-attired Lucy with her cat is seated at her desk writing her first letter.  Rendered in watercolor and mixed media by Lee White the illustrations depict in single and double page visuals each year of the written conversation.

Delicate details and soft brush strokes portray an intent Lucy writing a letter and then move to a larger scene of a wintry landscape with Lucy mailing the letter.  Flawlessly Lee White moves from one perspective to another enhancing the words of the story.  He artfully places six actual envelopes within his images.

They can be opened and contain letters to be unfolded and read.  From Santa the envelopes are always red.  Lucy's letters are in envelopes with differing patterns over the course of the years.  For the final letter to Lucy it is slowly revealed over the course of five page turns.  Each of Lee's pictures supplies readers with a loving look at what the words are telling Lucy and us.

One of my favorite of many illustrations is one of the two-page images when Lucy is reading the final letter.  On the left Lucy holds the letter.  Above her on top of the red envelope is an enlarged portion of the letter.  Above this and extending over the gutter to the edge of the right page is a single evergreen bough.  Hanging from the branch is a sepia-toned ornament, filling up the entire right page.  A possible Christmas scene in Lucy's future is presented inside the ornament.


I can't imagine a personal collection not having a copy of Love, Santa written by Martha Brockenbrough with illustrations by Lee White.  I will be recommending it to every parent I can.  I read it over the phone last night to a colleague and good friend.  There was stunned silence when I finished it. We both might have been in tears.  Thank you Martha Brockenbrough.  Thank you Lee White.  This is a treasure to hold in a hug and in our hearts.

To learn more about Martha Brockenbrough and Lee White and their other work please follow the links attached to their names to access their websites.  On Lee White's blog you can view several of the interior images.  At the Vermont College of Fine Arts' website Martha talks about this title.

UPDATE:  Martha was a guest on NPR Weekend Edition Saturday talking about this title, December 23, 2017.
Posted by Xena's Mom at 12:45 AM