As Different As Their Makers

There are short ones and tall ones and fat ones and skinny ones.  All sorts of items, natural and man-made are added to further distinguish their physical characteristics. Just as there are no two snowflakes alike, there are no two snowwomen, snowmen, snow children or snow creatures alike.  Each one is as unique as its maker. 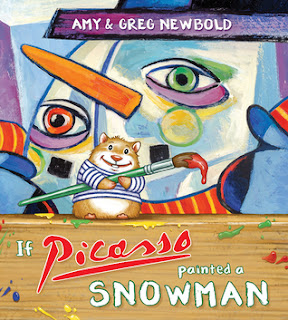 When we bring the activity of creating snow figures indoors, materials other than snow capture our attention.  Every kind of artistic medium can be used, paper, paint, crayons, colored pencils, glass, plastic, pebbles, fabric, wood, foam, chalk, dough, tin, string or yarn.  The list is only limited by your imagination.  It would be safe to say author Amy Newbold and her artist husband Greg Newbold have supplied readers with an entirely unique approach to depicting snowmen.  If Picasso Painted a Snowman (Tilbury House Publishers, October 3, 2017) is a gallery of seventeen notable painters.

If someone asked you to paint
a snowman, you would probably
start with three white circles
stacked one upon another.

Depending on your personal idea of a snowman, you would embellish it with other details.  The more popular additions would be a carrot-shaped nose, large dots for eyes and a group of smaller dots for the mouth.  You might add stick-like arms or an article of clothing, a hat or mittens.  To demonstrate this approach a cheerful, chubby hamster using brush and ink draws a simple snowman.

An exploratory adventure begins when an unseen narrator says:

But if Pablo Picasso
painted a snowman it
would look like . . .

A page turn reveals the rather satisfied hamster holding a paint brush covered in red paint with a tube of red paint spilling out next to him.  On the opposite page is a snowman portrayed in the style known as Cubism.  Elements are rearranged and removed.  Excitement follows page by page.

Within a murky haze we are asked to find a single snowman.  A superhero snowman comic-book style swings a fist as a loud BLAM! in red letters explodes on the canvas.  A stark desert landscape hosts a snowman with a skull and antlers for a head and a lush floral array in its center.  Can you identify the three artists?

A brightly colored quilt wraps around a snow family.  Haystacks stand with snowmen like sentries.  Pablita Velarde's birds keep company with her snowman.  Is there a snowman hidden in the Jackson Pollack splatters?  No one can fail to recognize the painter who might have depicted snowmen languishing like wet noodles on an alien plain or the two snow people standing in front of buildings straight out of Americana, the one holding a shovel upright.  With each revelation our knowledge grows.


In a paragraph at the end of the book, Amy Newbold reveals, on a visit to the Musee Picasso in Paris, a single thought became the impetus for this book.  For each painting in this title she has provided readers with at least one declarative sentence or a question.  These include the artist's name.  Here is an example.


The unfolded matching dust jacket and book case give readers a preview of the wonder to be seen in this title.  The hamster guide and artist, holding a recently-used paintbrush, seen in nine of the paintings is introduced to readers.  To the left, on the back, a quote from Pablo Picasso is shown on a crisp white background over tubes of paint, brushes and a pencil.  Along the bottom are five thumbnails of interior work by five painters.

On matte-finished paper the opening and closing endpapers are done using Jackson Pollock's technique in shades of black, white, blue, gray and yellow.  On most of the pages an element relative to art is placed; tubes of paint, brushes, pencils, a jar of ink, crayons, a ruler and a protractor.  Attentive readers will notice extra details; the striped shirt the hamster wears for Picasso, a beret he dons for Claude Monet, his tiny footprints left in a trail on the Jackson Pollack pages, or the thin curly mustache he grew for the Salvador Dali image.

Artist Greg Newbold through meticulous research replicates the techniques and styles of each of the seventeen painters focusing on those most notable works.  Some of his illustrations span a single page, edge to edge.  Others appear as a large portion of an artist's canvas.  Several cover two pages crossing the gutter.  Two are placed playfully with overlapping corners, as if waiting to be hung on a wall.

One of my many favorite paintings is for the artist Georges Seurat.  In hues of blue, green, yellow, orange, and red, thousands of dots form a snowman in a wintry field next to a bare tree.  Wearing only a scarf with a closed umbrella clasped in one stick hand, he stands in contented silence.  This spans from right to left across one page, over the gutter and into a third of the left side.


Art educators and those interested in art are going to be thrilled with If Picasso Painted a Snowman written by Amy Newbold with illustrations by Greg Newbold.  In fact, even those who don't believe they like art will enjoy this book. The premise of using a snowman, in which most can identify, to present the artists is a marvelous idea.  On the final two pages, the hamster invites you to paint your own picture on a page showing a blank easel you can replicate. The next six pages give more information about the artists.  As a final note Greg gives artists three key points of advice.   It might be fun to ask students to research other artists and create snowmen as they would.  If you are doing a Mock Caldecott unit, you might feature snowmen as drawn by Caldecott artists.  This title would be a welcome addition in your professional and personal book collections.

To learn more about Greg Newbold and his work please visit his site by following the link attached to his name.  Greg Newbold also maintains an Instagram account.  You can find additional biographical information about both Amy and Greg at the publisher's website.
Posted by Xena's Mom at 12:44 PM