There is nothing better than reading a book for the first time.  When you see the dust jacket unfolded, the different book case, the opening and closing endpapers which are not the same and are a part of the visual story, certain interior illustrations and specific sentences in the text, it is a distinctive experience.  There are books which strike a chord in your reader's heart so clearly the place you read them, who is with you as you read them together and the emotional impact you feel during and after the reading will remain with you always. 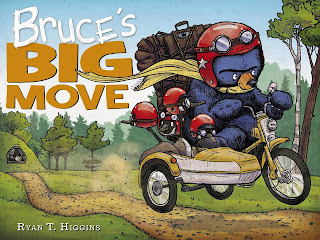 This fall in a good friend's classroom it was imperative quiet be maintained for the activity in which the students were engaged.  The problem was his principal and I were reading the third book in a humorous series for the first time.  With each page turn our desire to burst out laughing increased.  We were filled with barely contained mirth until we closed the cover.  Then we had to take several deep breaths to regain our composure.

The book is Bruce's Big Move (Disney Hyperion, September 26, 2017) written and illustrated by Ryan T. Higgins.  The first title, Mother Goose Bruce, introduced us to a grouchy bear whose craving for egg cuisine found him in the unlikely role of mother to four geese.  Three mice appear in the second book, Hotel Bruce, turning Bruce's den into a woodland getaway for visitors when he and the four geese are vacationing in Florida during the winter.  Bruce is barely able to keep his short-tempered self under control.

Bruce was a bear who lived
with four geese because
he was their mother,

and three mice
because they would not leave.

With the mice's desire for continuous projects, the state of Bruce's once peaceful abode could be categorized as total chaos.  There were no more quiet baths with shouts of CANNONBALL echoing in the bathroom as eight individuals crammed into the tub.  Bruce tried every trick in the book to banish the rambunctious rodent residents.  Nothing worked.

Bruce had no choice.  He packed a couple of bags, loaded the geese into a side car and roared down the road on his motorbike, moving to a new location.  Finding the perfect new house was harder than hard but Bruce was no ordinary bear.  A cabin by a lake near a meadow was utterly perfect.  Well, almost.  Friendly neighbors could be annoying.

After the extended time with those mischievous mice, Bruce could actually smile at their absence.  The four geese were not as happy.  In fact, they were downright dejected.  Bruce tried every trick in the book to banish their blues.  Nothing worked.

The appearance of an unexpected vehicle in Bruce's yard instantly perked up the geese.  In fact, they were overjoyed.  The bear could feel his contentment fleeing . . . fast.  A housewarming?  Frying-pan ball?  Nothing was ever going to be the same.  Or was it?


The hilarity Ryan T. Higgins makes with his words begins even before you finish the first sentence.  The narrator in a matter-of-fact voice states an obvious contradiction, Bruce, a bear, is the mother of four geese.  In the next sentence the comedic contrasts continue with a combination of narrative and dialogue.  How many mice do you know who would ask a bear, who clearly does not want them there, if

we could fit a 1950 Panel Truck in the living room?

The short, meticulously formed statements provide flawless pacing.  They are ideal companions for Ryan's marvelous illustrations.  Here is an example.

No matter how hard Bruce tried, the mice would not leave.

Bruce is right!
We should go out
and get some fresh air!

Thanks, Bruce.
You're always
looking out for us.


In all honesty looking at the front of the dust jacket without bursting into laughter is impossible.  Those geese with their helmets and goggles in the side car are hysterical.  The determined look on Bruce's face means he is totally at his wit's end.  There is no way he is ever going back to his den.  To the left, on the back, on a canvas of textured grass green is an image of the mice in a basket with four balloons, red and yellow, carrying them away.  The majority of the balloons are outside the image frame of sky and clouds.  This picture and the text on the front are varnished.

On the book case on a background moving from golden orange-yellow along the bottom to a hue of blue at the top is Bruce on his motorbike.  On the front and the back we move close to him.  First he is leaning over the bike handle bars, riding the road, helmet and goggles in place.  His scarf is streaming behind him.  To the left, on the back, the point of view is lower.  We are privy to the back end of Bruce seated on the motorbike.  His license plate is guaranteed to bring out a few giggles.

As the sun rises in the woods on the opening endpapers we see the mice mess surrounding Bruce's den.  A FOR SALE MOVING! sign is tacked to a tree.  As to the closing endpapers, they are a wonderful, unexpected surprise.  (My lips are sealed.)  With a page turn at the beginning, on the left, we are given a peek at what is to come for Bruce and company.

Rendered using scans of treated clayboard for texture, graphite, ink and Photoshop the illustrations are single page, double page and two smaller illustrations on a single page.  Their contents are in sharp contrast to the text providing continuous laughter.  The details in each one are exquisite; the newspaper and cardboard castle built by the medieval-costume-wearing mice, the mess from all their projects and activities, the words spelled by the wooden blocks, the fabric used for Bruce's chair, the wallpaper in his den, the interior of the new home and the lamp next to Bruce's bed.  And remember the mention of the 1950 Panel Truck?  You won't believe how it's incorporated into the visuals.  What takes everything over the top are the expressions on Bruce's face.  You can't help but love this grump!

One of my many favorite illustrations covers two pages.  Bruce is sitting in a sudsy, filled-to-the-brim claw-footed tub.  Water and bubbles cover the floor with more coming over the edge of the tub.  Three geese and two mice are already in the tub.  A goose wearing a face mask, snorkel and flippers is waiting to join them.  A mouse yelling CANNONBALL is about to make a splash.  He and two other occupants are wearing a face mask, and snorkel.  Bruce is completely disgusted.


The happiness this title, Bruce's Big Move written and illustrated by Ryan T. Higgins, will generate in readers and listeners is sure to echo in rooms as laughter.  I can't wait to read it aloud and hear the children ask me to read it again.  No bookshelves in your professional or personal library should be without this title.  We all need the humor this bear, his four geese and three mice give us . . . more than ever.

To read and learn about Ryan T. Higgins and his work please visit his website by following the link attached to his name. Ryan maintains an Instagram account.  You are really going to enjoy the chat between Ryan and Roger Sutton at The Horn Book.  It's a must read.  At HuffPost you'll learn more secrets about Ryan and his Bruce books.  Don't miss the chat at Let's Talk Picture Books with Ryan about this title.  This book trailer is fantastic!